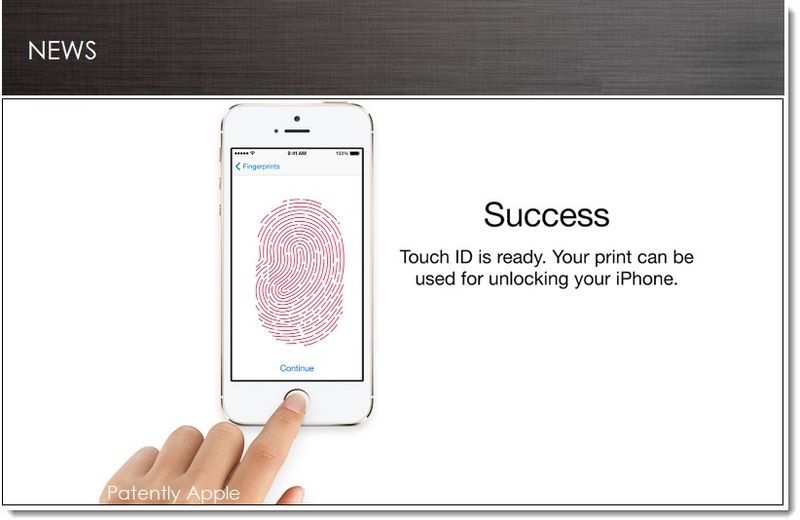 When it comes to next generation biometric authentication for mobile devices, Apple succeeded with Touch ID where Samsung failed. For that matter, all of the rumors from the Korean press that LG would steal Apple's thunder on a fingerprint scanner were pure fantasy. Apple's technology was intricately crafted and invisibly presented to consumers using the all-familiar Home Button. Apple's new fingerprint solution was intelligently designed and is powered by Apple's new 64-bit architecture to capture a user's fingerprint image in the blink of an eye. Apple is likely to be the only company with a smart "area type" sensor as Android OEM's will now scramble to use technology from Korea's CrucialTec.


The Korean press isn't happy that Apple beat Samsung and LG to market with a sound fingerprint solution and downplays Apple's advantage.

The biggest advantage of the area type is the intuitive fingerprint recognition environment. On the other hand, states the Korea Times "it is difficult to make the sensor smaller, it is limited in terms of where in the smartphone it will be installed, and the prices of the parts are over 3 times more expensive than those of the swipe type. The swipe type can have various shapes and be installed anywhere …"

Yet that's not true in Apple's case. A new Apple patent clearly illustrated that their biometric reader could be placed on the side (or topside) of devices. Furthermore, Apple has patents that indeed utilize the swipe-type of scanner should Apple ever require it.

Apple's Touch ID will work with iTunes, so secure e-commerce transactions are now in place. While the Korean press tried to put a positive spin on the swipe type of scanner, the fact is that this technology has a glaring potential problem, especially in e-commerce applications. According to the report, the swipe type "has a lower recognition rate than the area type."

This is why Apple chose to go the route that has been proven to be more accurate, in spite of it being more expensive to implement. In fact, Apple went as far as integrating a sapphire glass button so as to be able to better read the fingerprint at the sub-epidermal layers of the skin to ensure that the fingerprint is from living tissue.

Do you think that Android OEM's have much interest in going the extra mile in research to get their future fingerprint scanners just right? – Of course not. That's not what copycat manufactures do. But now that Apple has this in the market, the Korean OEM's like Samsung and LG will be burning the midnight oil to get their somewhat smart devices up to par with Apple's truly innovative Touch ID biometric reader. On this innovative front, Apple is clearly the winner, hands down.

The last 3 paragraphs are perfect.

Our report is conveying what was in the Korean report, which of course only sees Apple as the enemy. So thanks for taking the time to make a comment on our site that adds another fingerprint scanner supplier to the mix.

The report states that "The global leaders in the fingerprint recognition solution for mobile devices are US-based AuthenTec and Korea's CrucialTec."

How about Fingerprint Cards [Sweden] and its world-leading position as a supplier of capacitive fingerprint technology, with highest quality, best image quality and lowest power consumption. www.fingerprints.com

The last paragraph is so spot on.