Is Samsung's Smartwatch Sales Headed for Disaster and Will a New Smartphone with a Flex Display Really Matter?

The Korean Press is reporting this morning that Lee Young-hee, executive vice president for marketing at the company's mobile division, stressed its first wristwatch ㅡ the Galaxy Gear ㅡ is "definitely receiving a warm response." He added that "The Galaxy Gear is a wow product. It's a wholly new and must-have accessory," downplaying growing criticism about the wristwatch. The funny thing is that another Samsung official laughingly shot his boss in the foot by stating that the Galaxy Gear lacked something special. Ouch – how embarrassing is that?


The Korea Times stated in their report that "Samsung declined to unveil sales targets for the Gear. Lee also denied a rumor that Samsung was in the process of developing a new Galaxy Gear." Yet another Samsung official went on record to say that "We've acknowledged that our Gear lacks something special. With more investment for user interface and user experience, Samsung devices will be better in terms of customer satisfaction."

Beyond another "Samsung official" acknowledging that their Galaxy Gear has nothing special about it, they're already on record designing another Gear product despite their President's public denial of such. The new design shows an advanced concept. Why would anyone buy a Samsung dumbwatch now when something better is on the drawing board? It's not a rumor that there's a new "Gear" design on the books, it is a matter of public record at the US Patent and Trademark Office.

In a new report published by DigiTimes that is now only available to paid subscribers titled "Sony/Google relationship to affect Smart Watch 2 sales," they reported that Sony's smartwatch was the leader in this field and that Sony was on track to sell one million units in 2013. This is supported by an August assessment by Juniper Research which clearly stated that a million smart watches may sell this year.

Think about it: a million smartwatch units this year would only mark one-sixth of the "Apple TV" sales for the first five months of the year. Apple considers that sales level as being one of a "hobby" product.

So will Samsung sell tens of millions of the Galaxy Gear this quarter? I highly doubt it and a new report published today suggests that smartwatches are proving to be a very hard sell indeed. The report states that "Wearable devices such as smartwatches are seeing trouble prompting consumers to taking out their wallets. Although consumers seem eager to make inquiries or try out wearable devices, not many are willing to make a purchase, according to sources from channel retailers."

So unless Samsung desperately gives away their Galaxy Gear by way of promotions to artificially pump up their numbers, this product will go down as one of the sales disasters for 2013.

So why did Samsung jump on the smartwatch bandwagon with a half-baked products so early on? Because Apple had a futuristic patent-pending wearables computer on record, that's why. The press was pumped about Apple's idea to a fever pitch level that obviously fooled Samsung. It's clear to me that Samsung's paranoia is having them jump at Apple's shadow. Does that sound like a leader to you?

The Apple community is all too aware of the dirty trickster and obsessed copycat called Samsung. While their "market share" of garbage phones has impressively fooled much of Wall Street into equating a dead-stat to that of being innovative – Samsung's latest missteps have shown the world that a company who sells more of something doesn't automatically translate into being an innovative one.

When Apple's patent pending wearable's computer came to light, the press jumped on the news as if it was going to be something released in just a few months. So Samsung went into high gear jumping at Apple's shadow. No way was Samsung going to be a follower of Apple's on this emerging market front. No way. Being the so-called new innovator in the mobile space, they would show the world their greatness! Samsung went on to introduce the Galaxy Gear to yawns while Apple simply shrugged it off without breaking a sweat.

In respect to a wristwatch-like wearable computer, Apple's CEO Tim Cook stated during his D11 interview that "the ones that are doing more than one thing, there's nothing great out there that I've seen. There's nothing out there to convince a kid who has never worn glasses, or a band or a watch to wear one. So there's lots of things to solve in this space, but it's an area where it's ripe for exploration …" I see it as something as another key branch of the tree. I think wearables could be another branch on this." Then Cook quipped that it would be something to discuss at D20 (which would literally translate to being the year 2022).

When pushed on where Apple stood on wearable computers, Cook stated that Apple's interested in a "great product." He thought that the wrist was interesting. Though he quickly added that "If we had a room full of ten to twenty year olds and we said everybody stand up who has a watch on, I'm not sure anybody would stand up. I just don't see it. If you look at what kids are wearing … their watch is this (pointing to an iPhone)."

So yes, Apple is interested in the wrist as an area for future wearables and it's something that could materialize down the road. But Samsung thought Apple had it ready to roll this quarter or thereabout. And without the ability to copy the innovation from a future Apple iWatch, Samsung is already lost and confused by admitting that there's nothing special about their smartwatch.

Samsung the innovative leader – may my ass! (Thanks Phil Schiller, I just had to borrow that line). In the end, like all good copycatters, Samsung generated a lot flash and bang, song and dance about a smartwatch that in the end will boil down to whole lot of nothing.

Will Samsung Shock the Market with a Cool Flex Display?

Even Samsung knows that their dumbwatch is going down in flames as a disaster and so in their press conference today they threw in the mystique of a new smartphone coming to market this year that will be outfitted with a curved or flexible display.

Sounds cool doesn't it? Yet the real question is, will their first smartphone with a flex screen end up looking like this ho-hum design or will they shock us with an advanced design like this one or perhaps even this one? 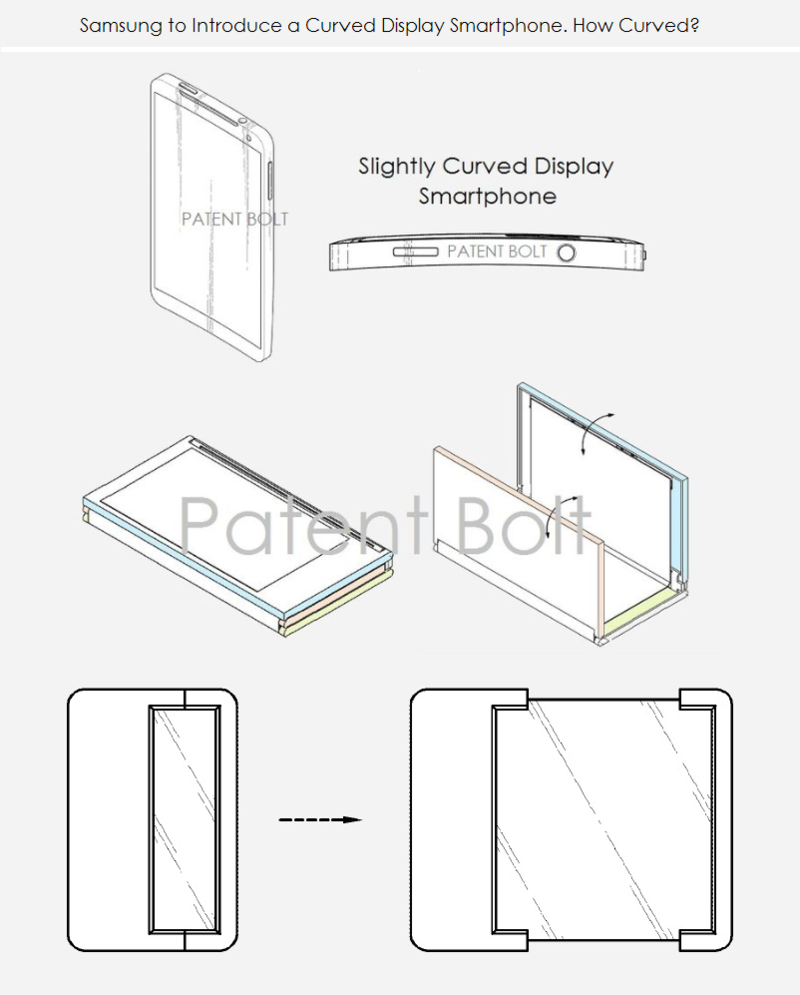 Time will tell what Samsung meant by a curved and bendable display, but I'm certainly not going to be holding my breath awaiting a show-stopper of any kind. Then again you never know. If you have a comment or prediction about Samsung's upcoming smartphone with a flex display, or think differently about the Galaxy Gear sales potential, send in your comments below.

possible.
As soon as Samsung got orders to make 64-bit processors they must have scurried on to make one of their own too.
probably no fingerprint scanner but 64-bit processor and slow mo video are very likely.
especially considering slow mo videos have been around for quite a while now..

I think samsung will release a new flexible display soon.
It was showing it off like what an year ago??
just another typical gimmick that only samsung would think of.
but then they need flexible batteries and flexible processors right?

Samsung is trying it's best of course.
But it's best is pretty terrible and it just manages to fill it's phones with terrible software that takes up 7GB of memory and a lot of battery if left on.(also know in the samsung world as "features")
The galaxy gear is basically just a watch with android and a few features of a smartphone.
or rather, a wearable smartphone which is not even half as functional because any smartphone can tell you the time.

Well, thanks for this smart article and your point of view. I don't think that Samsung is ready actually for flex display, certainly in 2015, 2016

I've never read a blog with so full of bias. At least Samsung is trying to make new devices with more new features than annual increments made from Apple. From the touchscreen to the App Store, that was the only major hit that Apple can boast about.

And just as Apple came up with the first touchscreen smartphone, Samsung (not Apple) is the one first with the smart watch that will make noise. All gadgets are subject to upgrades. We'll see what the Apple smart watch has in store for the public.

Finally, it's safe to assume that the 2nd generation Galaxy Gear will be compatible with all smartphones (excluding Apple).

I believe Google did the same with NFC after there were rumors that Apple would be using the tech in upcoming iPhones. So far it's largely been a dud!

Well written! So you think the S5 is going to get finger print scanner, slow mow video, and 64 bit processor?