According to a new IDC report, the worldwide mobile phone market is forecast to grow 7.3% year over year in 2013, marking a sharp rebound from the nearly flat (1.2%) growth experienced in 2012. Strong demand for smartphones across all geographies will drive much of this growth as worldwide smartphone shipments are expected to surpass 1 billion units for the first time in a single year. Worldwide smartphone shipments are forecast to grow 40.0% year over year to more than 1.0 billion units this year with strong gains in emerging markets and the sub-$200 smartphone segment. IDC's report presents a forecast of Smartphone OS growth, and they don't see Apple's iOS gaining much ground going forward.


IDC's report states that iOS will remain the clear number two operating system as the expected launch of a lower-cost iPhone will open up a wider addressable market. Apple will also grow faster in subsequent forecast years due to enterprise and emerging market share gains that will be driven in part by a likely deal with China Mobile, which will give it greater reach into one of the world's fastest-growing smartphone markets. However, iOS share gains will be tempered by the relatively high price points of the iPhone, which makes for a lower share ceiling. 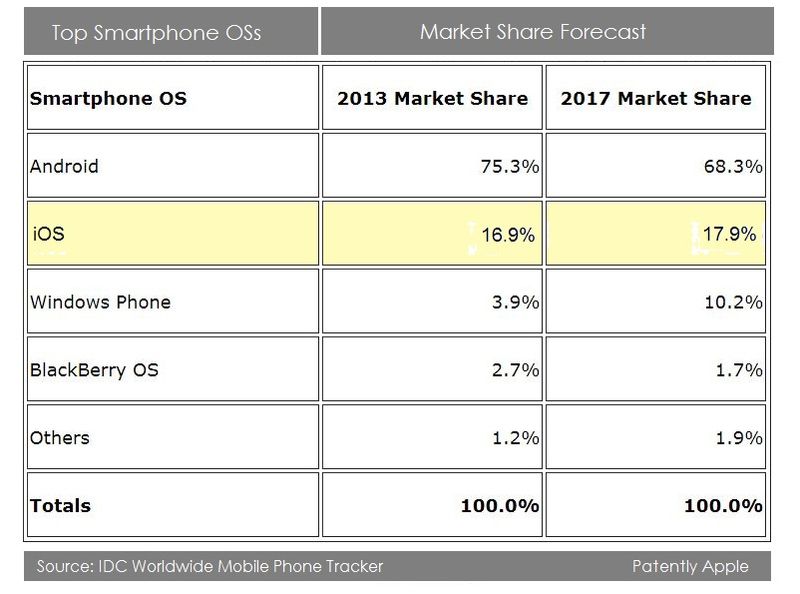 Looking at the IDC chart I think that the Windows Phone OS will in fact make gains in the market over the next five years and the percentage seems to be fair. BlackBerry may not be around and may very well end up in Microsoft's hands which would further justify the Windows Phone OS positioning.

Apple's numbers, however, may be a bit low if you consider that they may continue to expand their lineup of smartphones over the next five years. Will Apple's "iOS for the Car" service count in this race considering that it's part of the hands free phone service? And considering that Apple's iPod family over the years ended up covering the high-end iPod touch right through to the low-end iPod shuffle, I'm a little more optimistic about Apple having a mass market lower end iPhone over the next four to five years.

At present, Android is at every price point and Apple's iOS for iPhone isn't. So Apple has a lot more headroom for growth with a steady plan to cover more price points over time. What's your take on the new IDC forecast? Do you agree or disagree? Send in your comments.

Apple fans believed in that position as Apple was about to close their doors in 1996. You could stick your head in the sand all you want but a company with 10% or under will have developers fall off like flies. Dream on as you will.

I don't think it matters all that much if Apple never has major smartphone market share. It would seem that as long as Apple sells higher-priced smartphones, the lower cost smartphones will always be sold in higher numbers. The only thing that matters for Apple is that they can continue to sell about the same amount of smartphones profitably every year. Every company reaches some point where they can't increase market share but maintaining market share is also difficult. Holding market share for years doesn't have to be necessarily detrimental for Apple. Smartphones can be an anchoring point and Apple can come out with other products to boost revenue or profit gains.

IDC keeps posting these high MS Windows Phone number time and again, when will they learn? I guess they are piggy backing on ms investing in them.

Why would windows gain such high marketshare? Whos to say it won´t completely collapse?

IOS might SURGE. Who knows. it all depends on the next couple of years, talking about 2017 is premature.

I seem to remember a certain CEO uttering these lines. And many of his peers parroting the same exact words. If there's one thing I've learned following the tech industry gossip or analysis, its to never count Apple out. When consensus says Apple will fail, reality historically has always disagreed.

With Apple obviously intending to expand their iPhone lineup as soon as this month, and likely more to follow in the years to come, I can't help but think the same-old analysts with the same-old formulas and theories just can't account for an outlier like Apple.