IDC Forecasting Huge Leap in iOS Adoption in China for 2014

South China Morning Post quoted James Yan a senior analyst at IDC China as saying that Apple's share in the world's largest smartphone market, which has declined dramatically in the face of strong competition from Samsung Electronics and popular mainland brands, "is expected to remarkably improve with the launch of the new iPhones on China Mobile's network." The IDC chart indicates that iOS adoption could double in 2014.


Smartphone shipments on mainland China are predicted to exceed more than 450 million units next year, following the issuance of 4G mobile licenses and an expected deal allowing China Mobile to launch new iPhones next year.

A report by Barclays said: "We see it as highly likely that an Apple-China Mobile partnership could be announced once 4G licences are issued in China and the timing on China Mobile's commercial 4G service launch is clearer."

IDC said Apple's collaboration with China Mobile and the availability of a lower-cost iPhone will help drive the adoption of the iOS mobile operating system next year. The IDC chart that is noted below was published today. It indicates a clear doubling of iOS market share for 2014. 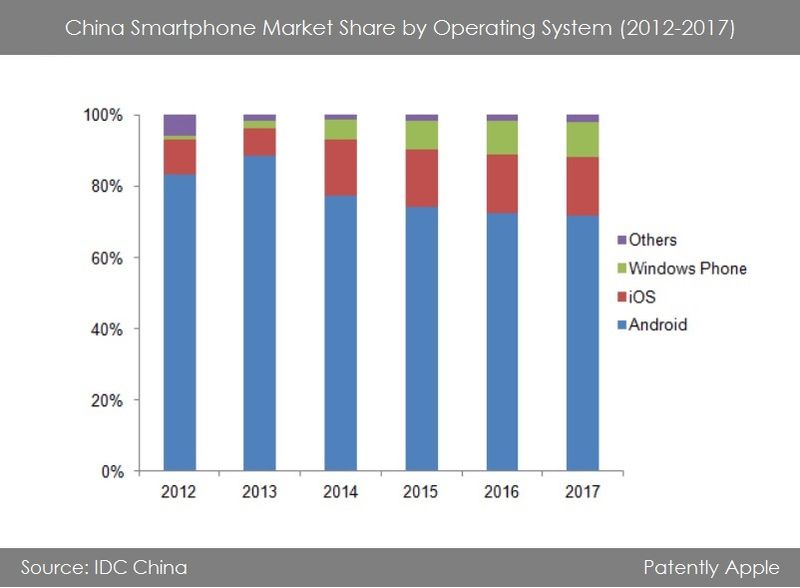 The South China Morning Post noted lastly that technology research firm IHS has forecast Apple to ship 86.1 million iPhones in the second half of this year, up 25 per cent from 68.7 million in the first half. It said Apple's estimated 154.8 million iPhone shipments this year could receive a boost if China Mobile started carrying the new models by the fourth quarter.

IDC are paid ms shills. Every single one of these reports always show a *huge* MSFT growth. And each year it turns out to be a dud.