Last week the US Patent & Trademark Office published a surprising patent application from Broadcom. The company's patent filing reveals a new design for a gaming console with some new thinking behind a series of gaming controllers. Has Broadcom been commissioned to design a new gaming console by a partner not wanting the design to be discovered or are they designing a gaming console to showcase their future chipsets and wireless technologies? That's for you to judge. Our report covers the Broadcom gaming patent, the general buzz around a possible new gaming controller for iOS and a few twists along the way that includes a look back to a 2007 Steve Jobs keynote slide that some might find interesting.

CNET posted a report yesterday titled "Apple's big bet on iOS 7 gaming to play out this fall." In the report, Nick Statt writes that "with the new A7 chip's 64-bit architecture, Apple is signaling to the world that it's dead set on remaining the preeminent mobile-gaming ecosystem." One the new additives brought to iOS 7 is OpenGL ES 3.0.

Bernard Kim, SVP of Mobile Publishing at Electronic Arts was quoted by CNET as saying that "OpenGL ES 3.0 delivers stunning visual experiences, which will be immediately apparent on EA's graphically rich 3D titles such as Real Racing 3 and Madden NFL 25, as well as FIFA 14 by EA SPORTS and Heroes of Dragon Age, which will launch this fall."

While many snubbed Apple's decision to leap to a 64-bit architecture for iOS, they'll be choking on their words this fall if in fact these great gaming experiences pan out.

Apple began hinting of a future gaming controller back in November 2009. In 2010, Apple illustrated an iPhone controlling a gaming console. In June of last year another Apple patent came to light about a remote controlling gaming and adopting a "Custom Controller." Then in April of this year a new published patent pointed to a simple gaming controller with pivoting buttons. This was followed by yet another published patent relating to a strange gaming accessory for the iPhone or iPad.

In respect to a "custom controller," there have been hints in the press about third party developer gaming controllers on the way. That's what made Broadcom's patent application so strangely attractive.

In Broadcom's patent background they state that "most game consoles support many differing games, which are software controlled via respective software programming. Sometimes game controllers are specific to the particular game being supported, e.g., guitar hero, rock star, and various other particular types of games.

In such cases, these various types of inputs must be supported by differing unique game controllers. The expense and complexity of the multiple game controllers can be overwhelming for some users from a cost standpoint." This is the problem that Broadcom's patent provides a solution to and beyond.

Without going into too much detail, Broadcom provides an overview of a gaming console connected to a TV with multiple wireless handsets being able to participate in a video game. 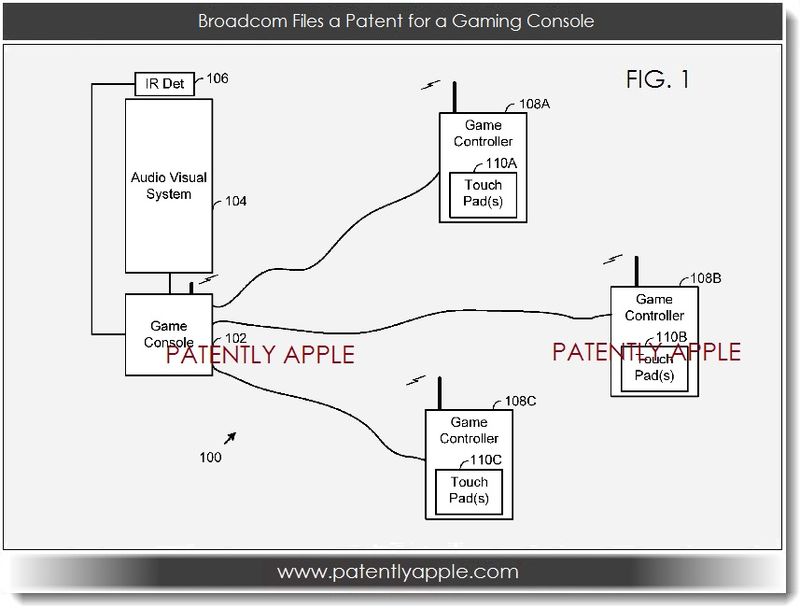 Further into their filing, Broadcom states that "because the touch sensitive panel of the present invention game controller is very configurable and not limited by mechanical button limitations, the touch sensitive panel may be configured at different points in time to have particular touch sequence input functions. This sequence of touch pad inputs may be similar to keypad shortcuts and may be customized by a user."

In another embodiment of Broadcom's invention which they don't illustrate, the game controller and game console functionality are merged into a single device, i.e., all-in-one video game platform. This device will also include a display that user views when playing a game supported by the device.

According to Broadcom, "When patent points #304 and #308 are both touch pads, they receive touch pad input that may be used for user identification, gaming input, or other operations supported by the gaming system and includes game controller. In patent FIG. 7A we see is a diagram illustrating how a user's hand may overlay a touch pad. Broadcom notes that while the touch pad is generally illustrated as planar, the touch pad may wrap around a gaming steering wheel, gear shifter, door handle, or another vehicle component.

Broadcom further notes that each of a plurality of touch sensitive pads of the game controller may be reconfigured by the game console based upon a game being played.

A Leap to the Future: Video Gaming Headsets

In 2006, Apple's John Tang and Toni Fadell (one of the original pod-fathers) designed a video headset which was spread out over three distinct and lengthy patent filings that Patently Apple first reported on in 2008. 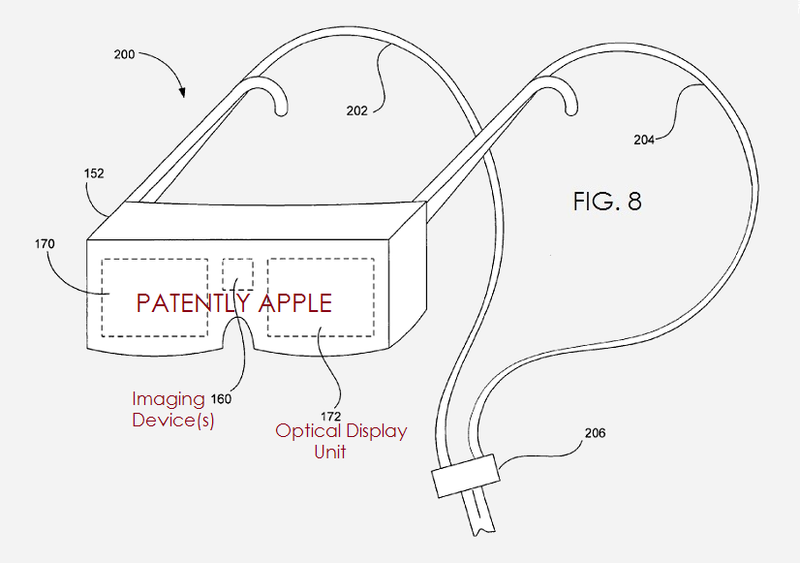 The video headset as shown in the first graphic above was designed to cutoff any peripheral views outside of the headset. This was to immerse the viewer into a special work project, a movie, a music video or video game.

Recently a Microsoft project came to light that revealed a new video gaming accessory system that would immerse the gamer into an environment by projecting the gaming environment onto the walls of the gamers room. A video of this new feature could be seen here. Although the idea is right to want to immerse a player into a game, its execution with home furnishings in the way doesn't really pull the effect off as one would hope for. Hence, a video head mounted display or specialty video glasses would accomplish this task in a superior manner.

Interestingly, the immersive experience that John Tang invented for Apple's Head Mounted Display recently popped up in Microsofts new system noted above. It's not a coincidence being that Tang is now a senior researcher at Microsoft.

Apple of course owns the patents to the video headset and so not all is lost. A leap to video gaming with a headset connected to a MacBook or an Apple TV would give Apple another killer device.

A company by the name of Oculus is taking that very idea and running with it as fast as humanly possible. As you can see above, the device resembles an iPad mini retrofitted into a headset form design. You can check out more of the details about the Oculus system in the video below.

In 2010 John Carmack of Quake fame developed the Rage game for iOS. Today Carmack is so excited about the possibilities of a video headset developed by Oculus that he joined the company as their new Chief Technology Officer last month.

If you watched the noted video, then you know that many developers are really excited about this next generation gaming experience brought about by Oculus. This is likely to be one of the next big things for gaming in the not-too-distant future. Will Apple be far behind?

At the end of the day, there's tremendous buzz beginning to emerge about Apple possibly making some announcements in the coming weeks related to advancing iOS game play. The most anticipated rumors talk about gaming controllers coming to Apple TV.

We've shown you that Apple has many patents covering a possible game controller and yet some rumors persist that that Apple will have third party developer's debut new gaming controllers.

On that twist, we were floored to discover that Broadcom, known to be a manufacturer of networking and communications ICs for data, voice, and video applications, has a patent filing on record for a gaming system with emphasis on unique gaming controller options.

Was Broadcom commissioned to develop a gaming system and gaming controllers by someone? Isn't Broadcom an Apple supplier? Yes, of course, but there's no direct link back to Apple just yet, so it's speculative at best. Yet some of the ideas from Broadcom's patent are interesting and noteworthy, especially using fingerprint ID for gamers. That feature alone raised my eyebrow.

The second Broadcom point was all about replacing most buttons with touch controls. That sounded very much like a similar point that Steve Jobs hammered home when debuting the iPhone in 2007. While I'd prefer an Apple game controller solution, options could be good as well.

In respect to a future video headset, I love the idea. I'd love to see that happen. As an accessory, I think it would be a market killer. Yet the timing of such a device is likely much further down the road.

I'll conclude this report by looking back to one of the greatest days in Apple's history: Their 2007 iPhone event. In that keynote, Steve Jobs pulled up a slide as noted below. He was explaining why Apple chose to pursue the Mobile Phone market. In that slide he showed a chart with leading 2006 device segment statistics. In it we see that gaming consoles sold 26 million units, digital cameras 94 million, MP3 Players 115 million, PC's 209 Million and mobile phones 957 million units worldwide. . 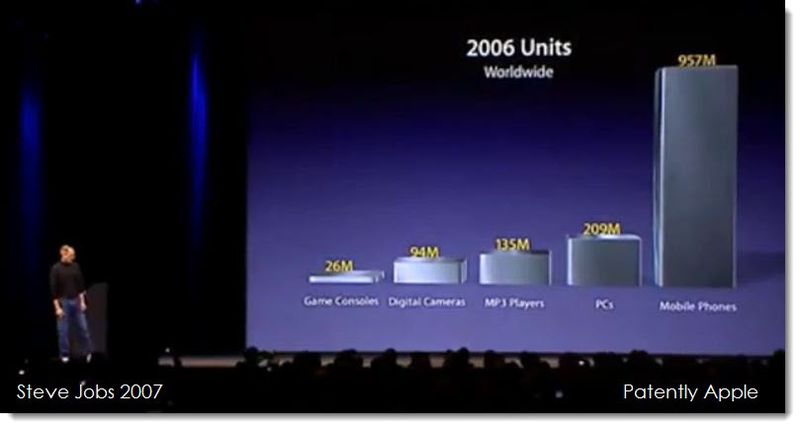 In hindsight, Apple's slide has almost turned out to be a roadmap. Apple's resurrection began to really take off with the iPod family to take over the MP3 player market. Then they aimed at the mobile phone market and nailed it. Then the iPhone added camera capabilities and has almost crippled an entire industry.

So what's left to conquer on that chart? Yes, the gaming console market. Apple's 2013 stats for mobile gaming are impressive and so advancing Apple TV to that of a gaming console with a new game controller would only make sense. Hell, it would be awesome to be able to play top tier video games using Apple TV instead of a competing console. I'm ready to buy a new gaming console this holiday season as are most gamers. So now would be the time to strike while this market segment will be at its hottest in many years. My head shakes just thinking of the possibilities.

Hmm, Apple crushing Microsoft on their turf would be so sweet, don't you think? After Ballmer gave the okay to run a new retarded anti-Apple, Anti-Steve Jobs ad, I could only hope that Apple would mercilessly enter this market and take the Xbox down in a single quarter over the holiday season.

Yet whatever Apple has up its sleeve for this fall, the buzz is on. Whether the hype surrounding such a big move into gaming is real or not will be known in short order.

For now, what's your take on the gaming-buzz? Will anything significant unfold in the coming weeks? Send in your comments below.

Strange, I was thinking something similar, especially with the Apple TV, even before reading this article.

Having a 64bit ARMv8 processor makes sense when you think about 4K television systems and the pulling out of the newly named M7, seems to be more than just trying to save a few cycles of clock power. Imagine the M7, now a separate chip, being installed in headsets, controllers, with the AppleTV unit housing the A7 processor. It doesn't make sense to have the M7 within the TV.

Apple usually ups the power of their chips for the iPad lineup, and it'll be interesting what they do in respect to this, especially with the GPU now split into controller and multiple processor cores for the shader units. This gives the chip the ability to be highly expandable with the cores attached to the controller, an altogether cheaper, and more importantly, expandable, solution to power computing.

Looking at the current benchmark stats for the iPhone 5s, gives you an idea of what a processor with dual cores can do. Double that and add a bunch of extra graphic processing cores and DDR3 fast memory into the mix and I'd bet you'll have an awesome number cruncher.

As for an actual gaming console, or gaming Apple TV, it's a little hard to say. Yes it would be amazing if they did produce something this year for the holiday season and announced it before the main launch days for Microsoft and Sony, but I doubt it'll happen this year.