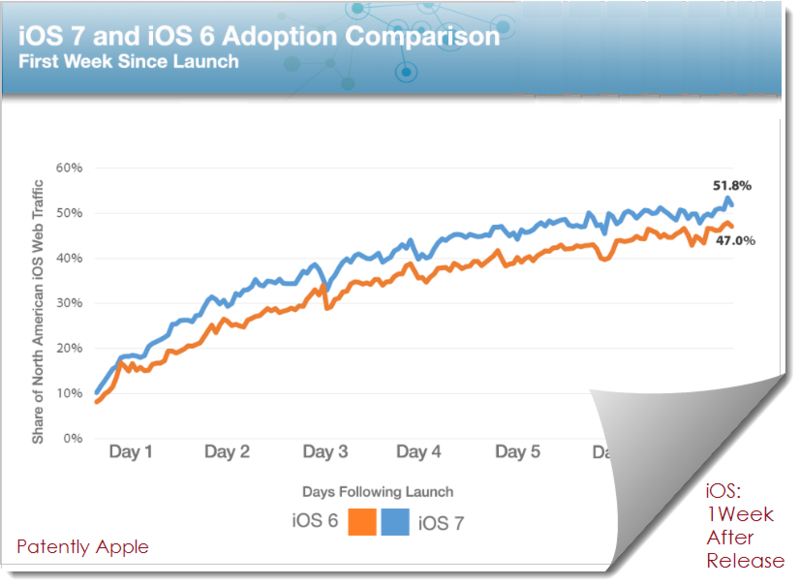 It's a simple statistic but one that shows that Apple's delivery system for iOS upgrades is vastly superior to Google's and that owners of Apple devices genuinely want to stay on top of the latest and greatest operating system upgrades. Statistics for months have shown that Apple's share of web traffic for iOS tablets is over 84%. That's about usage which doesn't get the attention in the press that it deserves.

In an interview with Businessweek last week, Tim Cook stated that he thought "that Android is more fragmented than ever and, as a result, when you look at things like customer satisfaction and usage, you see the gap between Android and iOS being huge.

There is a huge difference between market share of units and usage share. And it shouldn't surprise anybody that it's like that. Anybody that's used both should not be surprised that that is the natural result. And that's really important to us because we have never been about selling the most. We're about selling the best and having the best experience and having the happiest customers.

Happy generally means using more. You know, you find something you like. You do it more. And so I think that has become even more the case over the last year.

The quick adoption of iOS 7 now cruising past 51% in just 7 days is testament to Cook's argument.

Update: The news gets better. Another source known as Mixpanel now clocks iOS adoption rate at almost 63% as of today. (Thanks for the note Jim Neal)