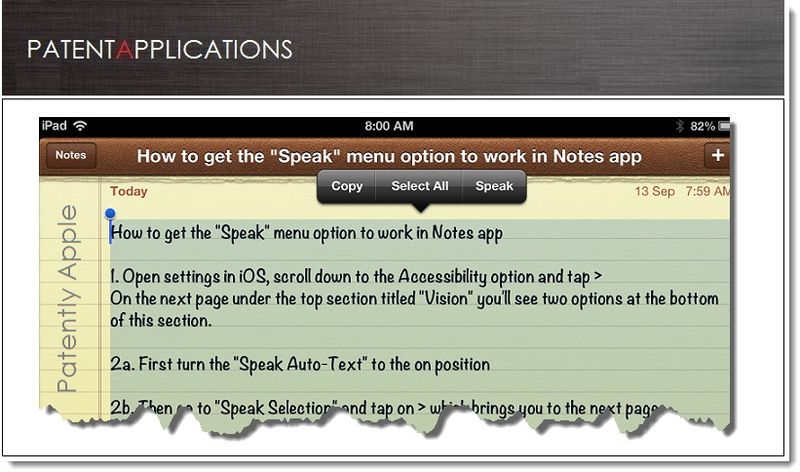 A new European Filing by Apple published yesterday reveals an update to the iOS "Notes" app. Not being overly familiar with the Notes application makes it difficult to assess the full extent of the upgrades that could be coming to Notes in the future. However, one option appears to illustrate a text-to-text conversion option which would be great for translations. For those wanting to further investigate the finer points of this patent could do so here. One of the current features of the "Notes" app is a "Speak" menu option which isn't a "standard" feature on Notes. Average iDevice owners would never know that this option even exists. Intuitive it isn't. Our report walks you through the steps that will turn on this feature if you'd like that option available to you in the future, whether you're disabled or not.


A Summary of Apple's Invention

In the future, Apple's current invention will enable a user to select, from among multiple languages, a language to be used for performing text-to-speech conversion.

In some embodiments, the text to be converted to speech is analyzed using one or more analysis criteria. Based upon the analysis, one or more languages may be determined as applicable for converting the text to speech. In some instances, the analysis may yield multiple languages as being applicable for the same portion of text. In this scenario, the multiple languages may be output to the user. The user may then select a particular language from the multiple languages. The portion of text is then converted to speech in the user­ selected language using a language synthesizer corresponding to the user-selected language.

This enables language synthesizers to be automatically switched during text-to-speech conversion to facilitate conversion of the text to speech.

In some embodiments, the text-to-speech conversion may be provided as a web­ based or cloud service or under a Software as a Service (SaaS) model. 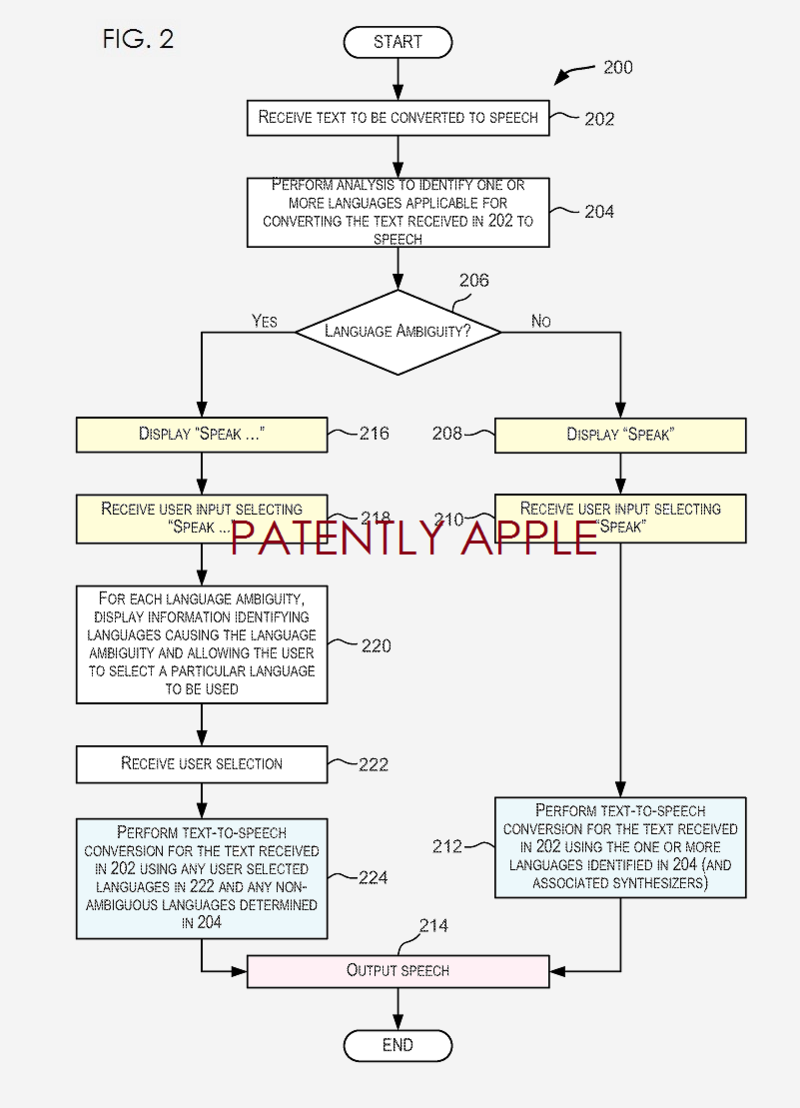 Below you'll note that one of the menu options in Apple's "Notes" app is "Speak." This isn't a standard option and you wouldn't even know that this option exists unless you bothered to read about it somewhere on an Accessibility webpage that most don't read.

Apple should offer this menu option as standard to give users the option to use it or not. When tapping on the "Speak" Option Apple could use a pop-up menu asking if users want to turn on this option and provide a walk though. That's not complicated. Being that Apple doesn't provide that option, we walk you through the process to have the "Speak" menu option available to you in the future. 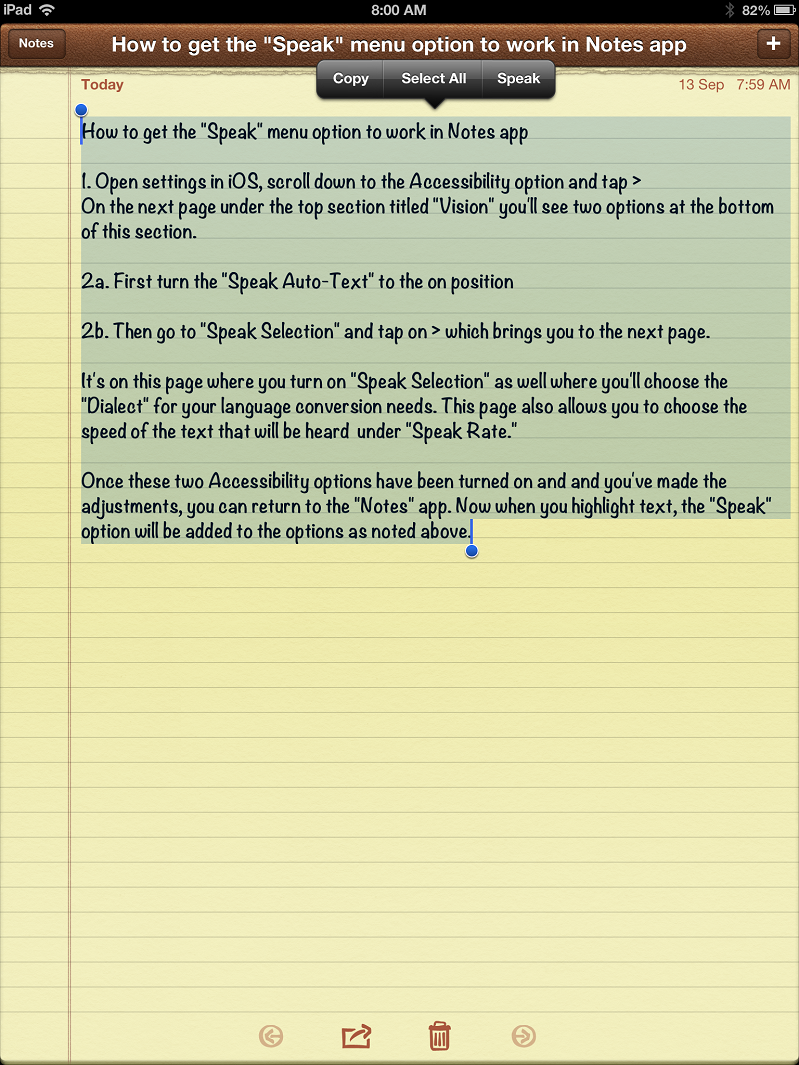 Apple's patent figure FIG. 5 below illustrates a paragraph in English with the conversion made to a Chinese dialect. It would appear that it's something like Google's Translation app. I happen to use that app every day and having such an app on my iPad would be great. Whether this is an angle Apple is thinking of for Notes in the future is unknown at this time, but the patent figure is strongly suggesting a text-to-text option. A feature that's unavailable today. 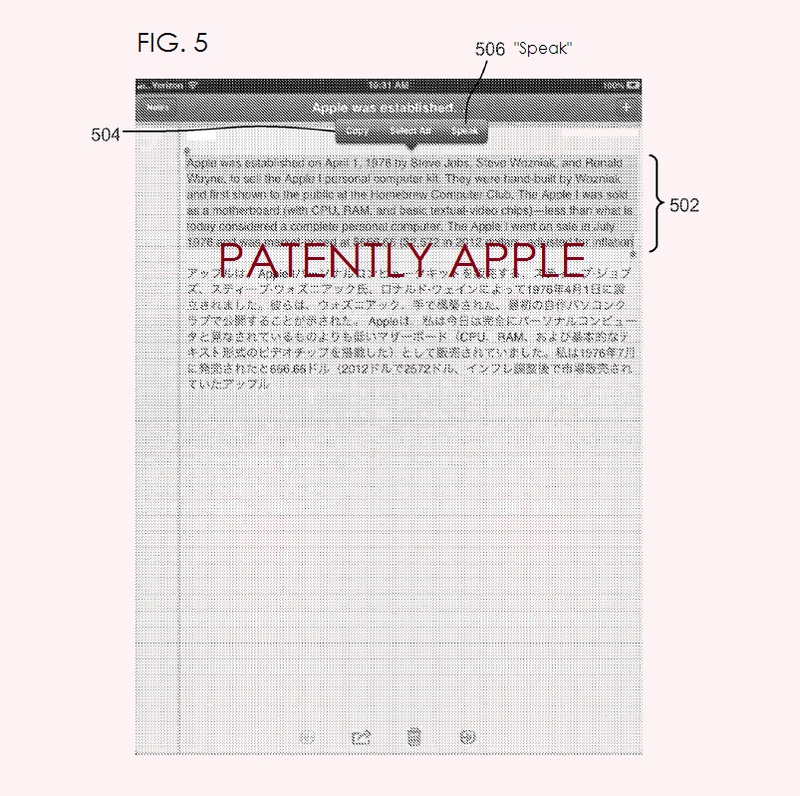 Thank you for your comment Markus. Yet I've always skipped over this section because I'm not disabled.

Apple are known for their stellar accessibility features. They've even given examples of this feature in TV ads featuring Stevie Wonder.No one with appreciation of thoroughness would skip over the accessibility section in settings.