PanTaurus has filed a formal complaint with the court alleging that Apple has infringed upon patent number 6,272,533 titled "Secure Computer System And Method Of Providing Secure Access To A Computer System Including A Stand Alone Switch Operable To Inhibit Data Corruption On A Storage Device." PanTaurus claims that Apple has infringed upon at least patent claim number 29 of this patent.

Deeper into the formal complaint PanTaurus points out that "Prior to service of this action, Apple had knowledge of the '533 Patent or was willfully blind to the '533 Patent. Knowledge or willful blindness can be inferred from the fact that the '533 Patent is a prominent, pioneering patent in the field of computer security. 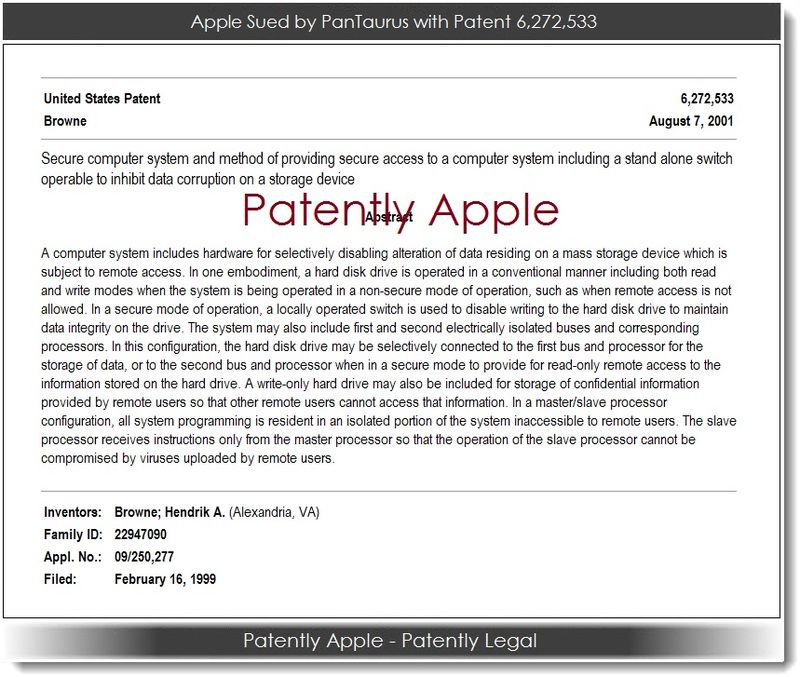 This is evidenced in part by the extent to which the '533 Patent has been forward-cited as prior art in connection with the examination of subsequently-issued U.S. patents. The '533 Patent has been forward-cited in approximately 60 subsequently-issued U.S. patents to date, including patents originally assigned to such prominent companies as Intel (18 times), Dot Hill Systems (13times), IBM, Nikon, Dell, Seagate, Lenovo, McAfee, Hewlett Packard, Lockheed Martin, and STMicroelectronics."

In Count 2, PanTaurus claims "Willful Infringement," which basically means that they're formally asking the court to triple the damages against Apple should they be found guilty based on their having prior knowledge of this patent and its contents and not settling with the Plaintiff prior to filing a patent infringement lawsuit with the court.

The patent infringement case presented in today's report was filed in the Texas Eastern District Court, Beaumont Office in Anderson County. At present, no Judge has been assigned to the case.

A 2011 study showed that Patent Trolls cost tech companies $29 Billion and a 2012 study made the case that patent trolling was out of control. To date, Apple remains the #1 Target of Patent Trolls. A simple Google search shows that PanTaurus appears to sue others for a living.