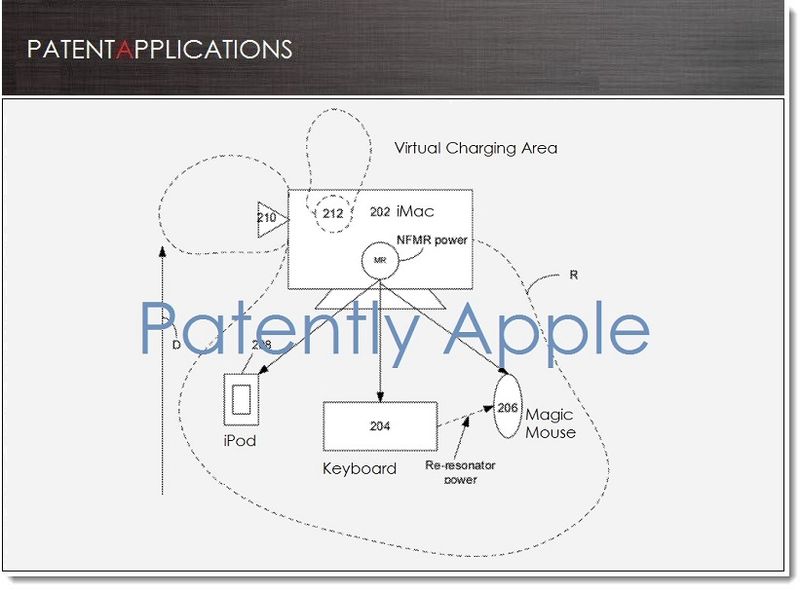 On September 19, 2013, the US Patent & Trademark Office published a patent application from Apple that reveals master details of their proposed wireless charging system. Apple's first patent application on this future wireless system was revealed in November 2012. In Apple's latest patent filing, their engineering team goes into more detail covering such things as the wireless power source, the wireless power delivery system and how the system will power nearby peripherals and more. The patent also hints that future peripherals may include an authentication module. Whether that means that Apple's Touch ID will extend to other peripherals in the future is unknown at this time. Generally speaking, Apple's inventions from scratch to finish take time to come to market. Yet with the release of their sexy new Mac Pro and maybe an iMac upgrade this fall, introducing an advanced wireless system to go along with it would be wildly applauded. Keep in mind that the latter is just a thought and not a rumor – but damn that would be nice.

Energy or power may be transferred wirelessly using a variety of known radiative, or far-field, and non-radiative, or near-field, techniques. For example, radiative wireless information transfer using low-directionality antennas, such as those used in radio and cellular communications systems and home computer networks, may be considered wireless energy transfer. However, this type of radiative transfer is very inefficient because only a tiny portion of the supplied or radiated power, namely, that portion in the direction of, and overlapping with, the receiver is picked up. The vast majority of the power is radiated away in all the other directions and lost in free space. Such inefficient power transfer may be acceptable for data transmission, but is not practical for transferring useful amounts of electrical energy for the purpose of doing work, such as for charging electrical devices.

One way to improve the transfer efficiency of some radiative energy transfer schemes is to use directional antennas to confine and preferentially direct the radiated energy towards a receiver. However, these directed radiation schemes may require an uninterruptible line-of-sight and potentially complicated tracking and steering mechanisms in the case of mobile transmitters and/or receivers. In addition, such schemes may pose hazards to objects or people that cross or intersect the beam when modest to high amounts of power are being transmitted. A known non-radiative, or near-field, wireless energy transfer scheme, often referred to as either induction or traditional induction, does not (intentionally) radiate power, but uses an oscillating current passing through a primary coil, to generate an oscillating magnetic near-field that induces currents in a near-by receiving or secondary coil. Traditional induction schemes have demonstrated the transmission of modest to large amounts of power, however only over very short distances, and with very small offset tolerances between the primary power supply unit and the secondary receiver unit. Electric transformers and proximity chargers are examples of devices that utilize this known short range, near-field energy transfer scheme.

What is desired are methods, systems, and apparatus for efficient and user friendly interaction between peripheral devices in a wirelessly powered local computing environment.

Apple's patent relates to a system, method, and apparatus for wirelessly providing power from a wireless power supply to any of a plurality of peripheral devices.

Generally the patent relates to techniques and apparatus for providing useful amounts of power wirelessly to devices within a wireless charging environment. In one embodiment, the wireless charging environment can include various computing devices along the lines of a desktop computer, a laptop computer, net book computer, tablet computer, etc. In some cases, a wireless power supply will be able to be used to provide power wirelessly to various electronic devices such as and iPhone that includes a portable power supply for mobile operation. 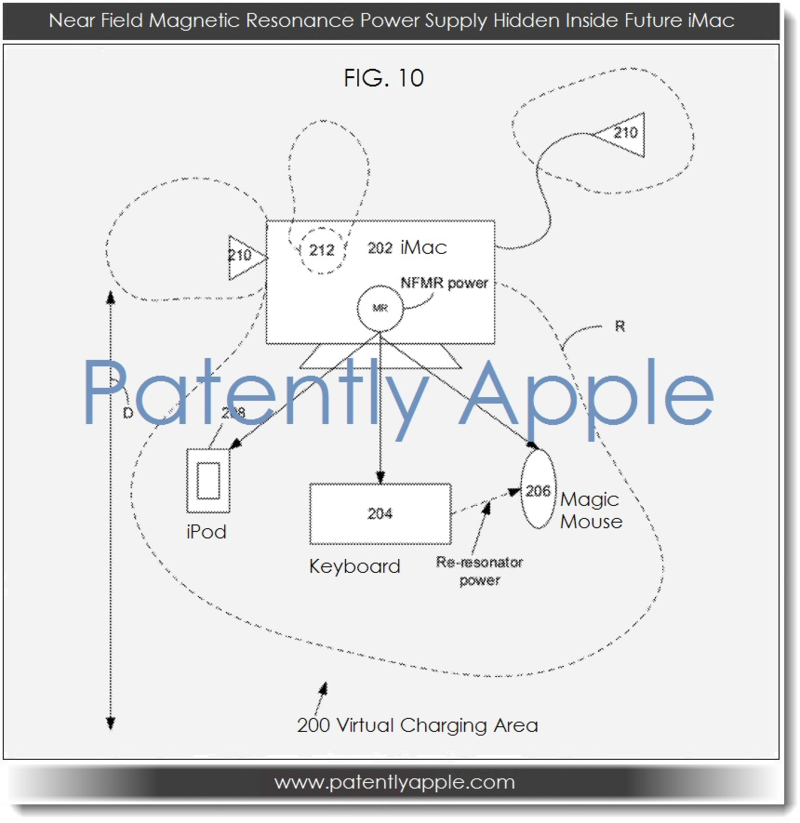 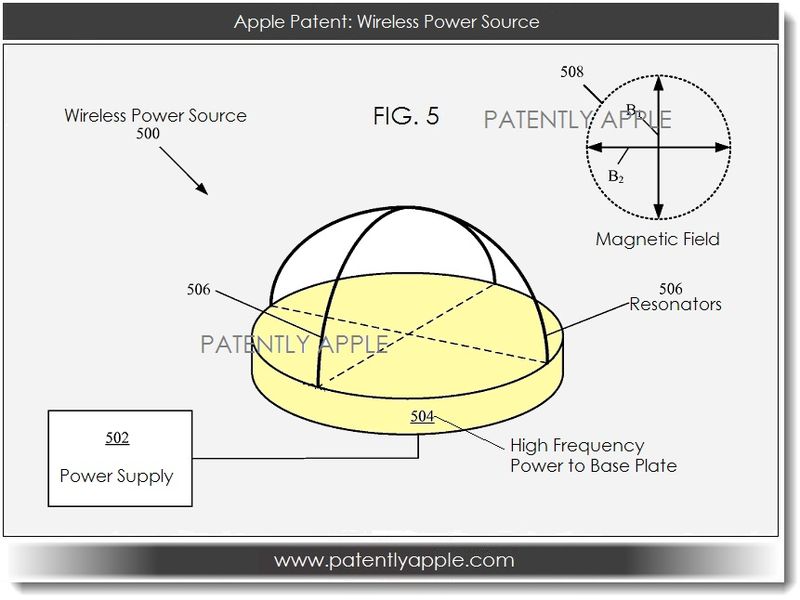 In yet another aspect, the resonant frequency of the NFMR power supply is dynamically tunable to any frequency by at least changing a shape of at least one resonator of the NFRM using, for example, a piezoelectric shaping technique. 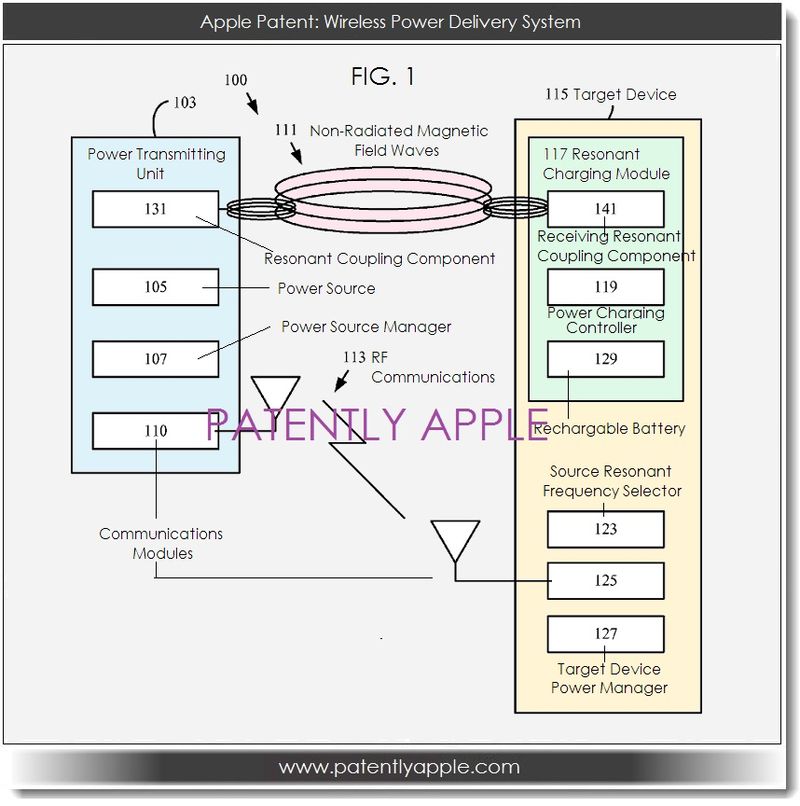 The power delivery system is used to deliver electric power to one or more target devices, and the target devices use the delivered power for operation or for recharging a battery or both.

Interestingly Apple notes that the system includes an "authorization module," but never explains that aspect of the invention. Is this simply an internal component or is it a part of Apple's Touch ID? The authorization module is noted as being related to the target device such a peripheral. Will future peripherals incorporate Touch ID as well? It's something to watch for in the future.

Forming a Resonant Channel between Wireless Power Supply and Peripherals 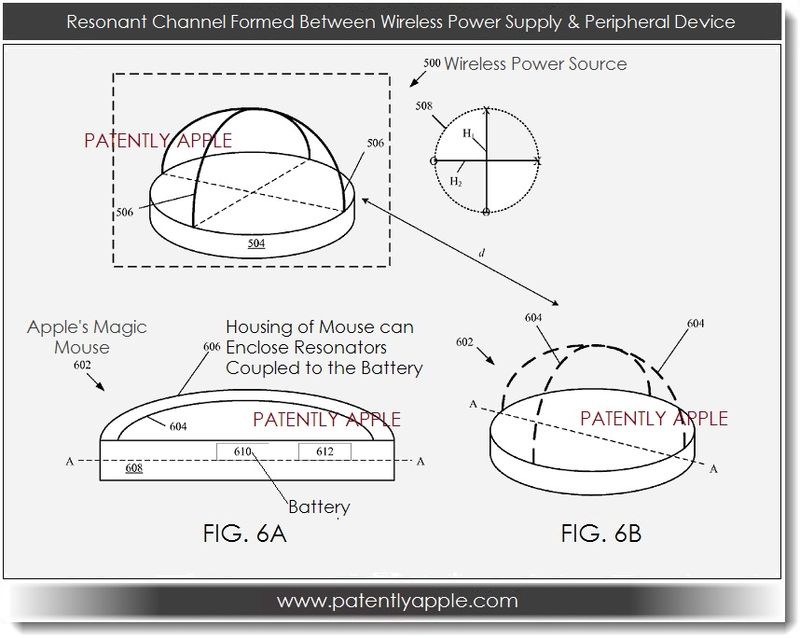 In Apple's patent FIG. 6B we're able to see a cross section of Apple Magic Mouse and Apple states that its housing can enclose resonators electrically coupled to battery and operational components. In this way, the battery and operational components can receive a relatively constant supply of power from the wireless power supply by way of resonators (#604).

It should be noted that in some embodiments, a battery isn't necessary as power can be received wirelessly from the wireless power supply thereby obviating the need for any on-board power supply.

On a last note, Apple states that in some cases, the ability of a desktop computer to provide power directly to the Magic Mouse can be reduced due to any number of factors such as interference from other devices. In this case, Apple's keyboard will be able to act as a re-resonator such that a portion of the power delivered to keyboard from the NFMR power supply can be passed on by way of a re-resonator transmission unit (not shown) in the keyboard 1004. In this way, any power loss experienced by the Magic Mouse can be ameliorated by the power received from the keyboard.

Apple credits Brett Bilbrey, Michael Culbert, Peter Arnold, David Simon, Mushtaq and Richard DeVaul as the inventors of patent application 20130241308 which was filed in May 2013 with references dating back to November 2011. There's a lot of detail to Apple's invention and for those wanting to dig into the finer details could so by checking out Apple's patent Application.

Posted by Jack Purcher on September 19, 2013 at 07:02 AM in 1A. Patent Applications, Wireless Charging, Wireless technology | Permalink | Comments (1)

Interesting stuff, though I laugh at Wired who can't tell the difference between a rumor and a patent. It's apples vs. skyscrapers. I guess their writing staff should go back to school.