Apple Replaces Coca-Cola as the World's #1 Brand for 2013 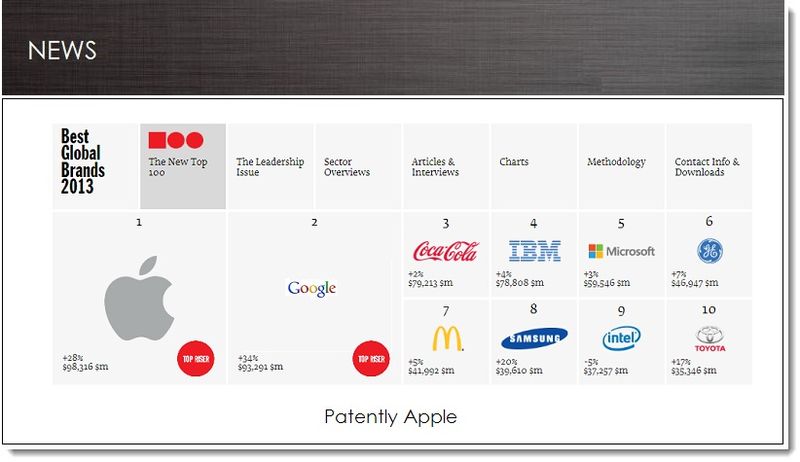 Every so often, a company changes our lives, not just with its products, but also with its ethos. This is why, following Coca-Cola's 13-year run at the top of Best Global Brands, Interbrand has a new #1—Apple. Few brands have enabled so many people to do so much so easily, which is why Apple has legions of adoring fans, as evidenced by the record-breaking launch of the iPhone 5c/5s. For revolutionizing the way we work, play, and communicate—and for mastering the ability to surprise and delight—Apple has set a high bar for aesthetics, simplicity, and ease of use that all other tech brands are now expected to match, and that Apple itself is expected to continually exceed.


From Interbrand's perspective, Apple's internal brand strength has remained steady. CEO Tim Cook has assembled a solid team that is aligned around the Apple vision, which has allowed them to deliver against the promise time and time again. There's been a lot of change at the top in the last 12 months, but the alignment of both hardware and software design under Jonathan Ive is a major step toward maintaining focus. A shrewd move, perhaps, given the stiffer than ever competition over the last 12 months: Samsung is now the world's most profitable smartphone manufacturer, Google has expanded Android and its maps still seem to be the "preferred" route, and Windows Phone 8 certainly raised more than a few eyebrows. 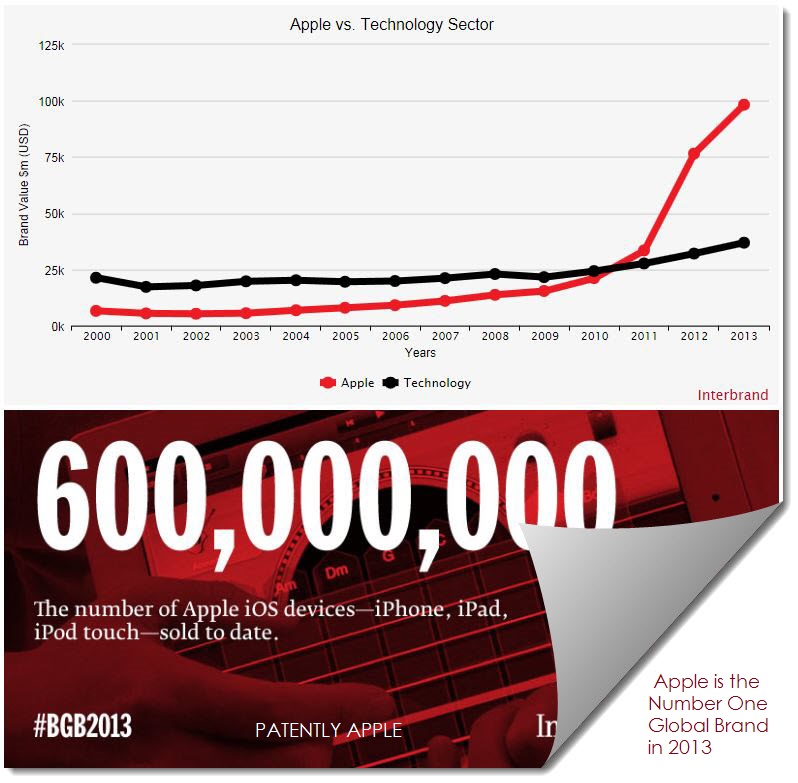 Today, there are 72 million Macs in use, and in the last five years, Mac sales have grown an average of 15 percent annually, compared to an average of three percent a year for the PC market as a whole. The iTunes App Store, which turned five this year, has crossed the 50 billion app download mark and the brand's trendsetting retail stores (according to RetailSails research) are performing 17 times better than any other physical retail store—a fact that seems to justify the trademark Apple received for its distinctive design and layout earlier this year.

Living up to the brand's iconic "Think Different" campaign, Apple's designers and engineers reimagined the operating system that powers the iPhone, iPad, and iPod touch. Incorporating a more sophisticated tool to help protect users' data and discourage theft, iOS 7's innovative new features include an activation lock, which prevents a stolen phone from being reactivated, even if a device is wiped.

Interbrand states that speculation is rife about a possible iWatch, with Cook recently hiring former Yves Saint Laurent CEO Paul Deneve to head up special projects along with Nike design director Ben Shaffer. But the real breakthrough (as if responding to those who questioned the company's ability to keep innovating) could be an upcoming smaller, mightier incarnation of the Mac Pro. Leaving the traditional tower behind, the Mac Pro's new tower is radically different: a cylinder-shaped design, built around a thermal core that is just one-eighth the volume of the previous machine while offering double the computing power.

Interbrand further states that the focus for the future is clear: Apple must succeed in slowing Samsung's momentum and capture the booming Chinese mobile market. Whether or not the brand can accomplish this remains to be seen, but one thing is certain: The world is waiting for the next iteration of Steve Jobs' classic "one more thing" announcement, and clear proof of his declaration that the brand's "brightest and most innovative days are ahead of it."

Whether that innovation turns out to be the iWatch or something completely unexpected, it's Apple's ability to "think different"—truly different—and to deeply consider our needs that will keep it on, or near, the top for years to come.

To understand how Interbrand chooses the top 100 Global Brands, review their methodology.