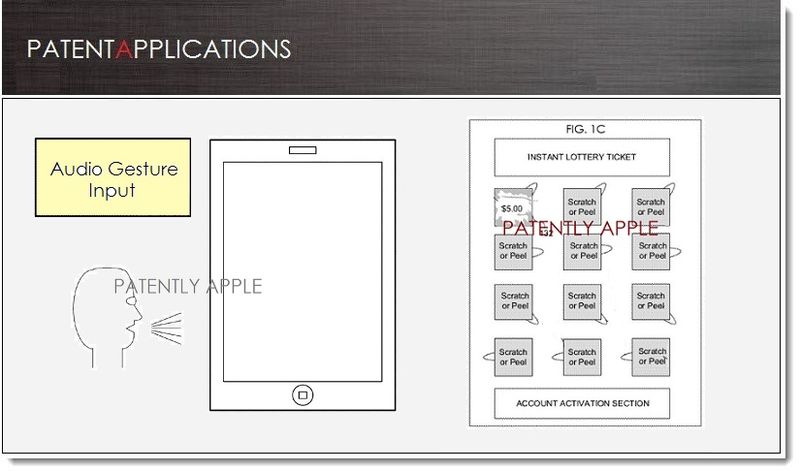 The US Patent and Trademark Office officially published a series of 41 newly granted patents for Apple Inc. today. In this particular report we cover three specific granted patents. The first relates to possible new iDevice & Mac authentication options. The second covers polarized flexible glass for future devices such as MacBooks and wearable computers. The third covers a superior manufacturing process that will deliver a stronger scratch-off material for promotional cards like gift or pre-paid phone cards and more. We conclude today's report with a full list of the granted patents issued to Apple for those who wish to do some treasure hunting.

Apple has been granted a patent today for their invention relating to accessing an iDevice or Mac, and, more particularly, to a method, apparatus, and system for controlling access to devices based upon varying inputs.

When it comes to the authentication process of unlocking our iDevices we currently use a numeric pad to set a combination code. In the not-too-distant future, Apple will be introducing a fingerprint sensor/scanner into iDevices. The technology will eventually make its way to the Mac via various methods such as the keyboard, trackpad or touch display. 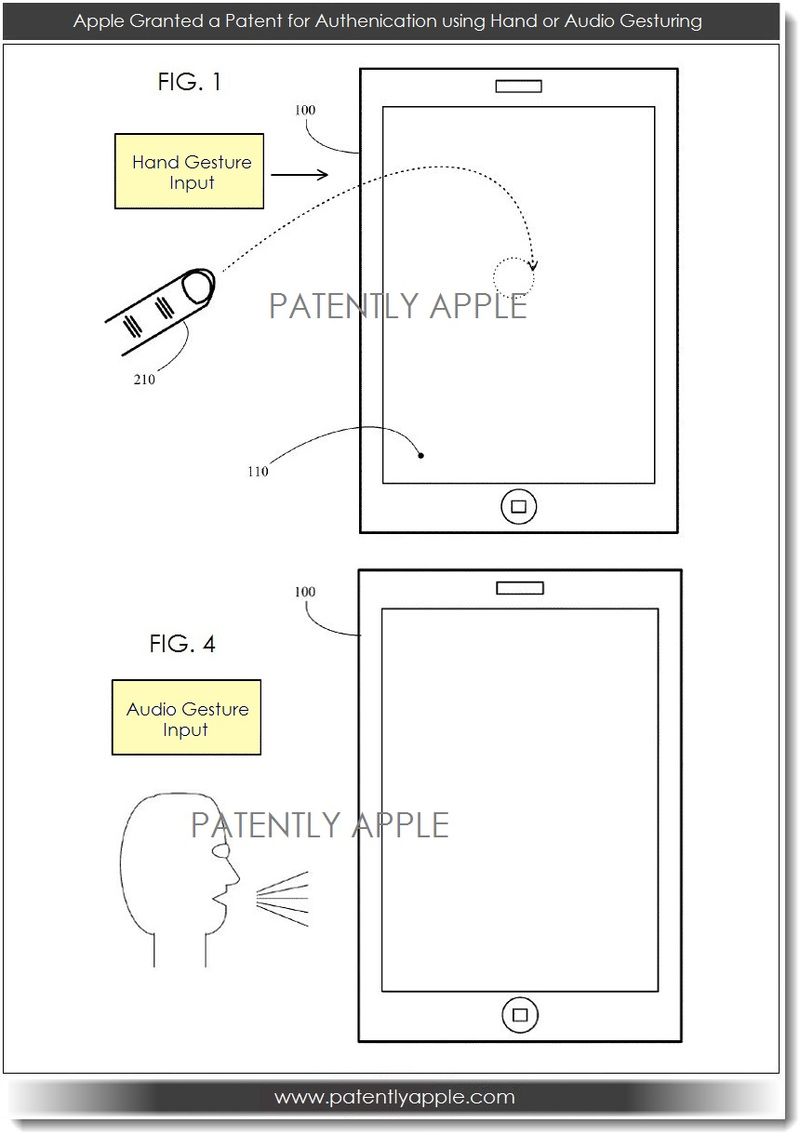 In Apple's patent FIG. 4 noted above we see a stylized depiction of a device receiving an audio gesture. A predetermined voice or sound may be recorded into the device. This voice recordation or sound may be used by the device when receiving a matching auditory signal, to provide access to one or more applications in the device.

In patent FIG. 7 noted below we see a block diagram depicting steps related to accessing a device. The device may receive access input data from a user. The access input data may include touch-screen gestures, voice gestures, audio input signals, keyboard/keypad and/or mouse inputs. 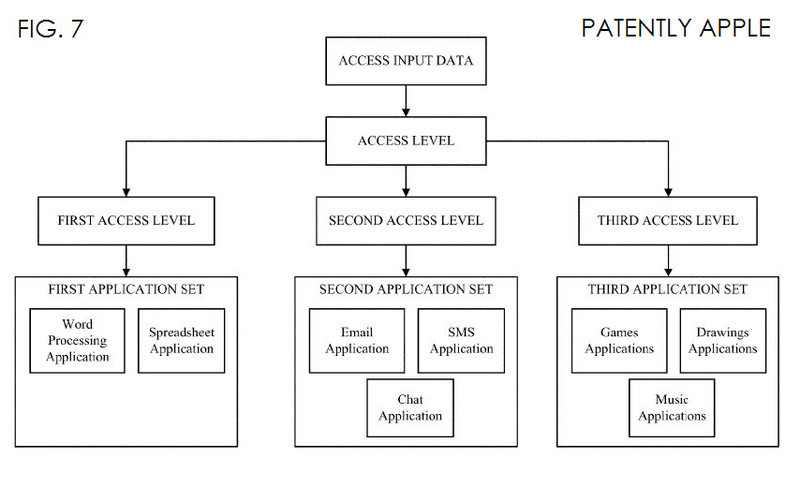 Apple credits Jianxiong Shi as the sole inventor of this granted patent which was originally filed in Q3 2010 and published today by the US Patent and Trademark Office. To review today's granted patent details and 24 patent claims, see Apple's patent.

Apple has been granted a patent today for their invention relating to optical polarizers and, more particularly, to polarizers in the displays of electronic devices. In general, polarizers cut down on the reflections on a display. Apple's display process may also allow for the inclusion of anti-static, anti-smudge and other properties.

A polarizer structure for a display may include a flexible glass layer, a polarizer layer such as a layer of polyvinyl alcohol doped with iodine, and one or more additional layers such as tri-acetyl cellulose layers and birefringent layers.

Coatings such as antireflection coatings, antistatic coating, and anti-smudge coatings may be provided on the polarizer structures.

Apple states that electronic devices that could use this invention includes a MacBook, iPhone , iPad, an iPod touch, wrist watch or other wearable or miniature device, a headphone device, earpiece device, or other electronic equipment. 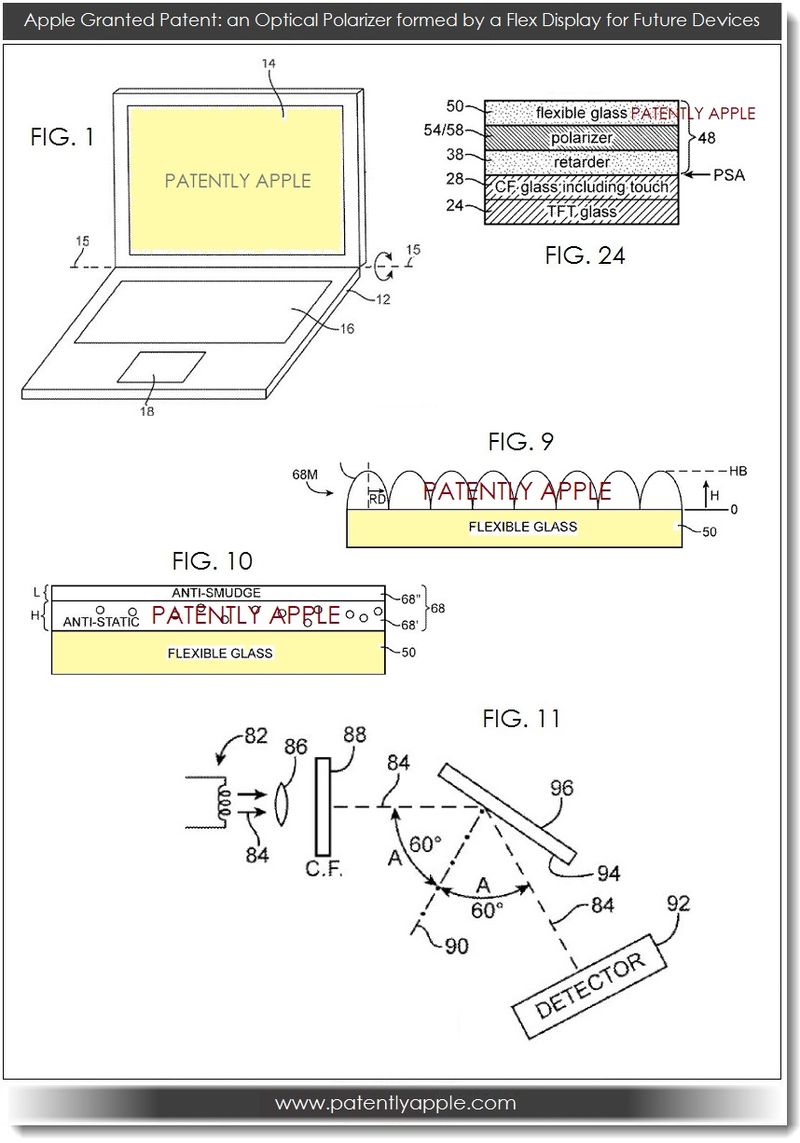 Apple credits Masato Kuwabara, Cheng Chen, Benjamin Rappoport, Ronald Lue and John Zhong as the inventors of granted patent 8,525,405 which was originally filed in Q1 2012. To review this patent and its 20 claims, see Apple's patent.

The last granted patent that we cover in our report relates to various types of cards (transaction, discount, pre-paid, gift) and coupons that will utilize a stronger dual scratch and peel label process so as to better conceal information on these types of products.

Apple states that the inconsistency in design of this kind of product and variation in user techniques of scratching off these peel-off areas can lead to user frustration, such as when a user accidentally scratches and/or removes the concealed information while attempting to merely remove the scratch-off surface. 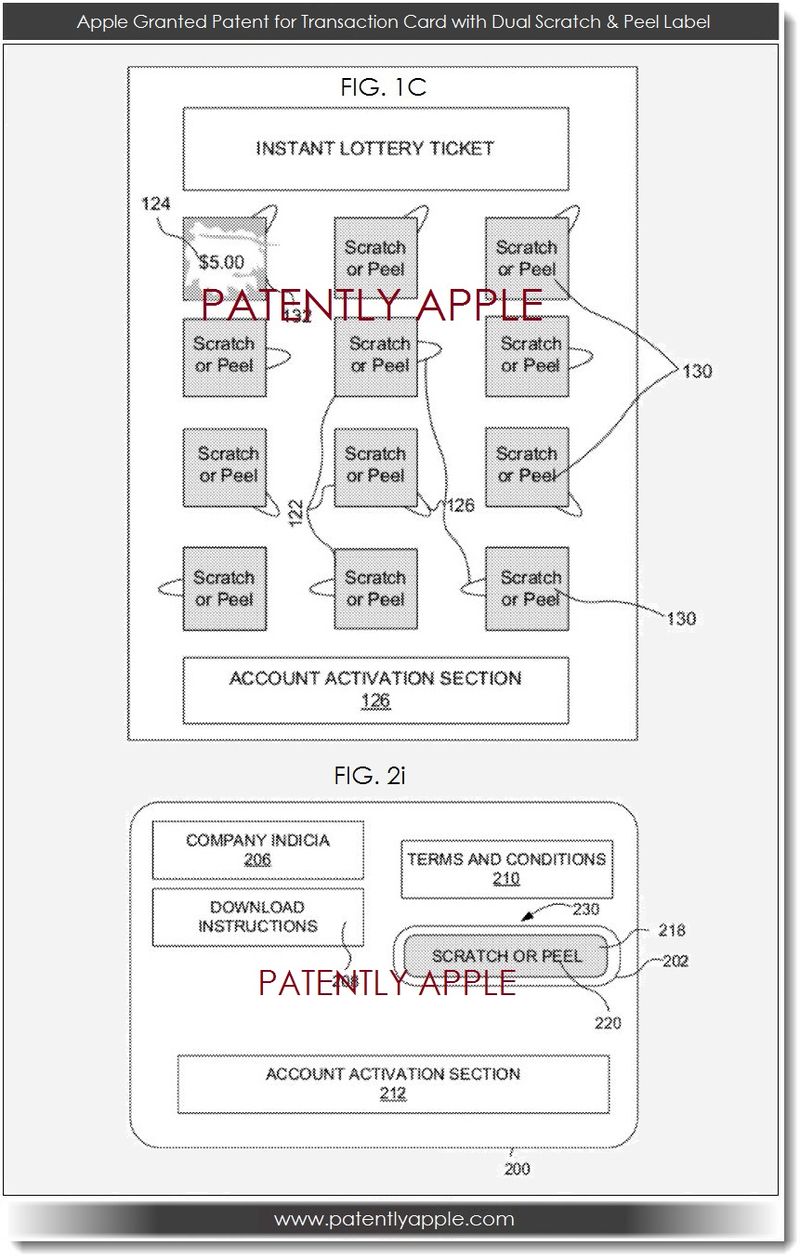 How Apple plans to introduce any such scratch-off cards in the future is unknown at this time. For those interested in reviewing Apple's patent on this dual scratch and peel label process could do so here. Apple's patent was originally filed in Q1 2011 by Ted Biskupski. 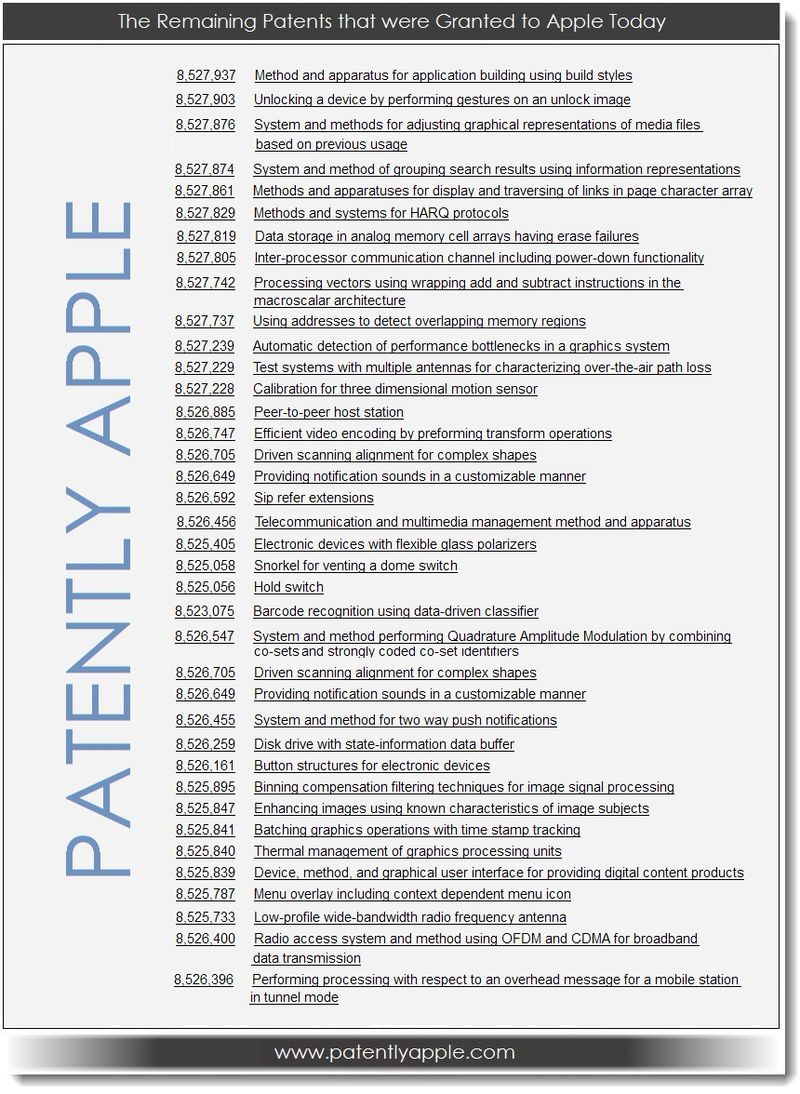