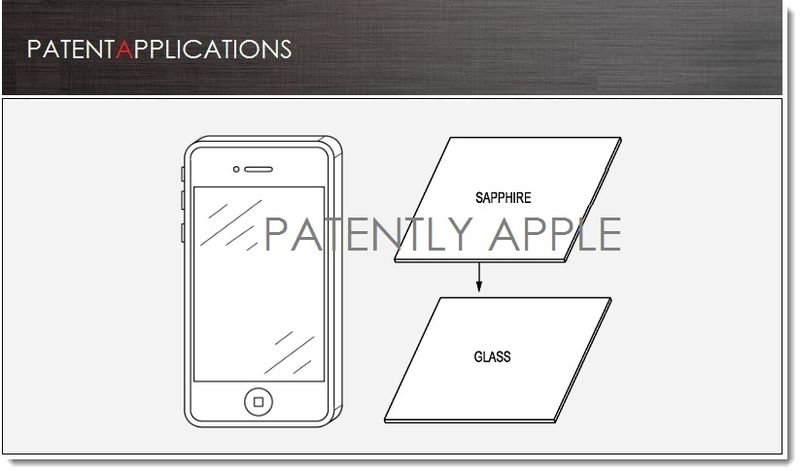 On September 12, 2013, the US Patent & Trademark Office published a patent application from Apple that reveals their intention to add a sapphire laminate to future iDevices like the iPhone and iWatch to provide a stronger glass that is ultimately scratch resistant. It was revealed earlier this week that Apple's new iPhone 5S Home Button is made from laser-cut sapphire crystal. Apple's patent application describes their method of fusing a sapphire laminate sheet to a device's cover glass.

As may be appreciated, due to certain characteristics of corundum, including its hardness and transparent characteristics, among others, it may be useful in a variety of different applications. However, the same characteristics that are beneficial for particular applications commonly increase both the cost and difficulty in processing and preparing the sapphire for those applications. As such, beyond costs associated with it being a precious stone, the costs of preparing the corundum for particular uses is often prohibitive. For example, the sapphire's hardness makes cutting and polishing the material both difficult and time consuming when using conventional processing techniques. Further, conventional processing tools such as cutters experience relatively rapid wear when used on corundum. Apple's new method also includes lapping and polishing a second side of the sapphire sheet and chemically strengthening the glass sheet.

Apple currently uses a sapphire finish on their iSight Cameras for iDevices and for the new iPhone 5S Home Button. Apple further notes that the use of a sapphire laminate may be used in future products including Macs, a watch or other mobile devices.

Apple credits Christopher Prest, Dale Memering, David Pakula, Richard Dinh and Vincent Yan as the inventors of this patent application which was originally filed in Q1 2013. To review Apple's new fusion process for producing a laminate sheet for use in glass structures, see Apple's patent application 20130236699.

Sometimes an invention/patent comes to life in quick order. However, many times it's a much longer process, Applefanboy. Is it something that Apple is working on, yes. The patent is proof of that. But will it be ready as soon as the Phone 6? No one knows the answer to that.

So next iPhone is going to have extra hard screens then??