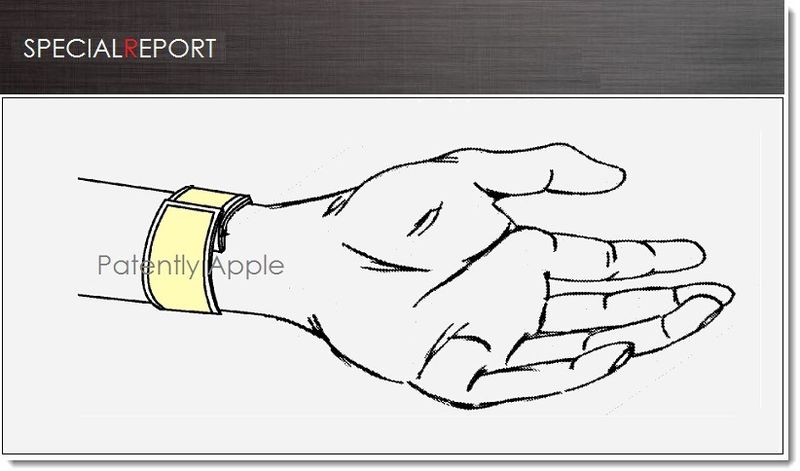 Two weeks ago 9to5Mac reported that Apple had recently hired several scientists and executives from multiple sensor developers such as AccuVein, C8 MediSensors and Senseonics. The report speculates that Apple has interest in sensors that could measure glucose and other body information that could be a part of a fitness application. An Application that could very possibly be associated with a future wearable computer device like the one Apple recently filed a patent for. New technology has recently come to light in Japan that could be of benefit to Apple's project and we'll show you how.


Apple's wearable computer patent prominently noted that it could use an AMOLED flexible display for its ability to be shaped into a product for the wrist and its power saving nature. Then in a patent application published this week we see that although Tim Cook has downplayed OLED in its current form, Apple is working on improving the color and brightness of this kind of display.

So as Apple looks towards the wearable computer market, OLED display technology could take on a more important role. In fact that's likely why Apple hired a Dr. Lee Jeung-jil, a former senior researcher at LG Display back in February.

A new development revealed in a Japanese publication recently has shown that a research group has developed a sheet-like OLED light source that functions even when being crumpled.

For collecting biological information such as the amount of oxygen in the blood, heart rate and blood pressure the devices can be made by combining a light source and light-sensitive detector. Therefore, the research group expects that the new OLED light source will be used for medical and healthcare wearable devices that use light as a probe to collect a variety of biological information.

The technology could also be attached directly to the skin which is akin to a technology we covered back in June in context with device authentication. Whether a wearable computer's display would have to be double sided in parts close to the wrist in order to contact the skin directly to obtain biological data or whether the wrist device would work in conjunction with add-on medical strips sold by Apple is unknown at this time.

The new breakthrough OLED design or one similar to it is exactly what Apple needs to push their project into reality a little quicker. With the right team of scientists, like the ones that Apple has recently hired, Apple's wearable computer device has a higher chance of integrating a higher range of health related applications to make the device a success.

To kick start the WWDC 2013 keynote, Apple played a unique video that emphasized that designing something original takes focus and time. The pieces of the wearable computer puzzle are coming together and a new OLED technology breakthrough as reported on today may one day play a role in a future Apple product.

My appreciation for apple. I am a great fan of apples products.