According a new Korean report, the Wireless Business Division of Samsung Electronics decided on August 29 to build a line for producing metal cases, e.g. magnesium and aluminum, in Gumi plant by the end of this year.

The report states that Samsung is trying to reinforce a premium brand image by enhancing the design competitiveness. At present, their plastic casing gives the Galaxy smartphone line-up a very cheap consumer experience in contrast to Apple's classy glass finish for the iPhone 5.

As Samsung Electronics shifts their focus of the exterior materials for their smartphones from plastic injection molded cases to metal cases, they expect the supply chain to experience a huge upheaval.

According to the report, "The purpose of this move is to apply metal cases to their premium smartphone models to be released early next year. The report added that "only Apple has used metal cases. The late Steve Jobs, Apple founder, insisted on metal to emphasize the futuristic feeling of the iPhone and iPad series." 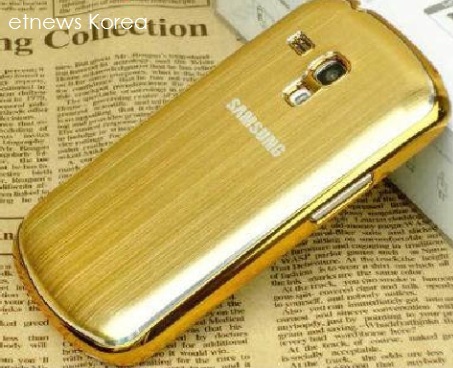 Once again Samsung's obsession with Apple's every move is exposed and goes to support the fact that Samsung remains a fast follower.

The Korean report used a stock photo of an exterior metal case rather than what Samsung will actually deliver simply to convey the gold color.

At the end of the day we'll see how this all plays out in 2014. Yet the indication is that a 2014 Galaxy smartphone will be available with a metal casing available in gold along with other colors. Hmm, I wonder what made them think of gold?

If Samsung wanted to kill opponent/opponents, Samsung should innovate or pull out a hats instead of keep copying. Samsung has been called copycat which is very humiliated. However, Samsung lacked of innovation, whatever Apple is doing, Samsung just copied thereafter with little or no changes at all.

So Odo, pretend Samsung was able to destroy Apple. Who do they copy then? Seriously. Fortunately there will always be a percentage of the market that will choose Apple products. I've lived in Korea and observed this blatant rip off trial and error system first hand. It's cultural man. Their product is a symbol of the culture. As long as Apple is around Samsung will continue to copy them. They can't help it, it's cultural.

If you go to the original article, the metal case for the iPhone is in context with using the metal band, as they refer to the problem Apple had with the "death grip."

Maybe Samsung could try to crush their enemies by actually innovating instead of copying (sorry fast following).

Maybe then I would actually respect them.

Plagiarism is just sad and embarrassing.

"Only Apple has used metal cases."

Samsung will try to prove that anything Apple does, Samsung can do better. It will be really something if Samsung starts machining magnesium cases for their high-end smartphones. I only know magnesium is light, but there may be other drawbacks to use it that I'm unfamiliar with. It will be rather difficult for Apple to compete against a company like Samsung when it comes to pure hardware. Samsung will do anything, even if they lose money on it just to beat Apple at everything. Apple has been purchasing CNC milling machines for a few years to use in the manufacturing of both notebook and iOS devices, so the cost is spread out over their entire mobile lineup. Samsung is going to have to change course. CNC milling is time intensive, so Samsung isn't going to be able to spit out milled casings like they do with their present model smartphones.

If this rumor is true, I have to give Samsung some respect for going all out to beat Apple. Samsung's aggressive methods have certainly killed a lot of companies they've competed against. Samsung doesn't stop until their rivals are destroyed. Samsung can do anything it wants and will happily clone rival's products to beat them.

So sad. I hate those guys