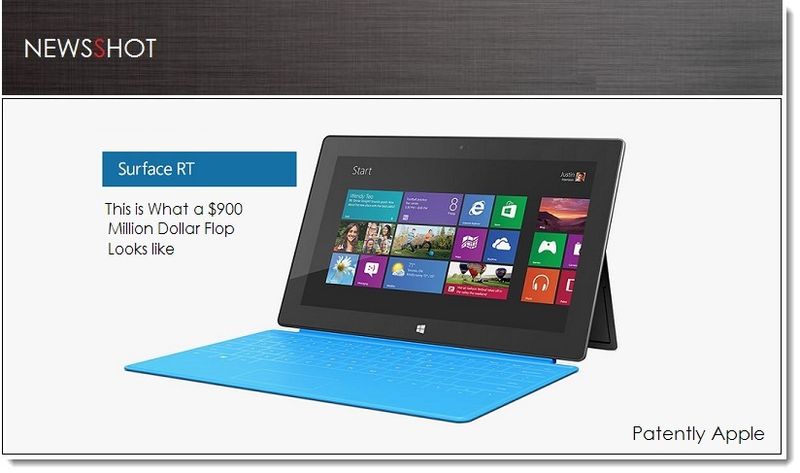 Yes, it was a huge miss. Microsoft's earnings per share expectations were $0.75 but came in at a painful $0.59 yesterday. While the shortfall was in-part due to the decline in their general PC business, the real kicker was the news about their new Surface Tablet. Report Update 9:30 AM MST


In their press release, Microsoft says it's taking a $900 million charge, or a $0.07 per share impact, due to the Surface RT inventory adjustments. Well, if that's not a creative way of saying that their Surface RT is a complete and utter failure. What did they expect when they screwed their traditional hardware partners?

I guess creating a successful iPad killer is a little more complicated than they first thought. Back to the drawing board you go, boys. And by the way, try spending a little more time actually innovating something rather than throwing your money out the "Window(s)" on ads pretending that your tablet actually matters.

In October 2011 we posted a report trying to give Microsoft a little credit for trying to resurrect from the ashes. We covered their developer conference that was introducing Windows 8, a hybrid OS marrying a traditional desktop with a new mobile UI once dubbed the "Metro" UI. Our report's cover graphic illustrated that this hybrid OS was certainly a gamble that could go either way. The graphic was titled: Windows 8: Winner or Loser? In our follow-up report in April of this year, it was clear that the public wasn't buying into the radical Metro UI and Windows 8 drove PC sales down to a disastrous level that was deemed the worst in over 20 years.

So the news today is the shoe on the other foot. It's not about Windows 8 for PC's being disastrous; it's about their Metro UI based Surface Tablet being the disaster du jour. So to answer the question that we posed in our graphic: Windows 8 is a loser any way you look at it.

While Microsoft is trying to regroup, as of this moment, it's just a living nightmare that never ends. Some in Mac community may even think of it as Karma. If you have any thoughts on this, send in your comments.

Microsoft's stock (MSFT) is likely to close below $31.50/share today which will represent an 11.5 % decline on the news. According to Reuters, it marks the biggest sell-off of Microsoft stock since 2000.

$900 million is just the accounting charge related to lowering price of RT tablets in inventory from $500 to $350. The math works out to 6 million RT tablets.

Saying that something is a flop because they lower the price is fine. But saying that it's only a flop in the amount that the price has come down seems to underestimate the issue. What if they never sell those RT tablets despite lowering the price by 30%?

I don't know how long tablet useful lives are, but October 2012 was many months away, so it's probably time for potential buyers to wait for Surface 2.

Side note, do you know why they call it the Surface? Because it's a great surface to put your ipad on.