IDC: Q2 PC Stats Rank Apple as the Number 3 Vendor in US

A new report just in from IDC states that Worldwide PC shipments totaled 75.6 million units in the second quarter of 2013 (2Q13), down -11.4% compared to the same quarter in 2012 but slightly better than expected. Apple's US sales were steady.


The new IDC reports noted that total shipments were effectively right on forecasts of 75.4 million and growth of -11.7%, although Europe, Middle East, and Africa and Asia/Pacific (excluding Japan) were a few points below expectations with the difference made up in the United States. 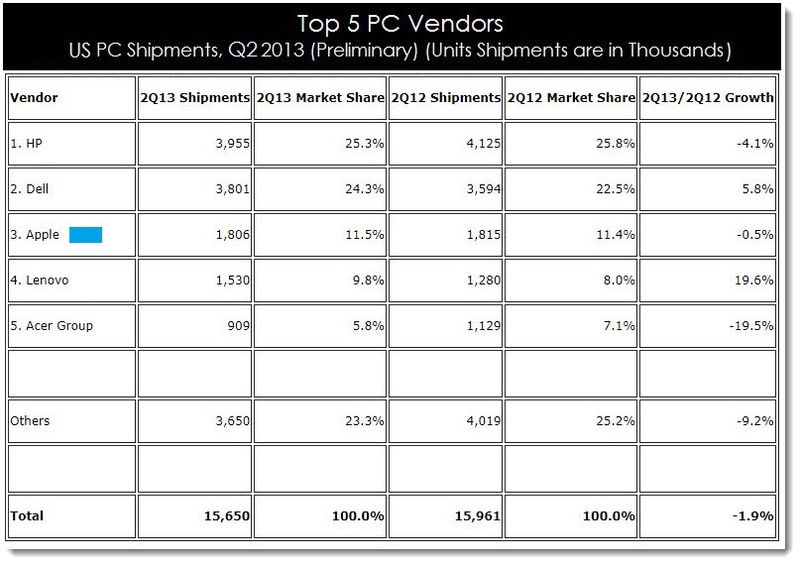 The numbers reflect a market that is still struggling with the transition to touch-based systems running Windows 8 as well as justifying ultrabook prices in the face of economic pressures and competition from tablets and other devices.

Jay Chou, Senior Analyst, IDC Worldwide PC Tracker stated that "With second quarter growth so close to forecast, we are still looking for some improvement in growth during the second half of the year. Slower growth in Europe and China reflect the risks, while the improved U.S. outlook reflects potential improvement. Still, the weakness in emerging markets is a threat to a core long-term growth area. In addition, while efforts by the PC ecosystem to bring down price points and embrace touch computing should make PCs more attractive, a lot still needs to be done in launching attractive products and addressing competition from devices like tablets."

One positive sign is that HP and Dell saw growth improve over recent quarters, possibly indicating stronger performance in coming quarters and reflecting more commercial replacements as we get closer to the end of Windows XP support.

The end result should be more PC replacements, even if consumers and companies are selective in making replacements and wait until PCs are older before replacing them.

Apple took third spot at 11.5% Market Share which is roughly the same market position it held in 2012. IDC shows that Apple didn't make the top 5 worldwide and didn't provide any guidance as to where they may have ranked. Apple's US sales stats were impressive coming in at as the third best. Lenovo showed a 19.6% increase year over year and Dell with a 5.8% gain in the same time frame. The biggest loser of the quarter was Acer at -19.5%.

It was reported last quarter that it was the worse in 20 years for PCs. Yet looking forward, a Gartner report stated earlier in the month that tablets were also in store for some rocky times ahead.