Copycats just can't help themselves. It's an addiction to want to be so much like their competitor that they'll do anything to blur the lines between their competing products. They'll resort to ripping off their competitors whenever possible and/or just repeat the lie loud enough that they're the inventor of something - just to give the public the distinct impression that it's actually theirs. Recently Google has tried to mimic the MacBook Pro with Retina to blur the lines and now they're thinking of adding presence technology to their Chromebook Pixel. The problem is that they just ripped off one of Apple's granted patent figures to an embarrassing point that you have to see for yourself. I appreciate Google for their efforts on Google Glass and other projects – but let's get real here. Sometimes copying is like getting a pie in your face. You just look stupid. Even Google could do better than that. 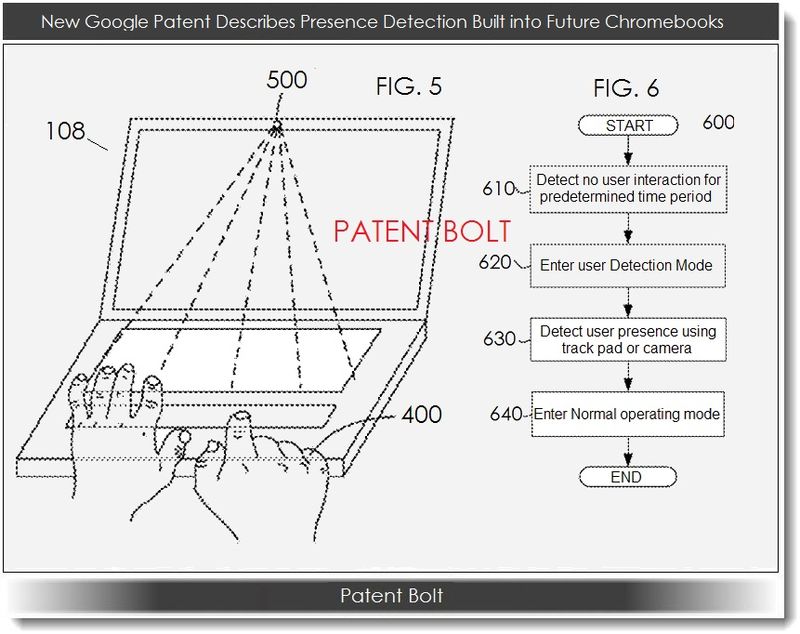 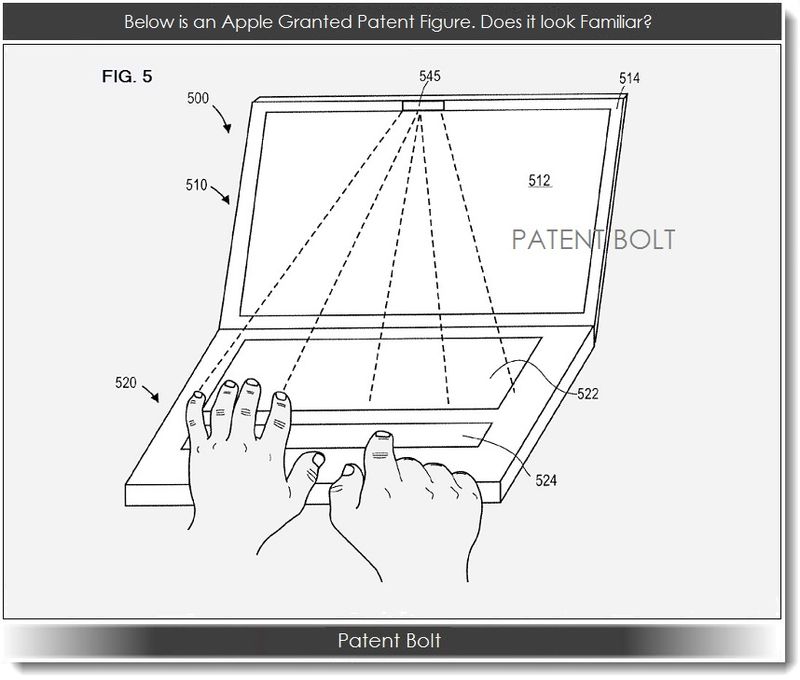 As you could see for yourself, the hand positioning in the Google patent figure is absolutely identical to Apple's granted patent figure. Also notice that the trackpad strip is also identical. The thing is that Google's other patent figures noted in their recent patent filing don't illustrate a wide strip trackpad which further proves that Google's team just ripped the graphic from Apple's patent. On the flipside, Apple's patent is in fact pertaining to a wide trackpad and for the same concept of presence detection as one of invention's functions.

Furthermore, the lines that illustrate the camera's area coverage are identical in placement as those found in the Apple patent. Other than there being a round hole representing the camera position in Google's patent, this has simply been lifted from Apple's granted patent 8,098,233.

At the end of the day, it's a little embarrassing to say the least that Google has had to resort to such blatant copying like their partner Samsung. Is it a corporate cultural thing or will someone's head roll for being this stupid? Only time will tell.

The one somewhat legitimate reason for this might be that Google hired the same patent drawing artist as Apple previously hired, and he or she is reusing components. But the notebook is not a stock piece. The wide trackpad is specifically from the Apple patent. So it would still be a mistake on the part of the artist and a bad news day for Google, but not as bad as otherwise. Of course, Google is the one who created their well-deserved reputation as a copyright thief.

> Most likely, the guys at Google looked for an existing graphic that was (a) not under copyright and
> (b) a pretty good visualization of what they were doing and used it. No harm, no foul.

All drawings are protected by copyright, unless the author has been dead for 75 years or the author has specifically given up their copyright and placed the drawing in the public domain. You have to have zero understanding of copyright to think otherwise. As soon as you fix an original work in a medium, it is copyright you. No notice or other legal process is required. Patents especially would be under copyright because the whole point of a patent filing is to reigister an original idea that has no prior art.

> Everyone copies each other. People create new things too. Right now you are
> reading and writing words that are words that other people have used -- you are
> copying them.

The idea that copying a complicated drawing like this is akin to using words is so absurd that if you said that to me in a place of business I would have to fire you. A) for the sheer stupidly of it. B) for the lack of integrity that is shown by a desperate attempt to excuse the inexcusable because you think Google has a right to copy everything and sell ads on it. Your comment actually makes the reader stupider.

> It should be mentioned that this is not illegal at all

That is absurd. Of course it is illegal to copy someone else's work and pass it off as your own. In every single case.

I needed a good laugh at lunch. Thanks. You Android heads are really funny people.

Everyone copies each other. People create new things too. Right now you are reading and writing words that are words that other people have used -- you are copying them.

What makes you say that the graphic was not under copyright? In the US, with very few exceptions all images have copyright protection from the moment they are created whether there is a copyright registration or not.

Why are Google engineers even looking at Apple's patents to begin with? Are they just looking at pretty pictures or ideas that they can "creatively borrow"? Apple's patent also covered a "presence" feature, so there was a little more than just borrowing/stealing a graphic.

Most likely, the guys at Google looked for an existing graphic that was (a) not under copyright and (b) a pretty good visualization of what they were doing and used it. No harm, no foul.

I'm sure they justify this as reuse.

so? it's symptomatic of a cultural problem within google.

I think that it's a brilliant idea, and I hope Google is granted a patent on it. Apple must be kicking themselves.

Maybe this is an act of rebellion on the part of the graphic designer who was asked to draw the figure for a patent application that was a copy of a patent granted to Apple.

We could hope that there'd be someone with integrity at Google who would pull this stunt.

I'm sure Apple could make a case of it if they wanted to challenge the patent itself. However, it's the blind copying that's the point for now. This isn't new for Google or Samsung. It just shows how closely they follow Apple patents for ideas.

Why do you people care about these billion dollar mega-corporations? Just buy Apple or just buy Google.

Not a fat chance in hell, lewisfrancis. Look at the Apple patent for context. That's what made this rip off so blatantly obvious.

It should be mentioned that this is not illegal at all and that the illustrations in a patent are there for functional reasons, not design reasons. They aren't intended to be visual descriptions as much as they are there to be symbolic indicators of the relationship between elements.

All that being said, it's just sloppy to do this and it shows a kind of disregard for anything but themselves.

[To Mister Grey. You're added comment about Twitter wasn't clear. If it was addressed to Patently Apple, let me say that I have no idea what Twitter does or doesn't do with comments to us. You'll have to ask Twitter and good luck with that. Cheers.]

Even when Google copies graphics they are not as smooth.

The bigger issue here is that the presence detection indicated by the Google patent is bleedin' obvious. I do hope this patent is not granted.

I'm sure their patent lawyers found the image with Google Image Search, and didn't check provenance. Hey, if it's on the Internet, it's not copyrighted or anything, right? ;-(