The Trustees of Boston University have filed a patent infringement lawsuit against Apple alleging that they're using a thin film semiconductor device found in such products as the iPhone 5, iPad and MacBook Air that was invented by the University.

The University is one of the largest private universities in the United States, and one of the largest employers in Boston (BU) with more than 10,000 faculty and staff and over 33,000students. It conducts a diverse range of interdisciplinary, collaborative and innovative research projects across a broad spectrum of academic departments, programs, centers and institutes, including research in the field of electrical and computer engineering. BU faculty members have won five Nobel Prizes and BU has been awarded hundreds of United States Patents, including U.S. Patent Number 5,686,738 (the "'738 patent").

According to the formal complaint filed by the Trustees of Boston University, Theodore D. Moustakas, Ph.D., Professor of Electrical and Computer Engineering at BU, is the named inventor of patent 5,686,738 titled "Highly Insulating Monocrystalline Gallium Nitride Thin Films."

The University owns by assignment the entire right, title, and interest in and to the '738 patent, including the sole right to sue for past and present patent infringements thereof. 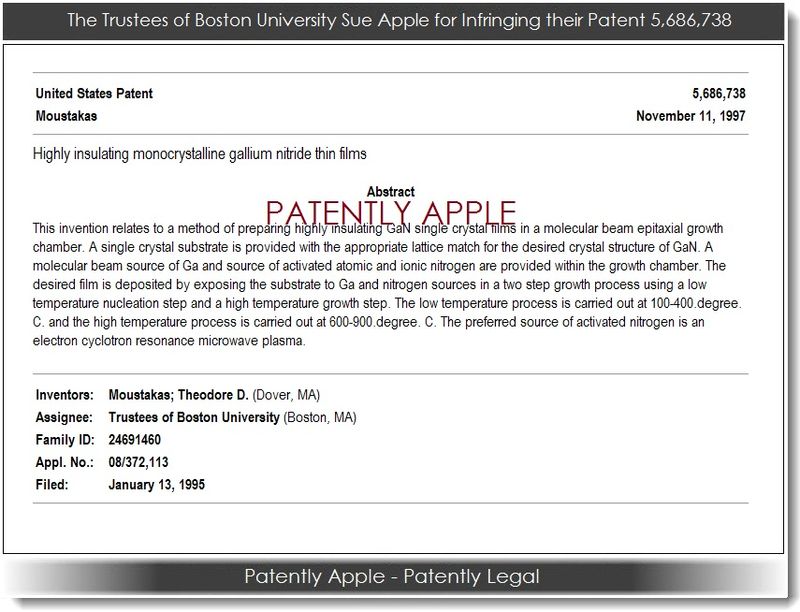 Several of Defendant's products, including the iPhone 5, iPad, and MacBook Air (collectively referred to as "Accused Products"), include a gallium nitride thin film semiconductor device claimed by the '738 patent and thus infringe one or more claims of the '738 patent.

The Trustees of Boston University demand a trial by jury.

The patent infringement case presented in today's report was filed in the Massachusetts District Court, Boston Office under case number 1:2013cv11575. The presiding judge is noted as being F. Dennis Saylor.

Somebody is trying to get just a little more coin on a patent expiring shortly.

The gallium nitride thin-film patent covers a way to fabricate a substrate for specialized components used in UHF/microwave radio circuitry as well as some white-light LEDs. Apple doesn't make these sorts of parts. They buy Bluetooth/WiFi chips and LEDs from vendors. The typical vendor contract has the vendor indemnify (insure) the purchaser (Apple) against intellectual property damages, so if a vendor is using the 5,686,738 patent technology in their product, they are ultimately on the hook for any unlicensed use.

Boston University is just going after the proverbial Deep Pockets.

Another patent troll- BU.
Left to BU, if valid, this patent would have gone un-noticed.
But now, that Apple's making $, BU decides it too must throw its hat into the trolling business.