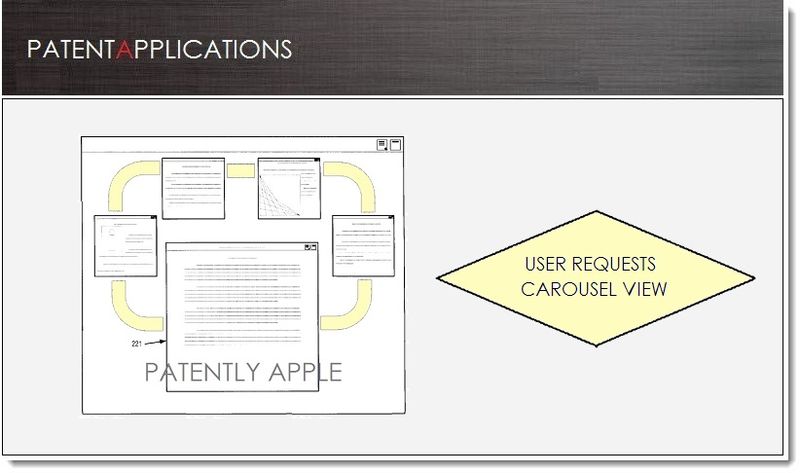 On July 25, 2013, the US Patent & Trademark Office published a patent application from Apple that reveals a new feature coming to Safari that advances the nature of tabbed browsing. When you have a sea of open tabs before you, it's difficult if not impossible to find that one tab that you want to access quickly. Apple introduces a new Carousel concept to advance tab browsing and eliminate that problem. Today's report concludes with the listing of a few other minor patent applications that were published today by USPTO that some of you might find interesting.

Today's trend in browsers involves accessing many web pages in parallel, rather than sequentially in a "tabbed browsing" experience that allow users to save multiple tabs of content. In this model, multiple web pages are all viewable within a single GUI window and viewable one page at a time.

Unfortunately, tabbed browsing continues to present drawbacks similar to those of the model upon which it sought to improve. Chiefly, a user still can't easily find a particular web page when they have many pages open concurrently. However, once the number of opened tabs reaches more that 5 or 6, tabbed browsing becomes just as cumbersome as its predecessor model without tabs.

As there is limited room for tabs, an interface presents a problem when more web pages are accessed than there is room to display tabs. One solution is to shrink the width of the tabs, which results in their titles being unreadable and leaving the user with no way to identify which tab corresponds to a particular web page for which they're searching.

An alternative methodology is to allow tabs to extend off-screen which is very much like today's iOS version of Safari which allows users to scroll through tabs that are off-screen. However, scrolling is not an ideal method of searching for a particular textual title. Indeed, tabbed browsing continues to present a model in which a user must identify a web page based solely on the title of that webpage, when titles often don't provide adequate distinctions between open pages.

Apple's inventive solution provides a method for graphically organizing and displaying multiple pages of internet content based on how the page was accessed. Pages are determined to be indirectly accessed if they were accessed via a hypertext link or a trail of hypertext links. 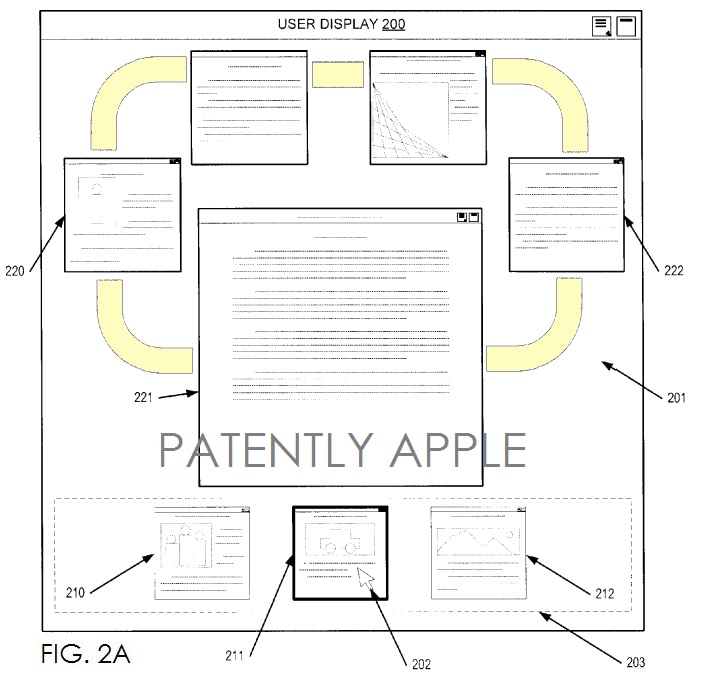 The interface illustrated above in patent FIG. 2A is simply one implementation of a display creating a visual representation of the page groupings. Alternate implementations can be employed to represent the same organization scheme. For example, the page groupings might be displayed in a horizontal or vertical film-strip style list of snapshots in the interface, as illustrated at the bottom of patent FIG. 2A.

Yet another implementation could be achieved by mimicking Apple's Cover Flow UI or present an all-new 3D version of the carousel model. The technique could be extended through to iTunes and other variants may be implemented without departing from the spirit of the invention.

Apple states that the devices that could implement the new carousel browser concept can include an iMac, an iPad, Apple TV, iPod touch, iPhone and beyond. 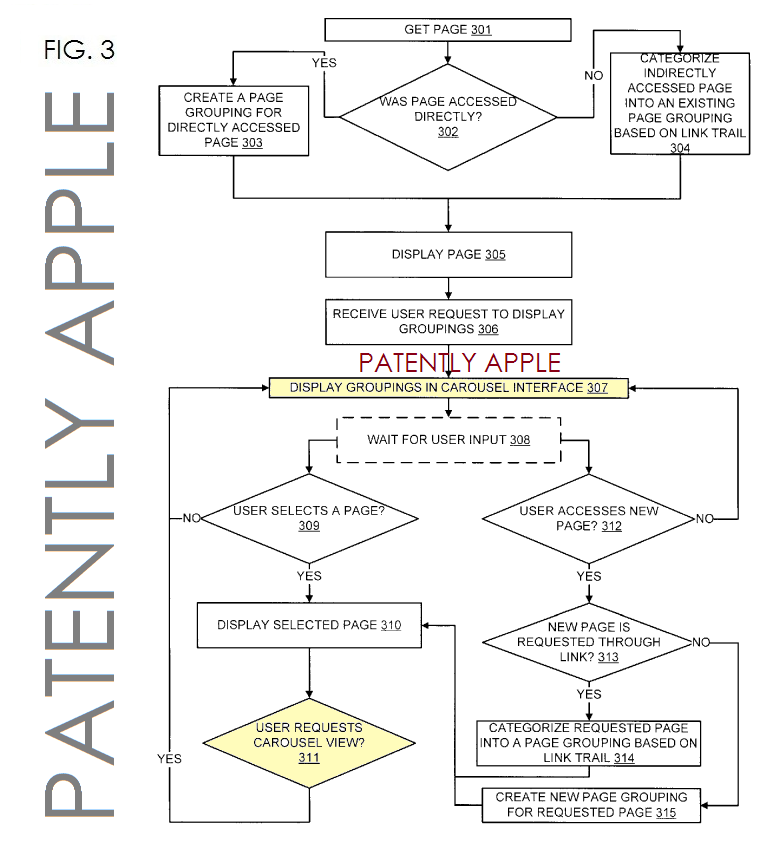 Apple credits Kevin Decker and John Sullivan as the inventors of this patent application which was originally filed under serial number 729706 in Q4 2012.

Some of Apple's other notable patents applications published today include a few relating to the manufacturing process of components for iDevices that some may find interesting.

The most elaborate one is patent application 20130186941 titled "Induction Bonding" which covers a number of methods for shaping a magnetic field are disclosed for the purpose of completing an inductive bonding process without causing harm to unshielded adjacent electrical components. Here are links to Apple's second and third process related inventions. 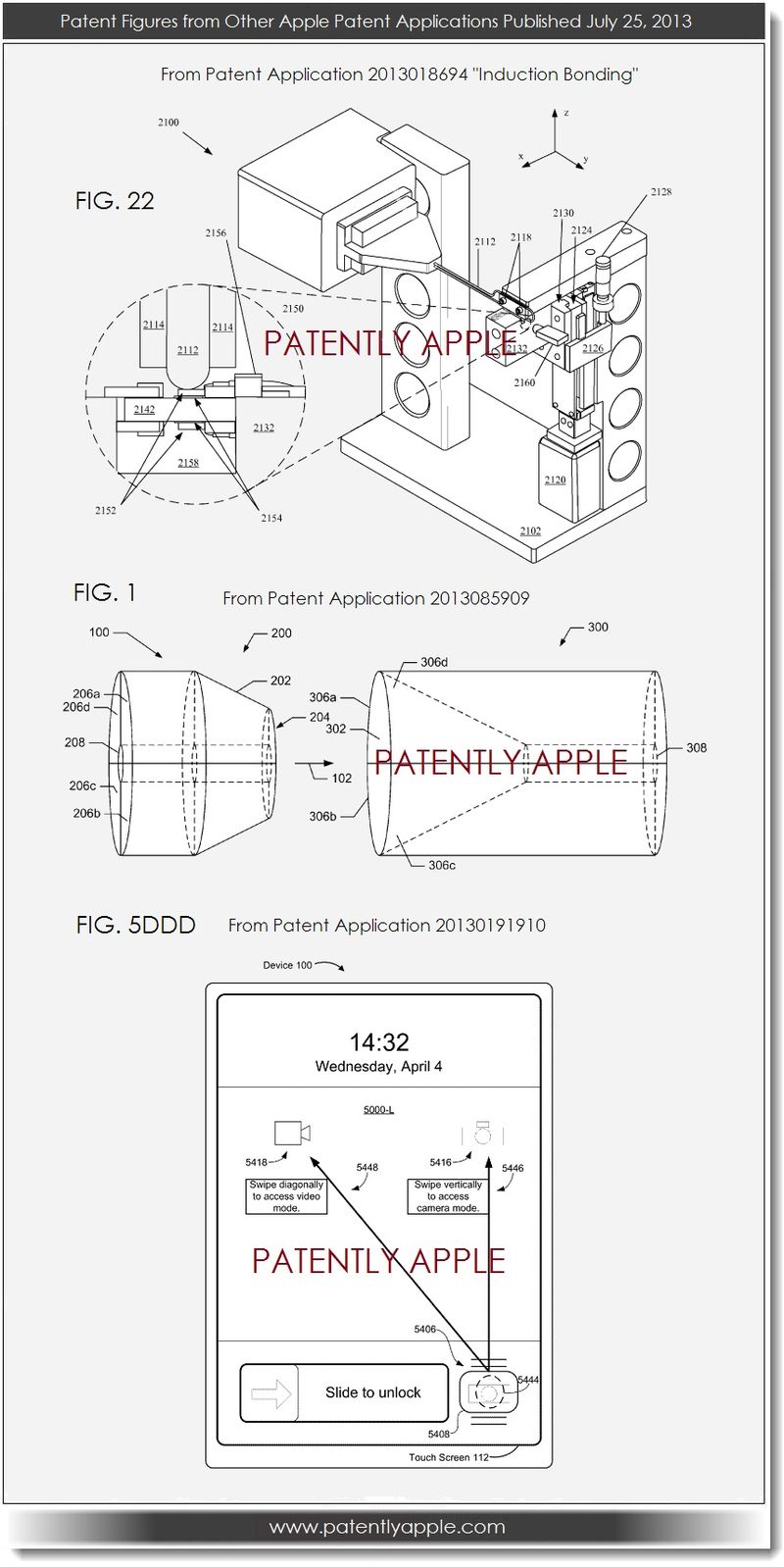 One last mildly interesting patent application published today by the US Patent and Trademark Office covers a Scott Forstall invention that allow users to access their cameras on iDevices without having to login. While there are a ton of graphics associated with this invention, the fact is that we can already do this in a limited way and in light of Apple's upcoming iOS 7 feature known as Control Center, we'll have access to a great number of apps without having to login. With Control Center, users will be able to access a flashlight feature, be able to turn Airplane mode off or on, access Wi-Fi, Bluetooth, a timer, a calculator and yes your cameras (still or video) from the lock screen. With that said, if you're still interesting in reviewing this invention – then check it out here.