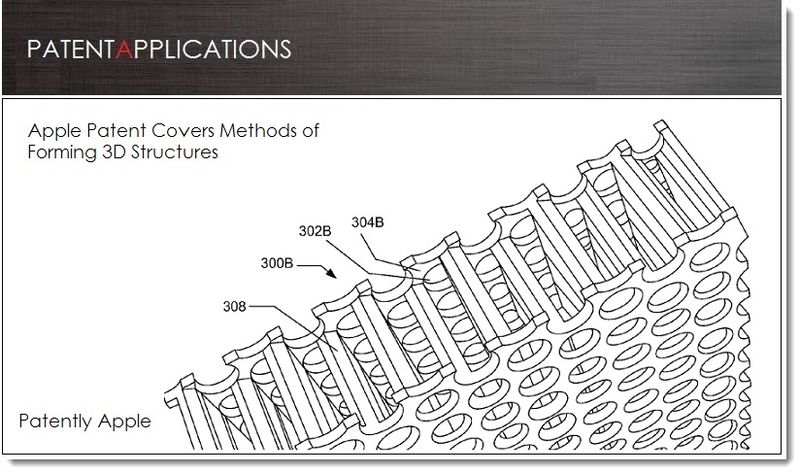 Components of electronic devices may include a variety of three-dimensional structures tailored to the specific purpose for which they are employed. In this regard, components may be configured to provide support to the electronic device, provide protection of internal components from the elements; provide for thermal or acoustic transmission therethrough, or serve one or more various other purposes. The components may also be designed to provide a pleasing look and feel.

While existing components may function sufficiently for the purpose for which they are intended, further advances in components defining three-dimensional shapes and advances in the manufacture thereof may be desirable. 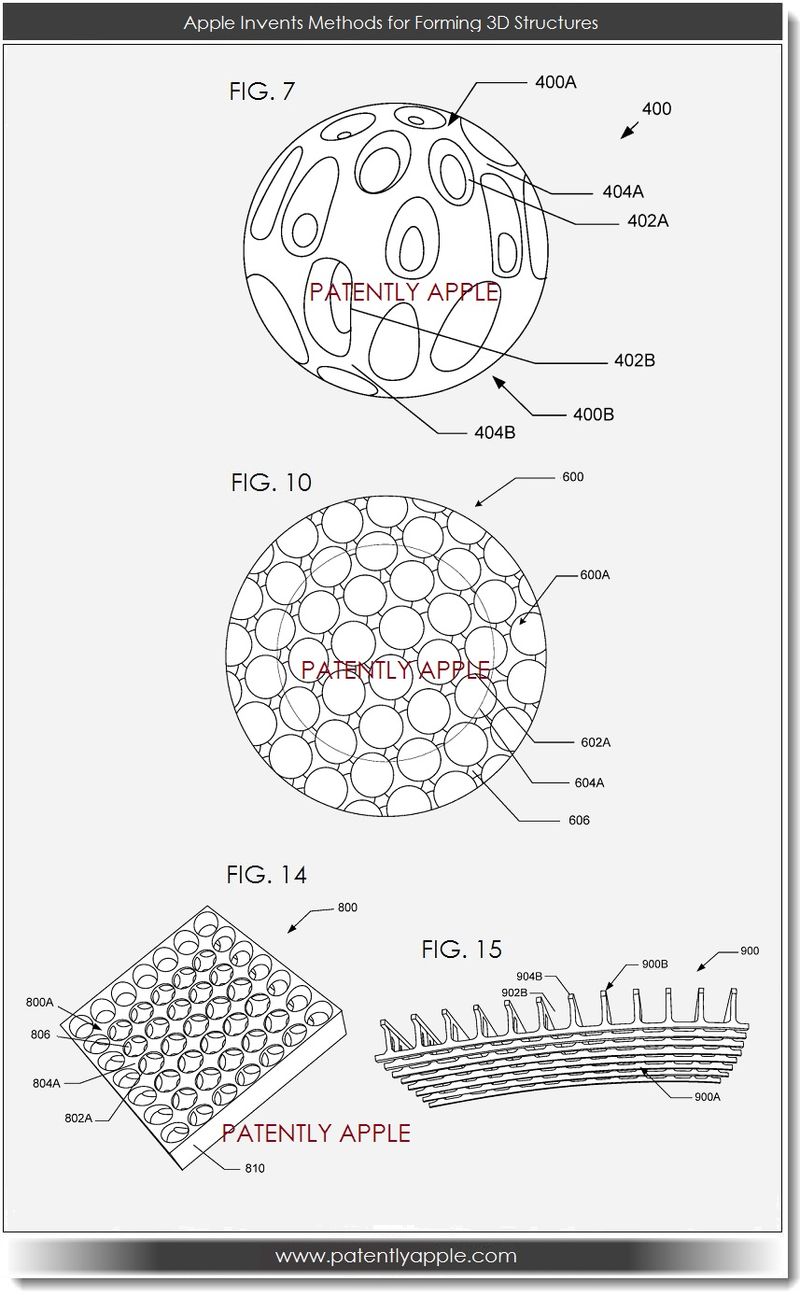 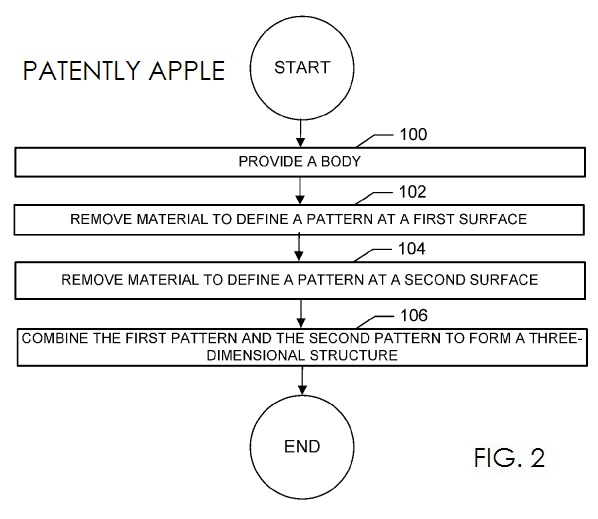 Accordingly, the properties of the three-dimensional structures may be tailored to define a desired configuration. For example, when it is not desirable to allow a user to view through the three-dimensional structure, the apertures may be configured to define a non-linear path there through, while still allowing for airflow and/or sound to travel through the apertures. 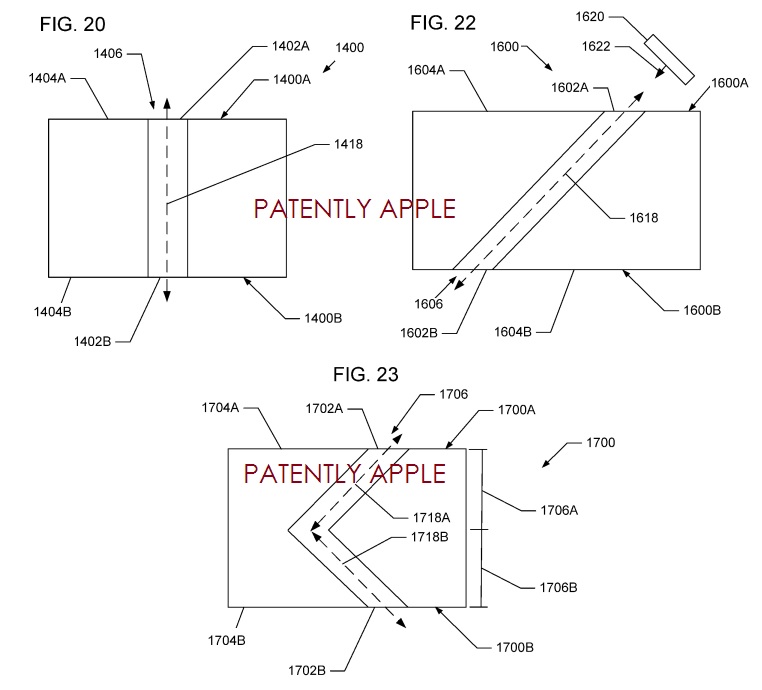 Additionally, a desired ratio and configuration of negative space and positive space may be selected to define a structure having a desired level of lightness, stiffness, flexibility, and/or other characteristics, depending on the application thereof. Thus, for example, the three-dimensional structures may be employed as housings for electronic devices and speaker or vent covers therefore. The three-dimensional structures may also be employed as springs or heat sinks, in various other embodiments thereof.

In Apple's patent FIG. 19 we see a single example of a 3D speaker cover in which the body of the three-dimensional structure defines a housing for a portable electronic device. In this regard, the negative space 1302B of the second pattern may be configured to define relatively small apertures 1306 through the housing 1300 which allow sound to travel therethrough, but which are configured to prevent dust and other debris from traveling therethrough to protect the internal components of the portable electronic device.

Buried deep in the patent is a reference to liquid metal. Apple states that "the structures may be formed by molding or casting, in which a mold or cast is employed to form the three-dimensional structure from a fluid substance, such as a liquid metal or plastic. In another embodiment, material defining a body may be compressed to form a desired three-dimensional shape by forging.

Apple's last detailed liquid metal related patent was discovered by Patently Apple in a European filing this past April. In that patent application, Apple revealed a full range of possible future applications for liquid metal as follows:

"For example, it can be a telephone, such as a cell phone, and a land-line phone, or any communication device, such as a smart phone, including, for example an iPhone™, and an electronic email sending receiving device. It can be a part of a display, such as a digital display, a TV monitor, an electronic-book reader, a portable web-browser (e.g., iPad™), and a computer monitor. It can also be an entertainment device, including a portable DVD player, conventional DVD player, Blue-Ray disk player, video game console, music player, such as a portable music player (e.g., iPod™), etc. It can also be a part of a device that provides control, such as controlling the streaming of images, videos, sounds (e.g., Apple TV™), or it can be a remote control for an electronic device. It can be a part of a computer or its accessories, such as the hard drive tower housing or casing, laptop housing, laptop keyboard, laptop track pad, desktop keyboard, mouse, and speaker. The article can also be applied to a device such as a watch or a clock."

Additionally, the April patent noted above presented us with an overview of possibly using liquid metal to encase the internal components of a future iDevice so that it could be waterproofed. Using that example, Apple could place a speaker wherever there was sufficient space within an iDevice and literally create a channel to funnel the music through to a side speaker such as the example patent FIG. 19 above. In patent FIG. 23 above, we see that a tunnel can be created from a 3D space/structure to support such a design.

Apple credits Bartley Andre, Matthew Rohrbach and Peter Russell Clarke as the inventors of patent application 20130189458 which was originally filed in Q1 2012.

Im not an engineer. But reading through the patent application, it strikes me that an iWatchband fashioned in the above manner would permit flexibility, such as would be required in a previous apple patent describing a "slap" bracelet design, as well as potentially permitting a more comfortable design, in that it would permit wicking away of moisture from the skin of the wearer to the atmosphere. I have been wondering how Jony Ive would manage to make a watchband that was sleek, stylish, durable, and that would potentially function as an integral part of the device itself. Maybe we are seeing it here

Thanks for the reply. I am optimistic at the building body of evidence suggesting Apple is taking this seriously. It will be great to finally hold an iPhone that leverages the benefits of liquidmetal. Apple is definitely not a fast moving company, but if anyone is going to bring this obscure tech into mainstream it has to be them.

Thanks for the report, I look forward to what you publish in the future.

Most of last week's chatter wasn't even based on a true Apple patent. The real patent news came in our April report. Today's published patent application builds on that news, Fazoole.

While it's clear by Apple's patent activity that they're constantly working on this liquid metal project, forecasting a specific product or date for this material would be a guess at best.

Apple worked on the iPhone and applied for over 200 patents over a 7 year period. As consumers we want every great Apple idea to come to market NOW. Yet in the real world, big hit products and projects take time to come to market. But like you, I'd like to see this material finally makes its way to market sooner rather than later.

Why hasn't 9-5 mac or macrumors picked this up. Seems pretty connected to all the liquidmetal speculation from last week. Does this mean a liquidmetal iphone 5s is possible?