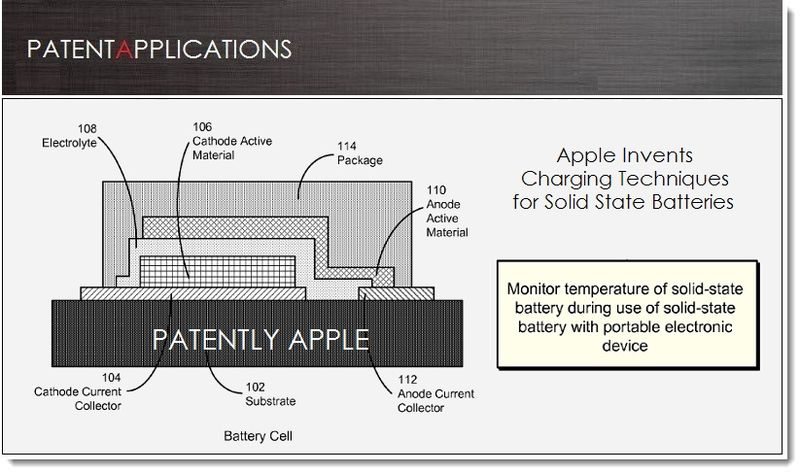 On July 25, 2013, the US Patent & Trademark Office published a patent application from Apple that reveals charging techniques for Solid State batteries. Solid State batteries fall into low-power density and high-energy density categories. On the latter side of the equation, Toyota is working on a Solid State battery for 2020 vehicles that will deliver 3 to 4 times battery life. Obviously Apple is interested in the low-power side of Solid State batteries for iDevices and likely future wearable computers. According to Wikipedia, Solid Sated batteries "are easy to miniaturize and can be constructed in thin film form," which would be great in context with bendable devices and those with flexible displays. They also eliminate the problem of electrolyte leakage found in traditional batteries. This kind of batteries also tends to have very long shelf lives and usually don't have any abrupt changes in performance with temperature, such as might be associated with electrolyte freezing or boiling. At the end of the day, we'd like to see battery life extended for iDevices in the 3 to 4 times range like the goal Toyota is aiming for. Now that would be great news.

Rechargeable batteries are presently used to provide power to a wide variety of portable electronic devices, including laptop computers, tablet computers, mobile phones, personal digital assistants (PDAs), digital music players and cordless power tools. The most commonly used type of rechargeable battery is a lithium battery, which can include a lithium-ion or a lithium-polymer battery.

In some embodiments, the system further increases the charge rate of the solid-state battery if the temperature exceeds a second temperature threshold such as 45.degree. Celsius.

Apple states that the new solid state batteries will apply to such devices as the iPhone, iPad, iPod, MacBooks and more. This would be ideal for bendable and/or wearable computers. 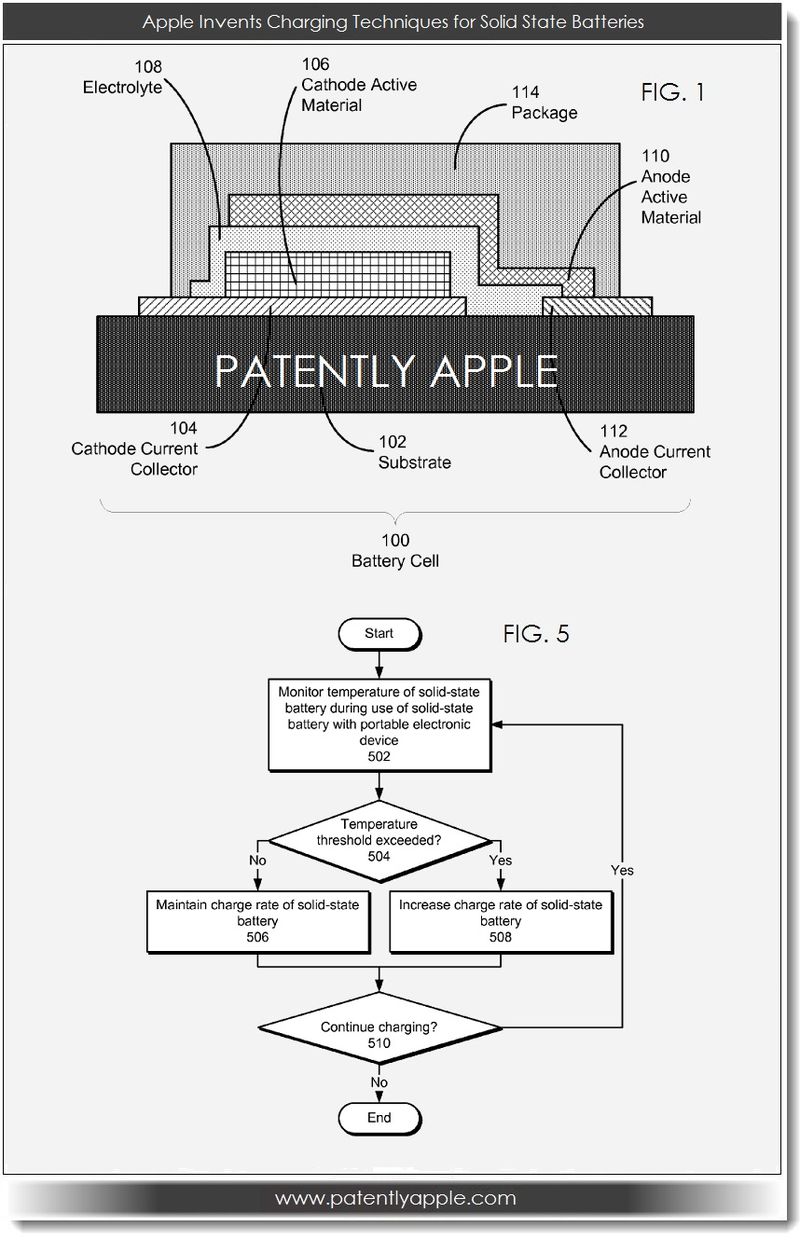 Apple's patent FIG. 1 noted above illustrates a cross-sectional view of a battery cell 100 in accordance with the disclosed embodiments. As shown in FIG. 1, battery cell 100 includes a substrate 102, a cathode current collector 104, a cathode active material 106, an electrolyte 108, an anode active material 110, and an anode current collector 112.

More specifically, FIG. 1 shows a cross-sectional view of a solid-state battery cell. The components of the battery cell may be formed by depositing layers of different materials onto a substrate. For example, the substrate 102 may correspond to a non-conducting substrate such as mica, polyamide, and/or polyether ether ketone (PEEK).

Apple credits Ramesh Bhardwaj as the sole inventor of this patent application which was originally filed under serial number 354179 in Q1 2012.

Until we get to solid state batteries, you check out Apple's other invention published today that  generally relates to power management for electronic devices here.