On July 11, 2013, the US Patent & Trademark Office published a patent application from Apple that reveals their invention that generally relates to alternative coatings for rare earth magnets and more specifically the plating of rare earth magnets with aluminum. The invention covers a magnet surface coating which can be adapted to match the overall look, shape, and feel of the device to which it is attached. The wild twist is that Apple is considering this magnetic coating for the back lid of a future MacBook application. Updated 4:30 AM MST

Apple's patent covers the magnets used in their iPad Smart Cover as well as the application of magnets in MagSafe. Considering that the first two examples of magnetics in use today already exist, it makes the mysterious third application just that more interesting. By designing the MacBook with a backing made mainly of magnetic material a uniform magnetic field can be produced which allows attachment of the MacBook to a number of different surfaces, including for example, refrigerators, metallic armbands, or even a wall mounted docking station.

By spreading the magnetic surface over a wide area the density of the field can be reduced while maintaining enough overall attractive force to support the device on nearly any surface. The less powerful field can be desirable where concerns about magnetic interference are at issue.

It should be noted that in some embodiments only a certain portion of the MacBook's rear housing is made from magnetic material, only enough to allow attachment to a targeted surface. A remainder of rear MacBook can be another structurally robust material that can receive an aluminum coating.

Technically speaking, this could apply to a future aluminum based iPad or iPad mini as well which could be interesting.

And lastly, in a secondary patent filing, Apple presents us with patent FIG. 9 which illustrates that magnets could take on a hollow circular embodiment. Both water jet cutting and laser cutting are both possible methods for creating such shapes. 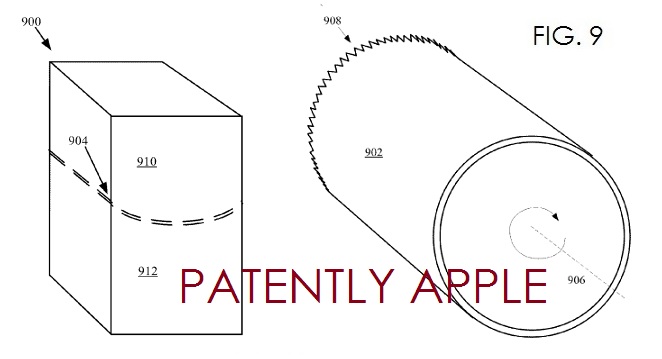 Technically speaking, a circular design could relate to some form of wearable computer, bangle or even a wristband computer. Then again, the world of possibilities are endless, really.

Another invention of Apple's that related to magnets and a MacBook was covered in our report titled "Apple Reveals their Hybrid Notebook Tablet Details."

Google + is now a Registered Trademark