In May, Apple's iPad extended its Web Traffic Leadership

In the three years since Apple's iPad became the first modern web tablet available in the US, the tablet market has continued a steady growth. Tablets have worked themselves into both our daily and workplace lives, and the iPad in particular remains the king of this personal computer segment. New stats that were just released by Chitika actually show that the iPad increased its lead in web traffic for tablets for the month of May by more than a full percentage point.


Chitika's latest report states that "Apple users are still prolific when it comes to tablet Web browsing, while Amazon's Kindle Fire and Samsung's Galaxy Tablet families remain in second and third place, respectively. Apple's iPad usage share increased in May 2013 after a slight dip in April 2013, making its present Web usage share (82.4%) the highest since the beginning of 2013." 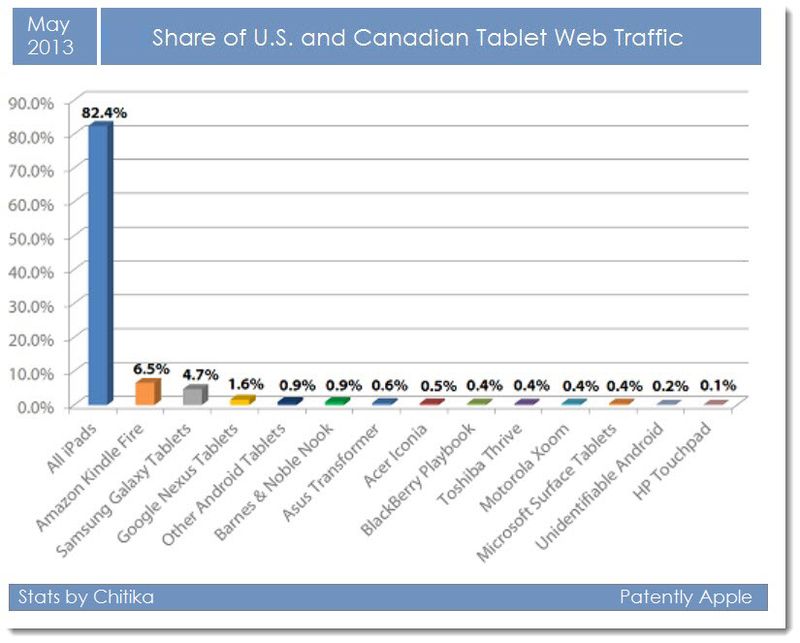 To determine the distribution of Web usage among tablet devices for the month of May 2013, Chitika Insights sampled tens of millions of U.S. and Canadian tablet online ad impressions running through the Chitika Ad Network. The data used within the most recent analysis was drawn across the time frame of May 15 to May 21, 2013.

As can be seen on the graph above, Apple's iPad claimed 82.4% of North American tablet Web traffic, an overall share jump of 1.4% since January. Amazon's numbers fell 0.9% in May while Samsung remained stuck at 4.7%.

For now, baffled by Apple's iPad success, Samsung has resorted to heavily discounting their tablets in certain markets and are about to flood the market with cheap tablets in the hopes of skewing the volume meter in their favor. Will Samsung's new tablets coming to market actually matter in terms of web traffic? Only time will tell.