According to new market research from ABI, more than 39 million tablets shipped worldwide during the first calendar quarter of 2013. That represents the second largest volume of shipments to date; only bested by the previous quarter ending calendar year 2012. The spending power of the largest three world regions is continuing to drive market growth.


Tablets remain a lucrative market for the three largest world regions for consumer electronics and computer adoption: North America, Western Europe, and Asia-Pacific. According to ABI's senior practice director Jeff Orr, the "Three regions of the world are expected to yield 97% of tablet revenues in 2013. North America is forecasted to claim nearly half of the estimated $72 billion expected to be spent this year on tablet devices. Western Europe and Asia-Pacific will also have their hands in the honey pot for a combined 50% of world tablet revenues, respectively." 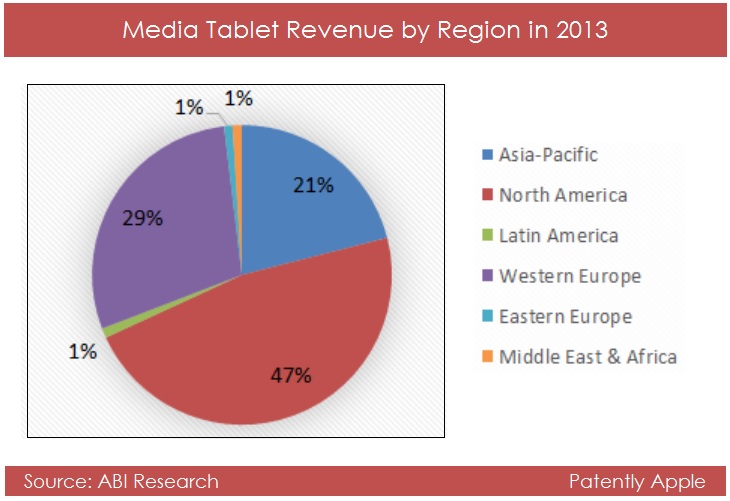 According to an IDC report in May, Apple was the number one table brand in the market in Q1 2013 with 19.5 million units sold. Apple outsold Samsung, Asus, Amazon and Microsoft who accounted for only 14.3 million units sold in the quarter combined. With North America buying over half of the tablets, it's amazing that Apple's iPad holds 82% of all tablet traffic for the first 5 months of 2013. If further illustrates the strength of Apple's iPad brand and the savviness of their user base.

While the ABI research report hyped tablets coming from Acer, ASUS, Dell, HP, Lenovo, Panasonic, Samsung, Sony, Toshiba, and Vizio using Windows 8, the fact is that there's no data to support that these new entrants will materially affect the market in 2013. For now, Apple's iPad is still number one.

I wonder if these numbers could be even stronger in favor of Apple? Because we know for certain two things regarding phones and tablets, that Apple is the only company that releases real sold numbers. Samsung especially, and the others in general only vaguely release shipped numbers.
For all we know, there are million of tablets never sold, that Samsung in particular might even pay retailers to carry on their inventories so they dont have to return them, at least not yet. Because who in their right mind would buy a $300-600 Dollars device and just put it in a drawer to gather dust? There have to be a better answer, and not sold could be it.

But we cannot expect any type of true investigative journalism from today's tech press. These boys are not journalists, they are fan, and report the news as such. Shamefull !!!!!!

As for Canada, there's no data as to the exact numbers of tablets sold by company, so I quoted the web traffic numbers which covers Canada and the US. That accounts for 82%.

The US is likely 90% + of North American sales. Technically, you're correct. Yet realistically speaking, the headline is representative of what the reality on the ground is in "North America."

The US is only part of North America. #misleadingtitle