Apple Takes the Lead in the Next Battlefront: Advanced Eyes-Free Services for the Car 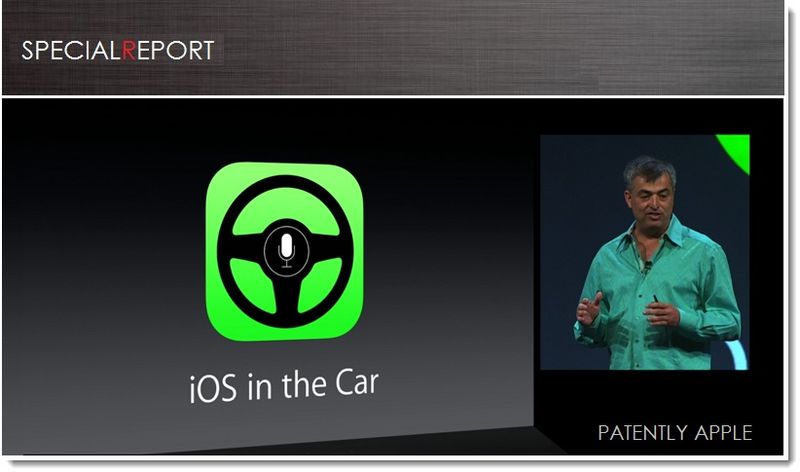 In 2012 Apple's VP of software and iOS Scott Forstall announced that nine car companies had signed on to eyes-free Siri services with Hyundai signing on as the tenth in January. Then came Eddy Cue's announcement at this year's World Wide Developer Conference (WWDC) that "iOS in the Car" was going to be available in cars in calendar 2014, which translates to new 2015 models debuting in late Q3 and early Q4 2014. Apple appears to have the lead in one of the next battlefronts in the market: eyes-free digital services for the car. Patently Apple has discovered that Microsoft is also "eyeing" this market. A new patent filing published this week by the US Patent and Trademark Office revealed one of their projects for eyes-free services for the car, and our report will give you a peek at what they've got on the drawing board. Yet at the end of the day, Apple has made a firm announcement as to when iOS in the Car will be ready whereas Microsoft is still in the dream state with nothing concrete in sight.


Eighteen Car Companies on Cue with iOS in the Car

We begin our report by providing you with two photos from two distinct keynotes juxtaposed to clearly show you that Apple officially has a minimum of eighteen car companies signed on to introduce iOS in the Car beginning in the second half of 2014. This is going to be a huge win for Apple who has been working on this for a few years now. 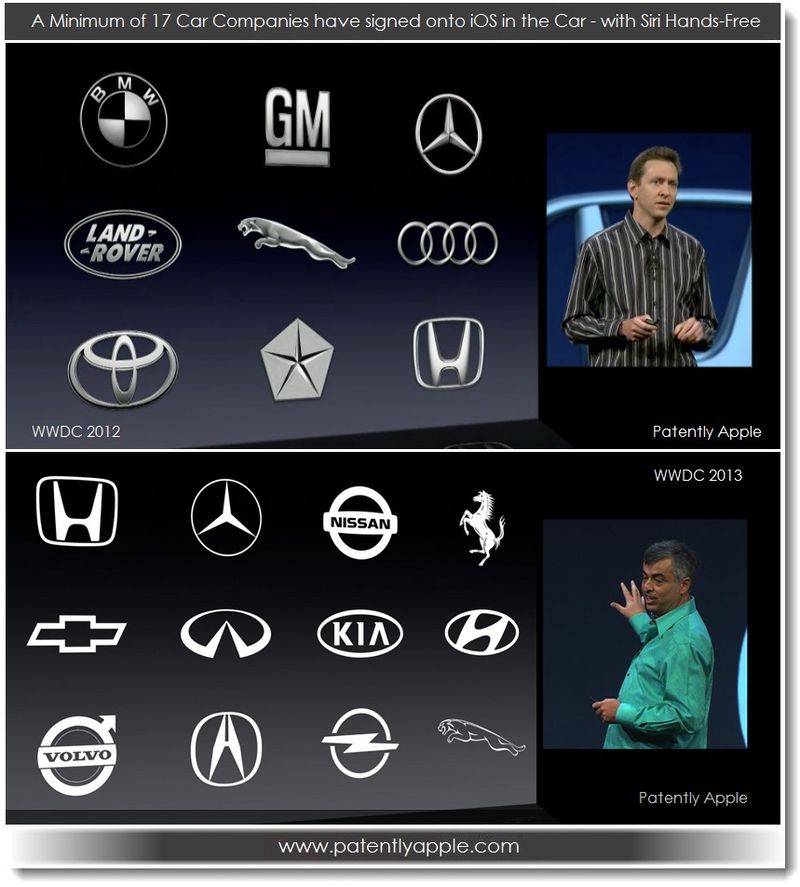 We first heard about this project from Scott Forstall during his WWDC keynote in 2012. One year later, and Eddy Cue showed off Apple's progress. It's a grand overview of the car companies that will finally modernize our in-vehicle communications and begin to add modern services like Maps and Directions in a eyes-free manner. 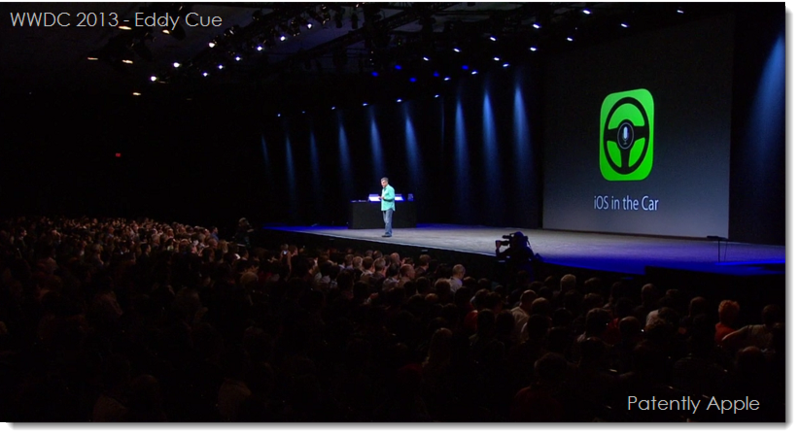 Eddy Cue began the segment of his keynote about iOS for the Car by stating that "Now, 95% of the cars being sold today have integrated music playback and control from an iOS device. But we want to take this integration to a whole other level. What if you could get iOS on the screen that is built into your car? So that you could make phone calls, play music, go to maps … get your iMessages right on the screen of your car and eyes-free using Siri. So now, when you make a phone call, it's going to look something like this; [voice command] – call John Appleseed (as shown in the slide below). 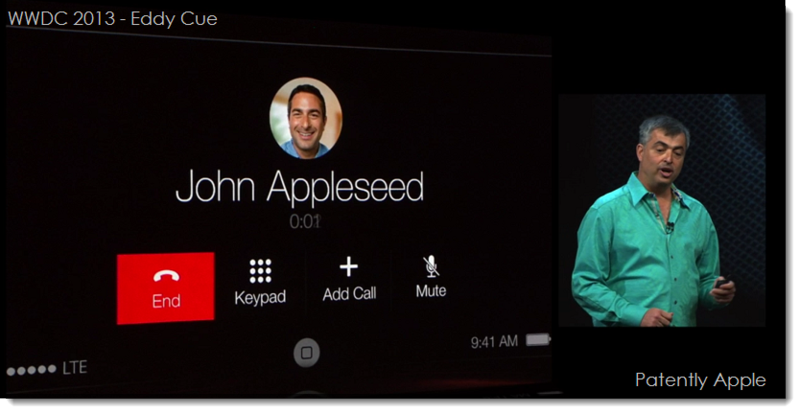 Or, [voice command] "play get lucky" (as shown in the slide below). 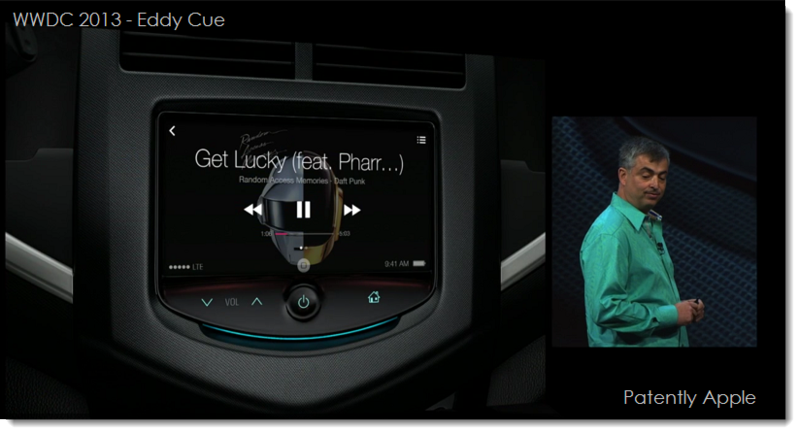 Or, [voice command] "Go to Maps. Get directions." (As shown in the slide below). 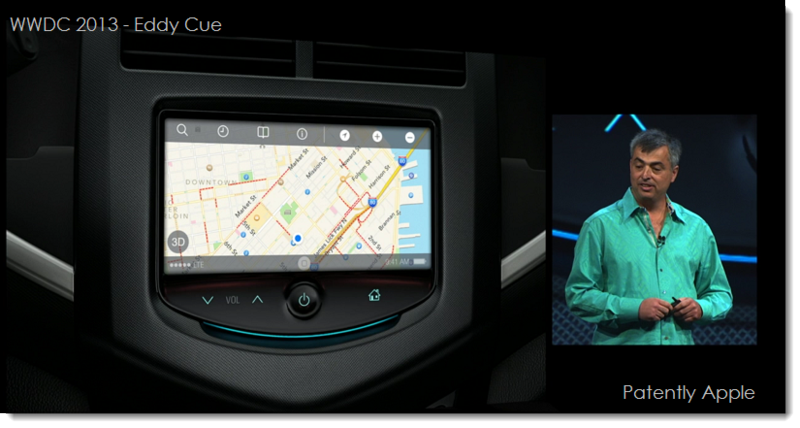 Or even get your iMessages read to you and you can dictate a response, all eyes-free."

The new car companies that are listed on Eddy Cue's keynote slide above include Ferrari, Opal, Nissan, Kia, Volvo, Chevy, Acura and Infinity.

Eddy Cue's sneak peek at iOS for the Car is really only the beginning. At present, Apple has a few other ideas on the drawing board that has surfaced in related patent applications. In hindsight, we could now see that Apple could add technologies to "iOS in the Car" that would eventually support a service for finding your vehicle in a parking structure and/or provide new panoramic street view detailing as part of their future Map service.

Just this week we discovered a new patent application from Microsoft that detailed a new and elaborate in-vehicle system promoting eyes-free operations so that users can make phone calls, answer emails and so forth, safely. 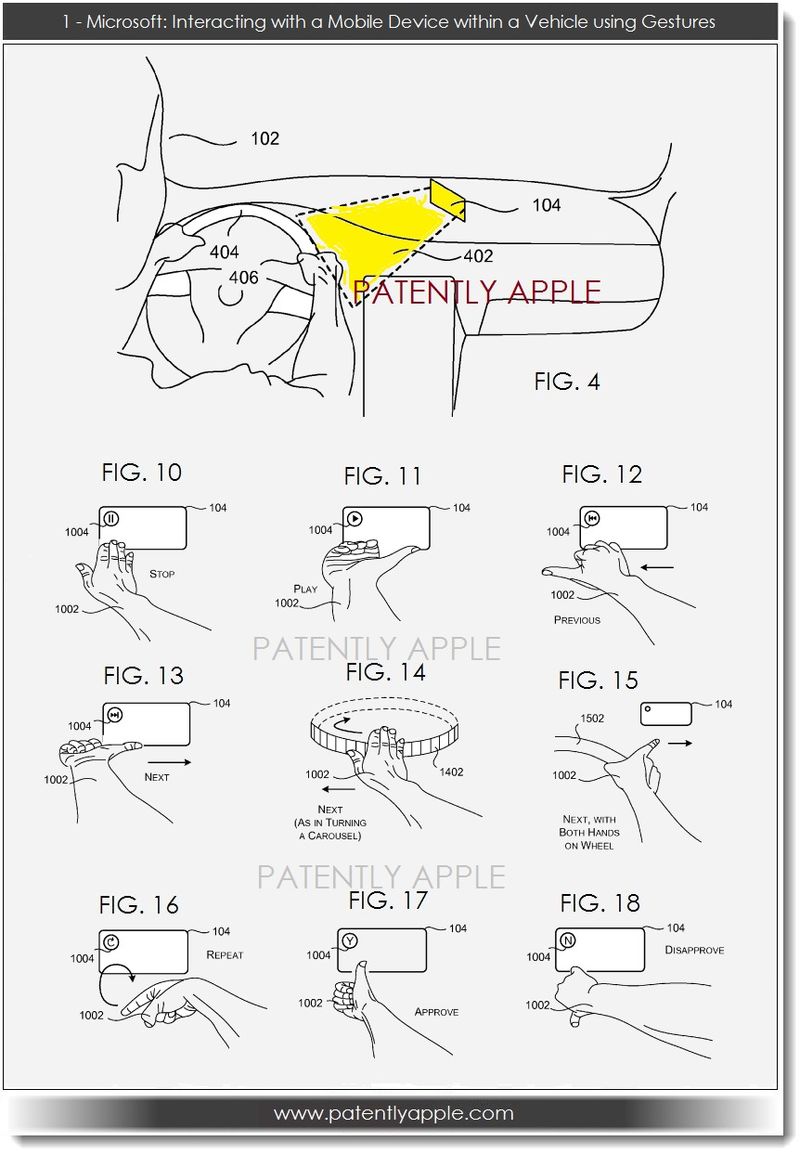 As noted above, Microsoft's proposed system is to work with a mount that secures a smartphone to the top of the vehicle's dashboard. One example of a mount is illustrated in patent FIG. 3 below. 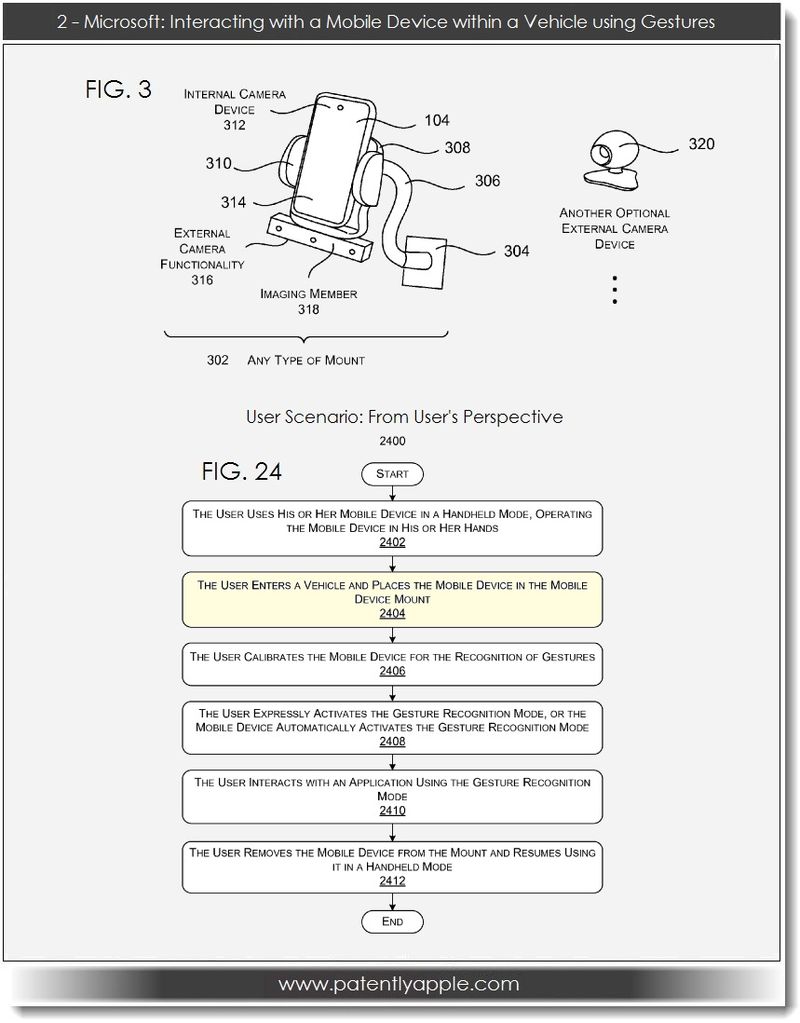 The new system may work with the smartphone's camera or a mini version of their Kinect motion sensor system so as to create a field between the smartphone and the steering wheel where a user's hand gestures could be read to control music, phone and other features relating to eyes-free operations.

Additionally, one or more projectors provided by the smartphone and/or the mount will be able to illuminate the interaction space as we've highlighted in patent FIG. 4 above.

While Microsoft's invention is interesting, it can't even begin to touch the convenience that Apple's Siri-centric "iOS in the Car" service will bring to market next year. Once Apple focuses a new service for Siri, it's simply the best in its field. And for the car, it's going to be a pleasure to use while being a hit with new car owners.

Contrast that to Microsoft's solution that may have some interesting features but in reality is a very complex system because you have to "train" the system to recognize a series of gestures that the user so chooses to use. Take a look at a few of the gestures below to see how moronic gesturing could actually be.

While gesturing has its place, the vehicle isn't one of them. If it takes your hands off the steering wheel, then it seems to have lost its way.

That's not to say that Microsoft or other companies won't be able to compete with Apple over time, because they will. In fact a new GM patent application published last week shows that GM is working with Apple in respect to making sure that their future in-vehicle dashboard infotainment systems will work with iCloud. Translation: iOS in the Car. But GM is making sure that their system will also work with social networks like Twitter and Facebook too. Yet the real winner here is Apple and they get to rack up car company number 19 that will be joining their already impressive list of car companies working with their future in-vehicle service.

Apple's desire to share news about this project with the public is quite unusual. They're famous for keeping all "future" projects, initiatives, products and/or services under tight wraps until they're ready to execute. So Apple's "iOS in the Car" is truly one of the only initiatives that they've exposed this early on for over a decade. That's a sign of confidence that we'd love to see more of going forward.

For now, it appears that Apple has the lead in a very important new market area. Who doesn't love to listen to music in the car? And with Apple working on possible future FM radio TV services via RDS or similar technology, we'll be able to buy tunes on-the-go with either a simple Siri command or a push of a button.

The only thing that I'm hoping for is that recent car models will be able to upgrade their infotainment systems with Apple's new service. I just bought a Nissan last year and I'd love to be able to upgrade to Nissan's iOS for the Car system coming next year. I'm sure that there will be millions hoping for that as well. Here's to hoping that the car companies on Apple's list get the message loud and clear that those that have purchased cars in the last couple of years want this solution too.

At the end of the day – Apple has taken the lead in one of the next digital battlefronts concerning advanced eyes-free services for the car.