Patently Apple has discovered a new patent application in Europe that's quite fascinating. Many assume that Apple is using Corning's Gorilla glass for the iPhone 5 but Apple's latest patent puts that into question to a certain degree. Especially in light of Apple's use of thinner In-Cell glass, Apple may have used a new process for strengthening their thinner glass. The patent doesn't confirm if the patent pending process was used in the manufacture of the current iPhone 5 or is one destined for future iDevices. But it's abundantly clear that Apple has a new process for strengthening thin glass that involves the use of a very sophisticated "Glass Ion Exchange Bath" system. While those who love Apple products can feel the magic of using their iDevices, most will never know the depth and lengths that Apple will go to get a product just right. Apple's latest patent is proof of Apple's dedication to excellence.

In September 2012 Apple introduced new In-Cell iPhone glass technology that Phil Schiller referred to as "Integrated touch." Schiller added that their engineering team had "done some breakthrough work and have integrated touch sensors right into the display itself," to make it 30% thinner than the iPhone 4S, making it "truly the world's most advanced display." 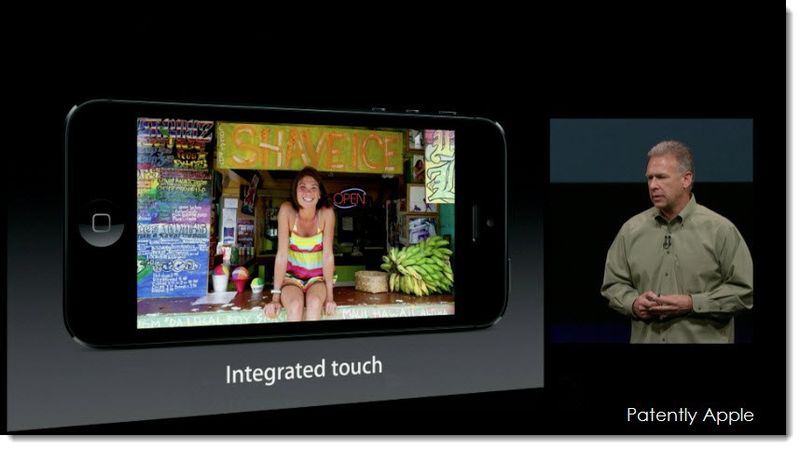 A new patent application that Patently Apple has discovered in Europe focuses on strengthening iPhone and other iDevice glass. Whether Apple used the new glass strengthening process for the iPhone 5 and then patented the process – or filed the patent later with the intention of using it in future products is unknown at this time. Yet it's clear that while one engineering team focused on making the glass process thinner for "Integrated touch," another team was assigned the task of strengthening the new thinner glass.

As Apple's patent filing frames it "the thinner the glass the more susceptible the glass is to damage when the portable electronic device is stressed or placed under a significant force. There is a continuing need to provide improved ways to strengthen glass, namely, thin glass."

Apple's new invention generally relates to increasing the strength of glass by using a new monitored ion exchange bath process which is illustrated below in patent FIG 1.

The apparatus, systems and method for improving strength of thin glass are especially suitable for cover class or LCD displays, particularly those assembled in small form factors such as the iPhone, iPod touch and so forth. The glass can be thin in these small form factor embodiments, such as those between 0.3mm and 2.5mm.

Apple additionally confirms that the process could be used in respect to larger display as well, including the iPad, MacBooks and televisions, such as those less than 5mm. 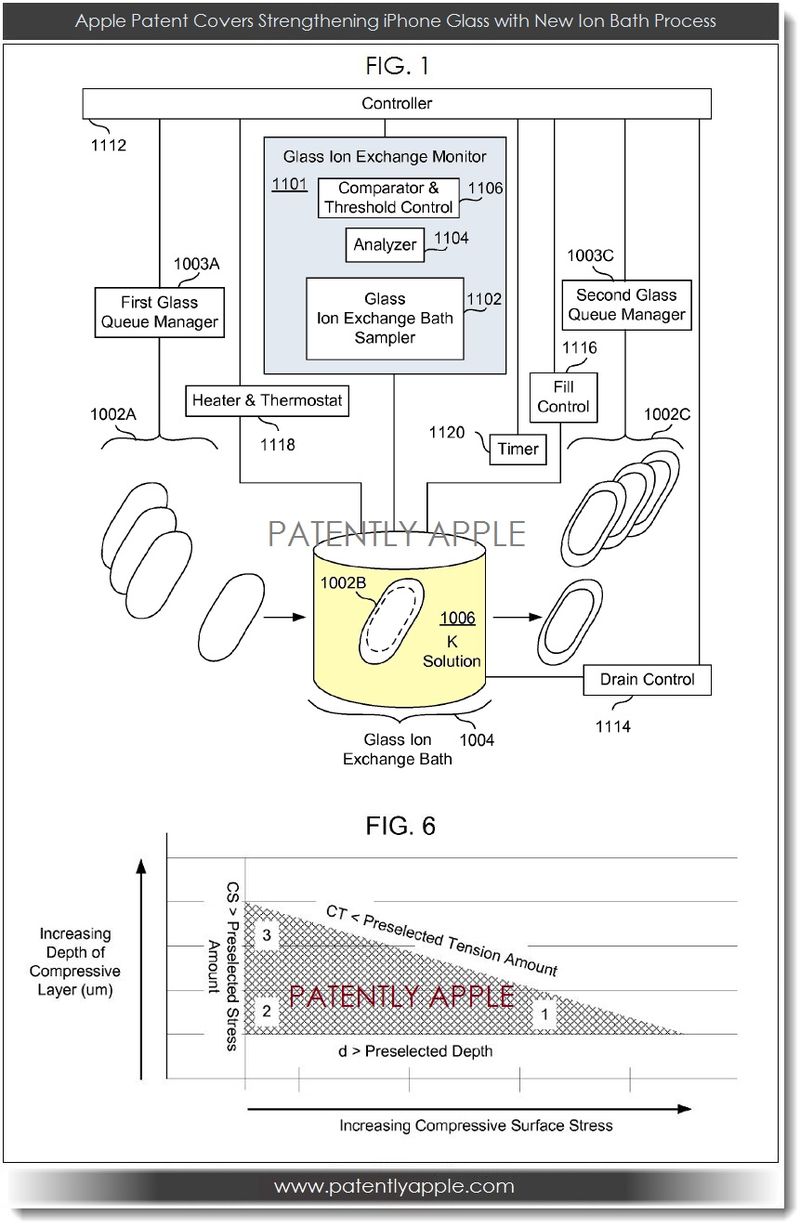 The degree of chemically strengthening provided by the glass ion exchange bath (noted in patent FIG. 1) to cover glass may be dependent on the type of glass and on processing parameters. In one implementation, the cover glass can be alumina silicate glass or soda lime glass. For example, cover glass can be immersed in a heated potassium bath at a temperature of about 300-500 degrees Celsius for a predetermined duration of about 6-20 hours. Also, glass from different suppliers, even in the same type of glass, can have different properties and thus may require different processing parameters.

Most of Apple's patent filing is in engineering talk that sounds like they've created advanced glass for an alien space ship. Patent FIG. 9 below illustrates this point. Apple's patent FIG. 9 is a diagrammatic representation of a chemical treatment process that involves submerging cover glass in a glass ion exchange bath.

By being able to control the duration of a chemical strengthening treatment, temperature and/or the concentration of Alkali metal ions (# 936 below) in the glass ion exchange bath, the layer depth of chemically strengthened layer may be substantially controlled. 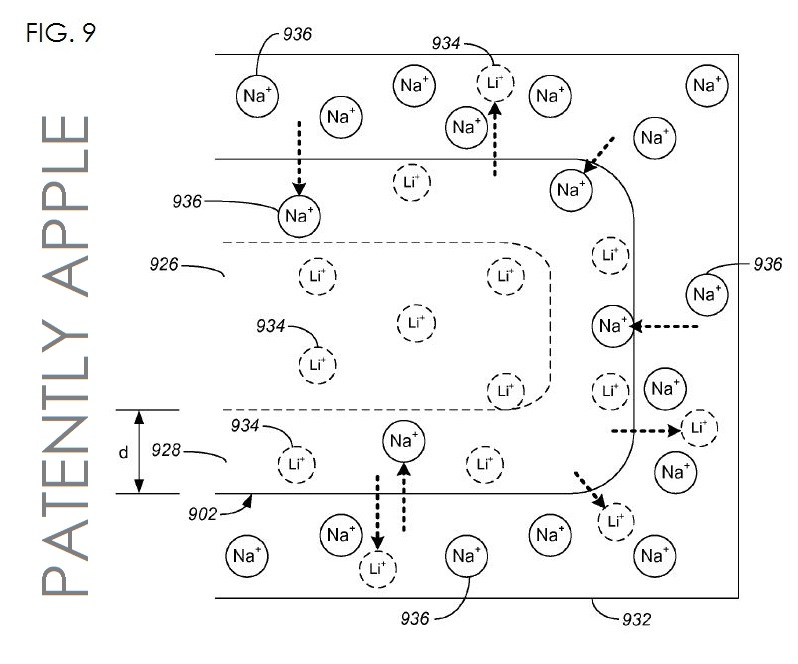 In describing the technology buried in the new iPhone 5 last year, Phil Schiller stated that "It is really easy to make a new product that's bigger. Everyone does that. The challenge is to make it better and smaller.

Today you've gotten to see some of the technology that goes into or will go into making an iPhone "better." Today you can see that making thinner glass extremely strong takes quite the process that the general public will really never appreciate. Yet this is Apple digging layers deep into the creation of an iDevice to make sure that it feels so special, so light, so durable and so enjoyable to use.

Apple credits Douglas Weber as the sole inventor of patent application WO2013/077999 which was originally filed in November 2012 and made public one month ago to date.

2. Apple gains FIPS 140 level 2 cryptographic compliance for A4, A5 chips

Gorilla Glass is a brand from Corning. Apple could be using Corning's strengthened cover-glass, but it may not be Gorilla. Neither Apple nor Corning have ever said that Apple uses Gorilla branded cover glass. It is more likely that while the rest of the industry uses Gorilla, that Apple gets a specific glass from Corning, which is different from the Gorilla branded coverglass that others use.