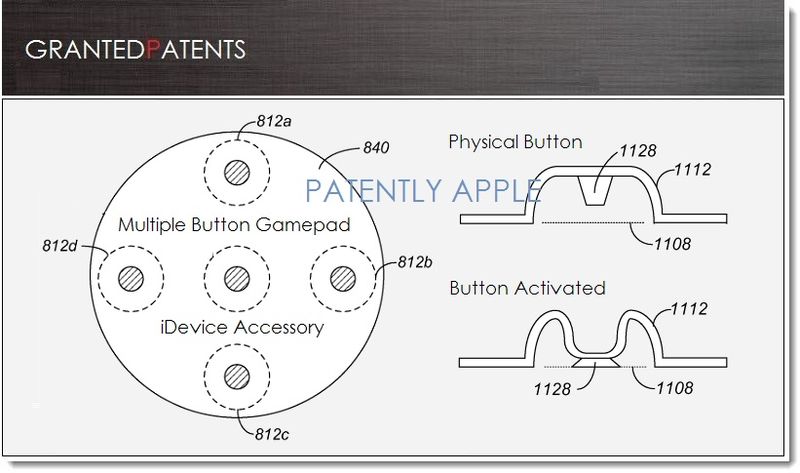 The US Patent and Trademark Office officially published a series of 37 newly granted patents for Apple Inc. today. In this particular report we cover one of Apple's gaming accessory inventions that cover a gamepad and joystick. Virtual gaming controllers just don't have that tactile touch that is needed to assist gamers so that they could keep their eyes focued on the game rather than on where the controls are. Even the new PS4 and Xbox controllers debuting this year have stuck with physical buttons and joysticks because that's what players need at the moment until haptics could get to a point where physical buttons could be eliminated. Apple's patent covers attachable game controller accessories that could simply stick to the touchscreen surface of a roomy iPad display to give the gamer more control over their games. It also assists developers to have a common gamepad/joystick structure so that more games could follow a specific guideline for controller activity. UPDATED JUNE 14, 2013


Apple is granted a Patent for Gaming Accessories Designed for iDevices

Apple has been granted a patent today for their invention relating to portable electronic devices and, more particularly, to a structure which enables touch-sensitive areas of a touchscreen to be activated. The patent describes iDevice accessories that cover both gamepad and joystick attachment structures that could be attached and removed quickly.

Although the patent generally notes that Apple's invention could apply to such things as automated teller machines (ATMs), point-of-sale payment devices and the like, the fact is that a gaming application may be the true focus of this accessory patent. The gaming angle is also one that Apple is protecting under their patents.

Apple's patent FIG. 8 shown below is a diagrammatic representation of a portable electronic device with a touchscreen on which a button attachment structure that includes multiple buttons is attached. Translation: It's a gamepad being described. 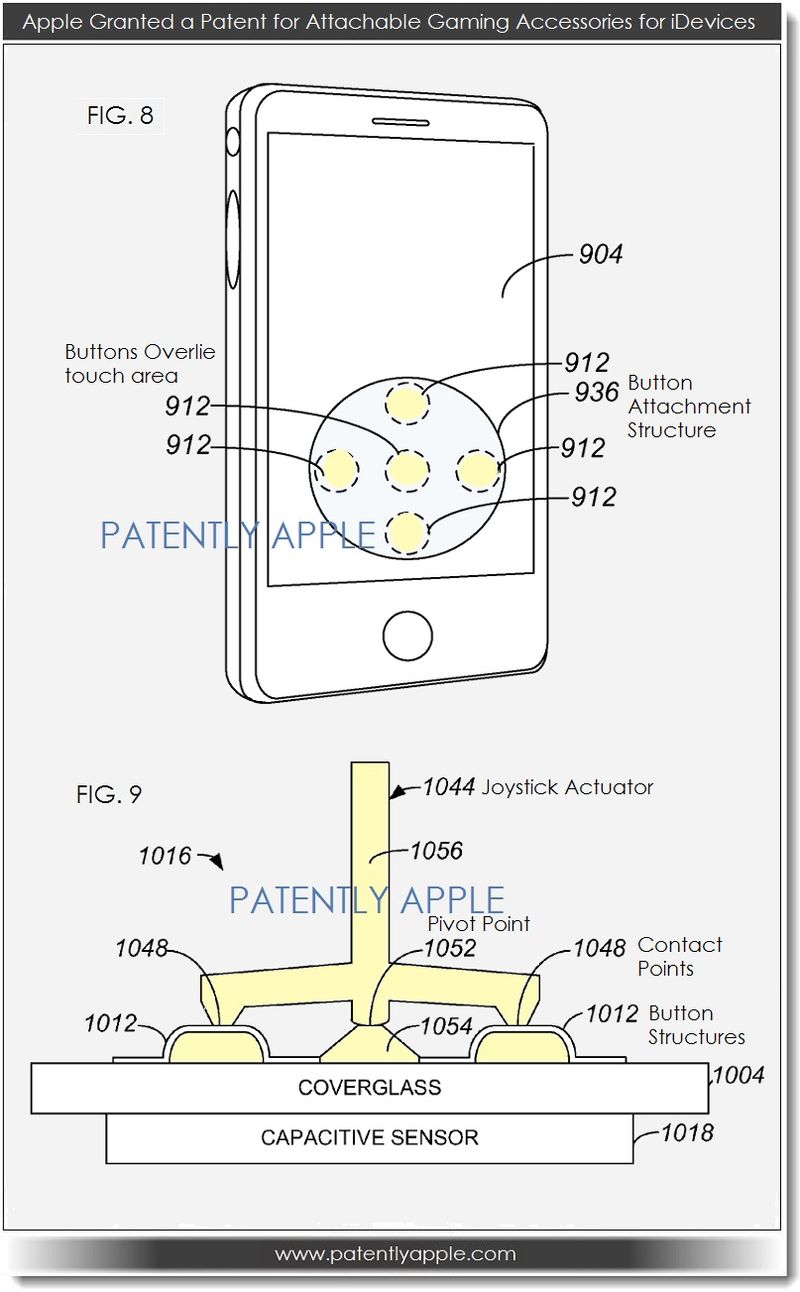 Apple's patent describes that the joystick accessory noted above as patent point # 1016, includes an assembly that with a capacitive sensor over which a coverglass is positioned. A plurality of button attachment structures are coupled to a top surface of the coverglass.

A joystick actuator which may be formed from a material such as rubber or plastic that will include a shaft portion and various contact points as noted above in patent figure 9.

Apple credits Stephen Lynch, John Filson and Fletcher Rothkopf as the inventors of granted patent 8,462,133 titled "Clickable and tactile buttons for a touch surface," which was originally filed in Q3 2008 and published today by the US Patent and Trademark Office.

The document states that controller specifications and related software support will be included in iOS 7, a forthcoming version of Apple’s mobile operating system unveiled at its annual developer conference Monday. They will also be included in OSX 10.9, or Mavericks, a new revision of the Mac operating system.