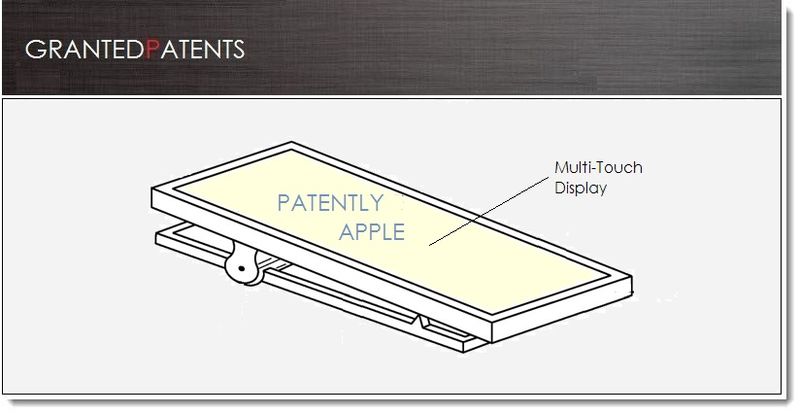 The US Patent and Trademark Office officially published a series of 30 newly granted patents for Apple Inc. today. While our report covers all of the granted patents that were issued to Apple today, we specifically highlight four patents relating to Multi-touch, simplified NFC data transfers, a revealing new wearable media player and iMovie editing. Lastly, Apple was granted two design patents today with one of them notably crediting Apple's late CEO Steve Jobs.

While the exemplary example devices include the iPhone and iPod touch it is clear that it applies to the newer trackpads found on Apple's MacBook Pro/Air product lines. 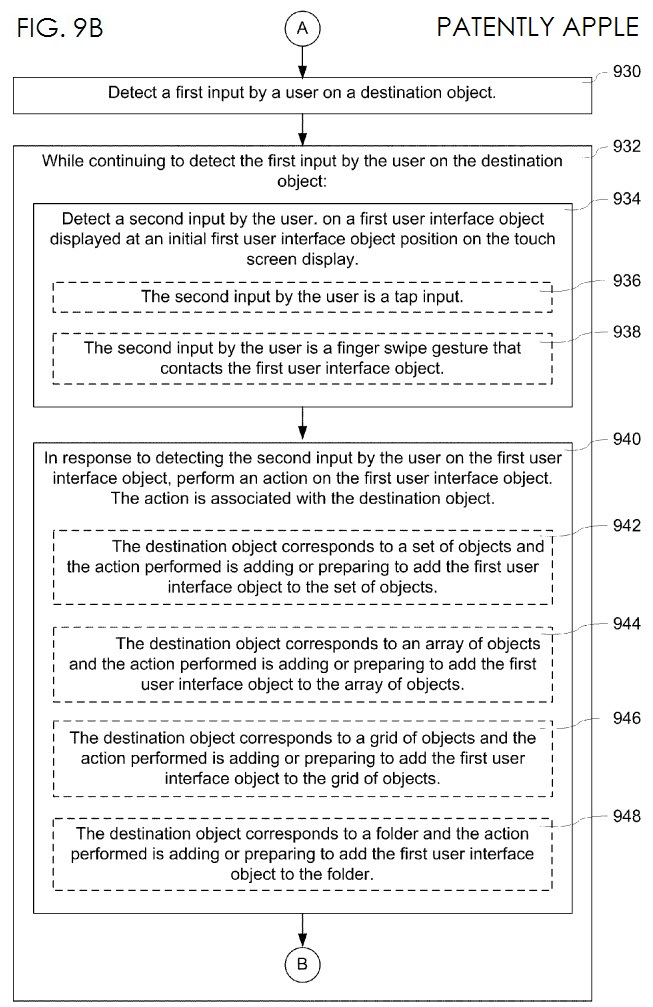 Apple credits Michael Victor as the sole inventor of this granted patent which was originally filed in Q3 2009 and published today by the US Patent and Trademark Office. This is a major patent that covers 67 patent claims and well over 100 patent figures. To review today's granted patent claims and details, see US Number 8,456,431. A secondary patent on this subject matter was granted under number 8,458,617 which carries an additional 16 patent claims.

Apple has been granted a patent today for their invention relating to electronic devices, and more particularly, to buttons whose behavior may be modified in real time based on sensor readings.

Unlike today's iPod Shuffle with a scroll-wheel-like interface, Apple's patent FIG. 14 shown below illustrates an all-new design that has yet to surface that includes a tiny multitouch display/Button as illustrated below:

Apple credits John Filson, Stephen Lynch, Emery Sanford and Jan Moolsintong as the inventors of this granted patent which was originally filed in Q3 2008 and published today by the US Patent and Trademark Office. To review today's 12 granted patent claims and details, see US Number 8,456,330.

Apple has been granted a patent today for their invention relating to transferring information between electronic devices and, more particularly, to transferring information via one or more electronic devices in a simplified manner using NFC. Transferring the data may take place using a peer-to-peer connection other than via NFC. The latter is important to note because Apple's VP of Worldwide Marketing Phil Schiller has downplayed NFC's significance.

The technology described is to allow the transfer of data quickly between devices like an iMac to an iPod by simply tapping the devices together. The technology applies to a wide range of in-home devices such as Apple-TV, game consoles and beyond.

Patently Apple covered Apple's original 2009 patent filing describing this simplified data transfer application which Apple designated as "Grab & Go" way before there was ever an S Beam feature by Samsung. Apple also described the tapping of devices for data transfer in their 2010 iWallet patent application. 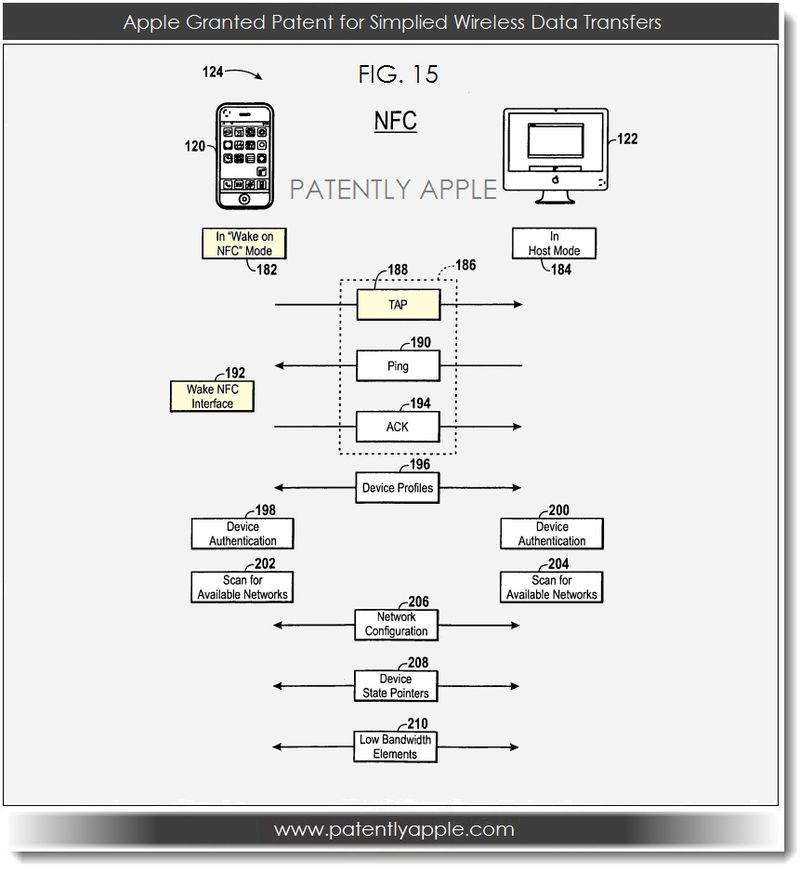 Apple credits Michael Rosenblatt, Gloria Lin, Amir Mikhak, Taido Nakajima, Sean Mayo, Andrew Hodge and Anthony Fadell as the inventors of this granted patent which was originally filed in Q3 2008 and published today by the US Patent and Trademark Office. To review today's 14 granted patent claims and details, see US Number 8,458,363.

Apple's granted patent generally relates to a simplified way of performing keyframe editing in iMovie. This includes the ability to affect multiple keyframes for multiple attributes to avoid repetitive editing to achieve the same results for multiple attributes. The patented method allows its user to perform simple to complex keyframe editing with minimal drawing skills and without having to understand how control points and Bezier handles work. 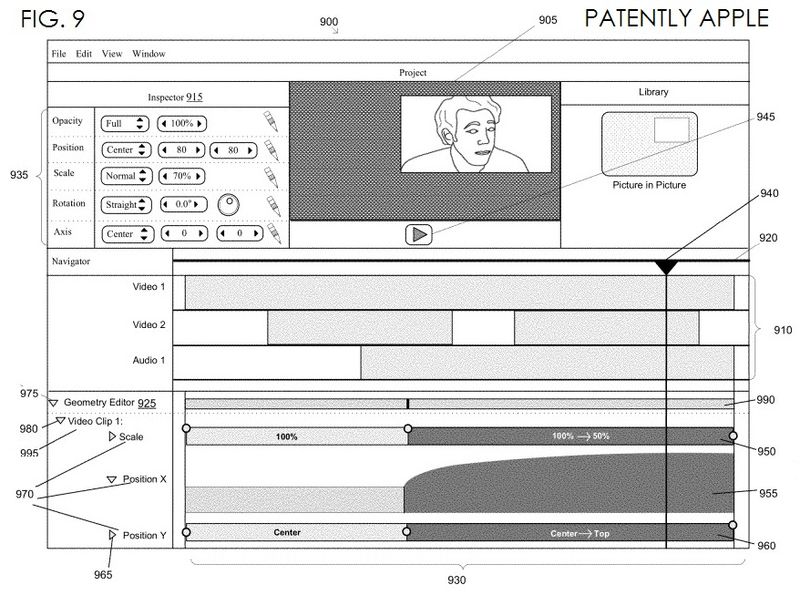 Apple credits Tom Langmacher and Samuel Liberto III as the inventors of granted patent 8,458,593 which was originally filed in Q3 2009 and published today by USPTO. 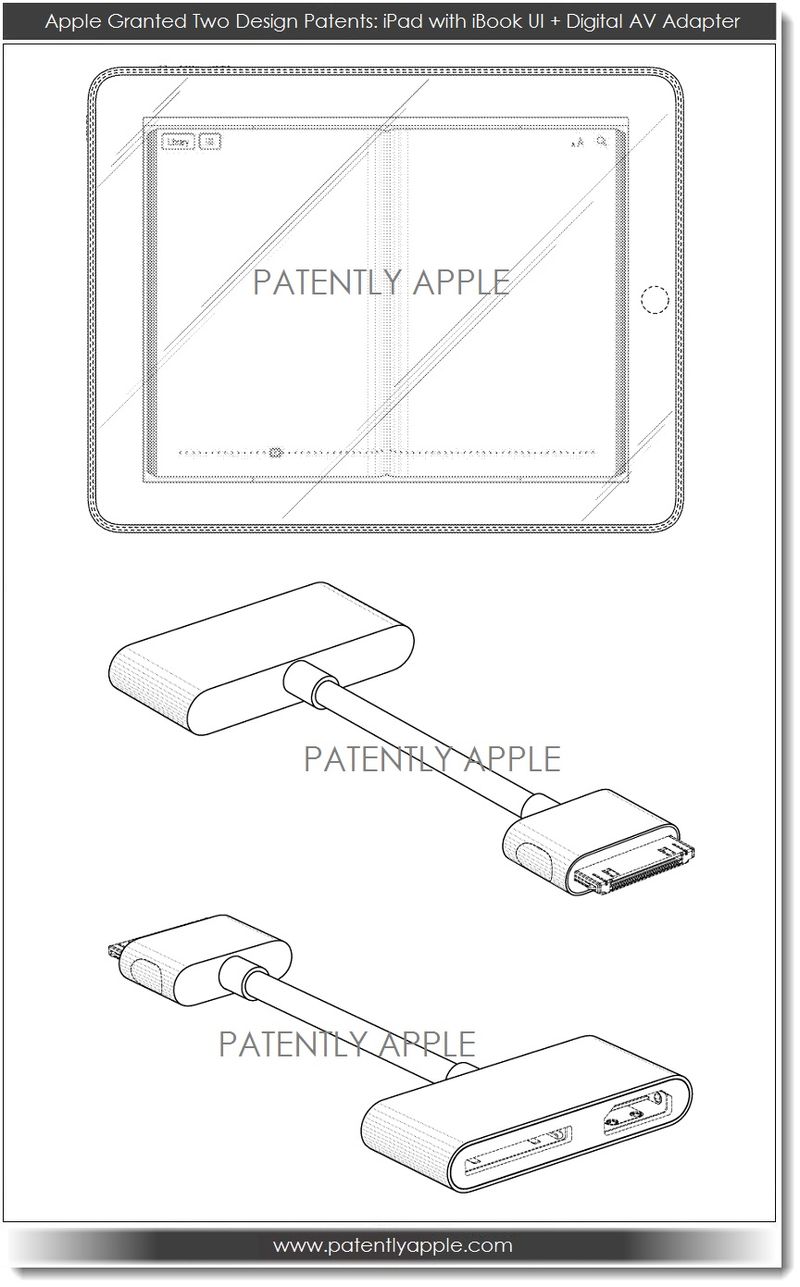 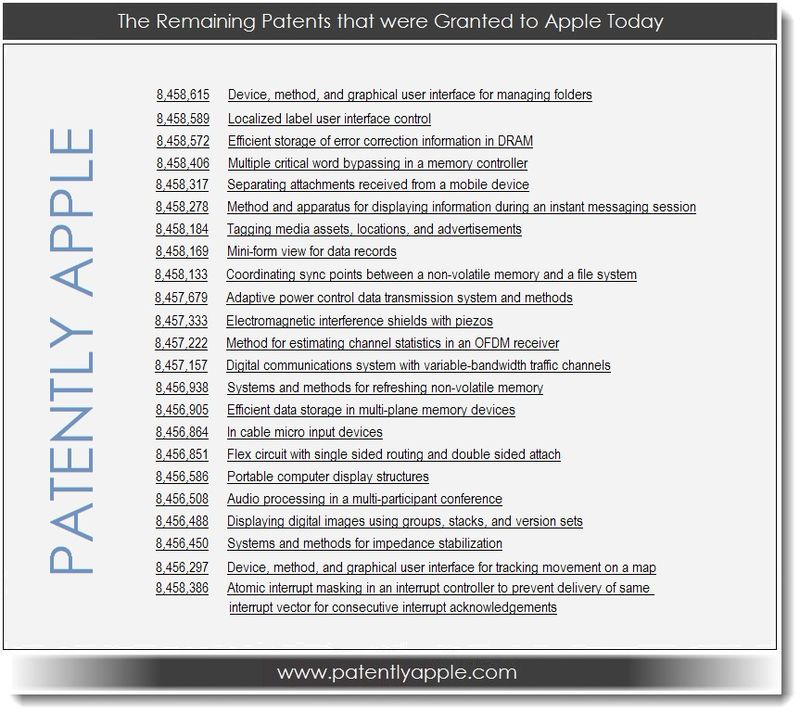 Anyone else think its obvious that apple plans to add sensors to everything? ishoes, iwatch, iclothing.. Timmy Cook just happens to be on the board of directors for Nike.. Quincidence? Hmmmmm.. Just browsing pattently apple, just look at some of their patents approved. It is obvious ishoes/iwearables are coming. After watching Cook's interview at All Things D, probably coming at this year's wwdc 2013. This should be an exciting week!

Wish we could see this new iPod Nano (probably not iPod Shuffle) product with touch screen and clip this coming fall. Can't wait!