Apple and Samsung Now at War over Securing Mobile DRAM

A new report surfacing today from Korea IT News states that Samsung Electronics is considering an option of using mobile DRAM from SK Hynix in its Galaxy S4. Samsung's Galaxy S4 may be the first smartphone model to sell than 100 million units, but as the demand for smartphones and pads has sharply increased, a red light is on for Samsung in procuring enough mobile DRAMs for the second half's production. The short supply of parts can deal a critical blow to the sales, and even Samsung was so concerned that it knocked on the doors of SK Hynix.That move is likely to spark a war between Apple and Samsung over securing Mobile DRAM.


For SK Hynix, having Samsung and Apple as its customers at the same time allows the chipmaker to have an upper hand in price negotiation. Apple is known to have reaped a profit close to $20 billion only with the NAND flash last year, while Hynix had to settle with very modest margin of 2 to 3%, trading with Apple. Apple made 7 to 10 times the profit out of the NAND flash alone.

For Samsung Electronics, the cooperation with Hynix is expected to be beneficial. The rise of memory price is going to put greater pressure on its rival, Apple, and contribute to the improvement of profit for its parts business division. Korea's IT News reported that the honeymoon period between Hynix and Samsung could sideline Apple. That's certainly a provocative view.

Last Thursday we posted a report about Samsung's goal of flooding the market with super cheap tablets over the next two years for the sake of claiming that they're the market share king. Well, in some ways it's worse than I thought. As you could see below, the Best Buy flyer delivered to my doorstep this week revealed that Samsung will be basically giving-away their unsalable Tab 2 tablet to move inventory. You buy their camera, you get a tablet. Giving away products for market share bragging rights is not only sad but oh so desperate. 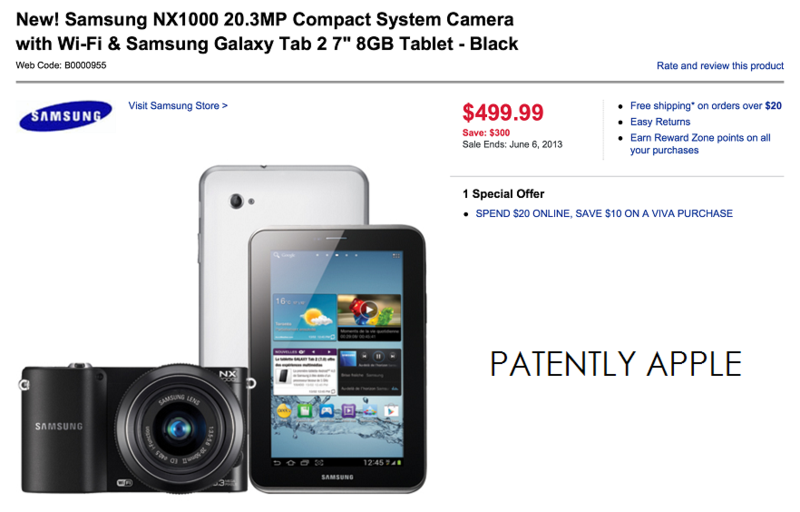 In our September 2012 report titled "Apple's Leadership and Magic Shine Through," we covered the iPhone 5 event. At the time, Apple's CEO Tim Cook reviewed some stats about the iPad. According to Cook, the iPad accounted for 91 percent of the web traffic of all the tablets at that time. Then he stated: "Now, I don't know what these other tablets are doing. They must be in warehouses or store shelves or maybe in somebody's bottom drawer!" That drew considerable laughter from the crowd. 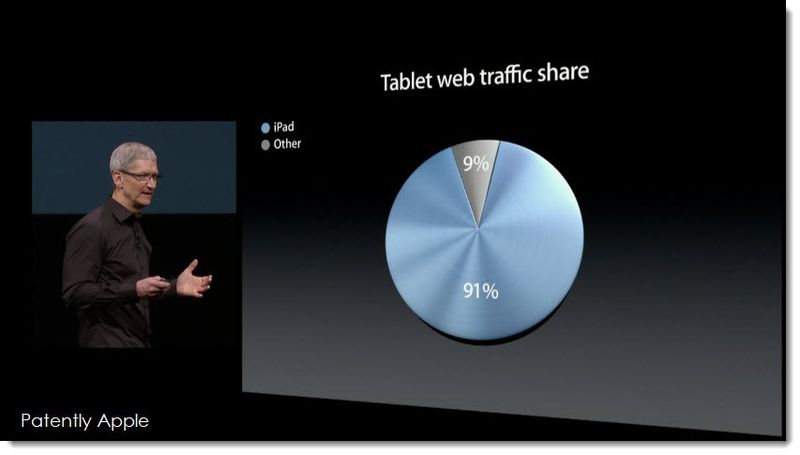 And with Samsung having to give their tablet away at Best Buy as I've illustrated above, it would appear that Tim Cook really hit the nail on the head. It would appear that the only way that we're going to be able to judge the real sales of iPads vs. Galaxy Tabs is through web traffic usage statistics. This will continue to show that Samsung tablets may have been sold to stores but that they're just sitting on shelves.

At the end of the day, if there's very little web traffic being accounting to Samsung tablets, it would strongly suggest that there's a lack of human interest in them. Last month it was recorded and reported that 81% of all web traffic for tablets came from iPads; the most appreciated tablets preferred by humans.

Then again, if they flood the market with free tablets, web traffic may actually increase for Samsung's tablets. But that's in-part based on free tablets. Anyone can do that and yet Wall Street and the mainstream press will lap it up as leadership. In reality, Samsung continues to be a joke trying to gain respect as a true innovator; something that even a well respected analyst that likes Samsung can't admit to yet. Being the greatest copycat in the world is about the best the analyst could come up with and on that note we can all agree.

If I were SK Hynix, I would not help Samsung in this case since Samsung is also a competitor to SK Hynix. I might keep negotiating with Samsung but would tell them NO at the last minute. SK Hynix needs a real customer and not a hybrid of customer and competitor.