With Apple Stuck in Sixth Spot in China, Apple needs to deliver their Brand of 'Shock and Awe' later this Year

According to the latest statistics published by China's Ministry of Industry and Information Technology, there were 1.155 billion subscribers of mobile communication services in China as of the end of April 2013. The breakdown records 288.74 million (25%) were 3G users and 807.65 million (69.92%) were mobile Internet-access users. Samsung took top spot in China in April with 18.8% while Apple took the sixth spot according to Hong Kong's Ming Pao Daily Newspaper quoting Sino Market Research results.


The research showed that China-based vendors Coolpad, Lenovo, Huawei Device and ZTE took second to fifth spots in April with market share figures of 11.5%, 11.2%, 10.1% and 6.4% respectively. Apple came in sixth with 5.4%.

China is also the largest market for smartphones as a whole, and the Asia-Pacific region will account for over 50% of smartphone shipments in 2013, added DisplaySearch.

A last note from DisplaySearch states that screen sizes are also changing with the market. In 2013, more than half (57%) of smartphone displays will range between 4- to 5-inch, while screens larger than 5-inch will grow to 16% of the market. That last stat may be underestimating the growth of displays in the 5.2 to 6 inch range as HTC, LG, Huawei and many others are going to be shipping units later this year. Then again, it'll probably take until 2014 for the stats to catch up with the sales of these next generation smartphones.

The astronomical rise in smartphones is due in-part to smartphones building in advanced camera features. Apple's latest panorama feature and those that debuted with Samsung's latest Galaxy S4 are pushing consumers to drop traditional purchases of digital cameras and opting for a smartphone. A new study quoted by Times of India indicates that 92% of consumers now prefer high-end smartphones to cameras.

The report states that "Smartphones are becoming the main camera of choice by a large number of people and increasingly more consumers are relying on their smartphones instead of compact digital cameras for both still photos and video capture." Traditional sales of digital cameras fell 25% in 2012. This has caused the likes of Sony, Canon, Nikon and others to deeply discount their cameras while increasing their ad campaigns to stimulate sales. Yet the trend is likely to only worsen going forward as smartphone designers like Apple and Samsung continue to advance camera quality, features and accompanying software.

Samsung, who sells standalone digital cameras, understands the trend better than the traditional camera pioneers and are planning to introduce a new higher-end smartphone-camera hybrid later in June. The announcement for the event was just issued as illustrated below. 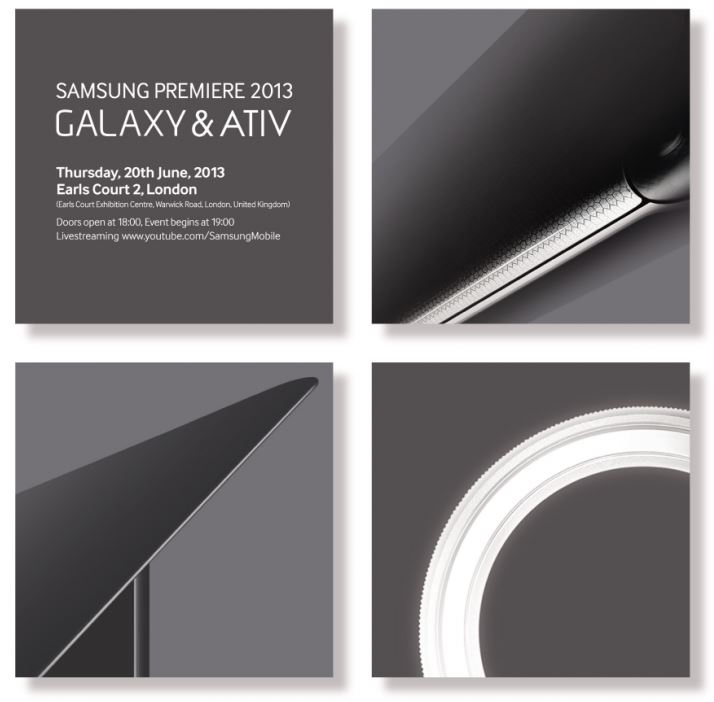 The bottom right image of Samsung's event notice relates to a hybrid camera design that our Patent Bolt site covered earlier this month. Note the edges of the camera lens in the graphic above and compare them to their design patent to see the connection.

As a fierce competitor, Samsung timed their event ten days after Apple's WWDC that kicks off on June tenth. At this time, we have no idea if Apple will provide us with a peek at next generation iPhone camera features and/or a mid-level iPhone to tap into the emerging markets. But if Apple wants to advance their market position in China where they're currently stuck in the sixth place, something dramatic has to emerge.

Apple's CEO Tim Cook stated during last month's financial conference call that sales in China were at $8.8 billion, up 11% year over year. He added that Apple will be doubling the number of Apple Stores in China over the next two years. In March we pointed to Apple tripling their footprint in India by 2015 and late yesterday we reported that Apple's first store in Turkey is set to open in the coming months. Apple's actions speak loudly for themselves. They're clearly preparing to attack emerging markets and a mid-level iPhone that we pointed to as early as January of this year is likely the way to punch through to this market segment.

At the end of the day, it's a mystery as to what Apple is planning to unveil in June or September on the smartphone front. Yet it's safe to say that Apple has to deliver their brand of "Shock and Awe" at some point in time this year so as to shake things up, power up their base and make a dent in the emerging markets.