The National Cheng Kung University in Taiwan sued Apple in 2012 claiming that Siri used on iDevices allegedly infringed on their patents. The University has now filed a second patent infringement lawsuit against Apple claiming that all of Apple's products using block-orientated motion compensation video compression as embodied in the ITU-T H.264 Standard, including Apple FaceTime and Apple QuickTime, allegedly infringes on their 2009 patent.


The patent in question is that of granted patent 7,561,078 entitled "System and Method for Encoding a Data Set." 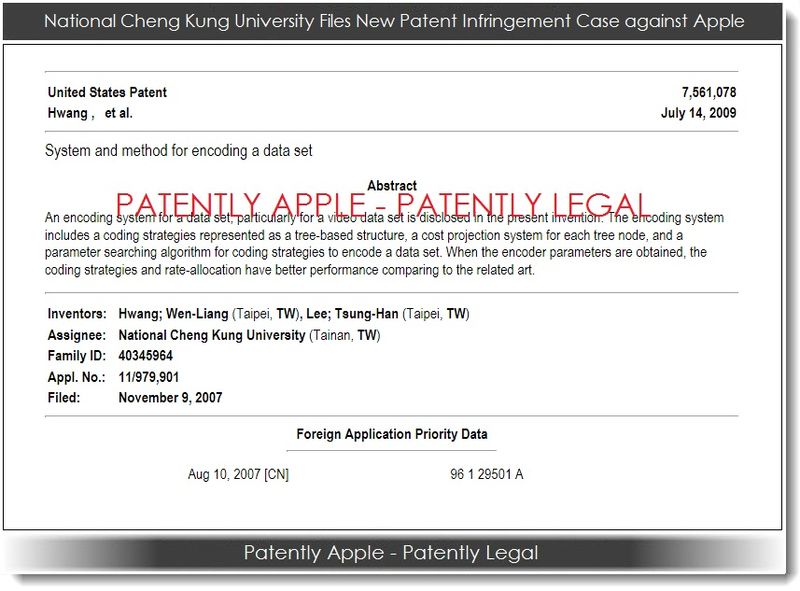 The complaint adds that "To the extent that facts learned in discovery show that Apple's infringement of the '078 Patent is or has been willful," which in legal terms is requesting that the damages be tripled if Apple is found guilty of patent infringement.

This is a little confusing considering that Apple is using H.264, an approved International Telecommunication Union (ITU) standard that is also used by Adobe, Google's YouTube, Microsoft Silverlight, Vimeo and more. Why the University is singling out Apple isn't clarified in their formal complaint before the court.

Is this Patent part of MPEG-LA? Is there a grant back license stipulation? So there hasn't been official discovery yet, just speculation by the professors and University. Maybe the professors get a raise if they win the lawsuit? Eastern Texas sounds familar for patent trolls.

Maybe all ITU/ISO standards organizations should require every patent declared a standard/SEP to be subjected to patent pools like MPEG-LA?