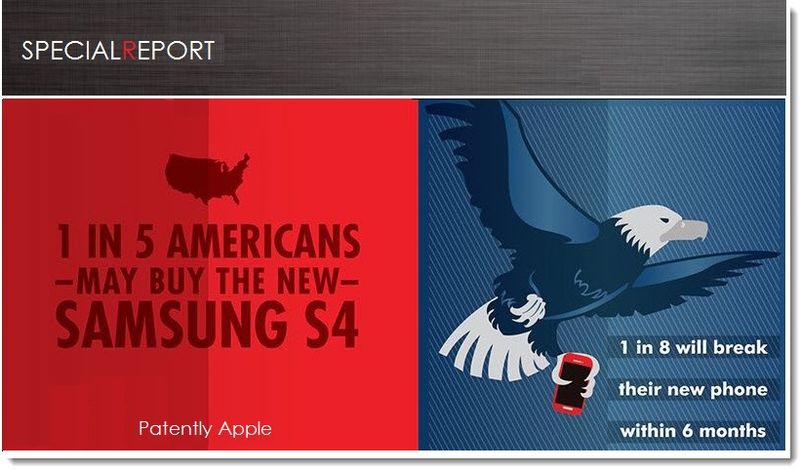 A leading protection plan company serving millions of customers in the US and Britain announced their latest "Breakability Score" which ranks today's top devices based on how prone they are to break due to accidents. Evaluating key elements such as front and back panel design, edge construction and materials, size, weight, friction quotient, water resistance and grip-ability, the Breakability Score fills in the missing gap left by traditional device reviews: it tests devices in everyday danger situations brought on by our lifestyles and habits. The latest Breakability Test Scores between the Galaxy S4 and the iPhone 5 showed that the S4 was the clear loser.


Ty Shay, CMO at SquareTrade states that their Breakability Score creates a new "Richter Scale" for accidental damage to help consumers assess when, where and how their phones are in danger. "It's been two years since we created the first Drop Test video for the industry and we thought it was time to expand the concept," Shay added.

Comparing the Samsung Galaxy S4 to the S3 and Apple's iPhone5, the iPhone 5 was the clear winner. SquareTrade's Breakability Score revealed the following:

1. While the S4 proved slightly more water resistant than its predecessor the S3, Samsung's new Galaxy phone actually performed worse in most other categories. Major strikes against the S4 include high breakability during SquareTrade Drop Tests, a slippery back panel, and a wider screen that reduces grip-ability, especially compared to the ultra-slim iPhone 5. Breakability Score: 7

2. While the Samsung S3 screen is more durable, it is less water resistant than the S4 and its plastic back and wide width decreases its grip-ability. Breakability score: 6.5

3. The iPhone 5 scored the highest of the three phones tested. While it lost points for its larger size due to more breakable surface area, its excellent grip-ability and low friction coefficient make it far more durable overall. Breakability Score: 5

Shay added that their "research and experience shows that even the smallest device characteristics can dramatically affect its breakability: the weight balance of a device can affect the way it spins in free-fall, making it more likely to land on its screen; devices with rubber backs are less likely to slide, and that device dimensions can affect how snugly smartphones fit in pant and jean pockets. 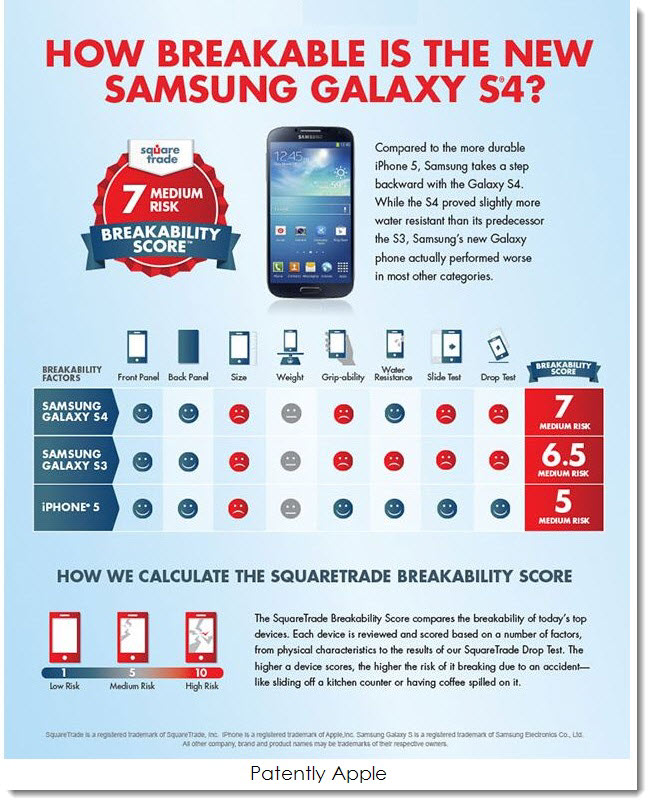 While Apple's iPhone was shown to be the clear winner in SquareTrade's Breakability Score, we noted back in March that Apple was working on adding protective mechanisms to protect future iDevices.

One of the protective measures could include a mechanism that may be activated to rotate an iDevice so that it may impact a surface edge rather than on a screen portion. Similarly, the protective mechanism may alter the device orientation by altering the angular momentum of the device. Several other major considerations are being contemplated to further protect iDevices from suffering damage in a fall and you could read all about them here.

The bottom line is that Samsung's rush to beat Apple to the 5" smartphone display size market was done in haste without thought for the consumer. That's not to say that a 5" display is a bad idea, but rather that the industrial design team at Samsung failed to design it right so that damages could be avoided due to the larger display.

According to yet another SquareTrade report released in April, 1 in 5 Americans may buy the Samsung S4 and that 1 in 8 will break within the first 6 months.

Their second study also found that Americans have spent more than $7.2B on damaged Android phones including Samsung, Motorola, LG and HTC since 2007, and $3.7B on Samsung's alone. It also showed that 20% more Android users over iPhone users dished out more money to protect their devices from accidents. 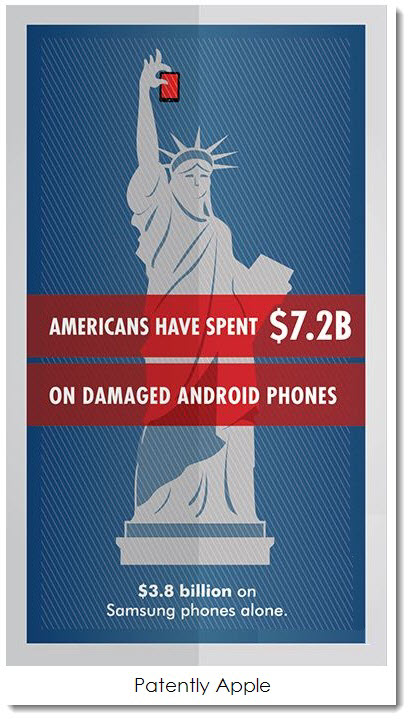 You could also see one of their Galaxy 4S vs iPhone 5 Drop Test videos here, which happens to also demonstrate a water submersion test. I was surprised to see the iPhone 5 functioning under water and being able to play after being in the water. You would think that Apple would play-up the waterproofing feature of the iPhone 5 as it was news to most viewing this video. However, like an old ad use to say "don't try this at home."

The only major problem with iPhone 5 is that it get scuffed, but it isn't visible on a white iPhone. I hope Apple would improve the anodising in the future. Aluminium oxide (which is a thin layer over aluminium) is as hard as the hardest steel alloy.