In the three years since Apple's iPad became the first modern web tablet available in the US, the tablet market has continued a steady growth. Tablets have worked themselves into both our daily and workplace lives, and the iPad in particular remains the king of this personal computer segment. New stats that were just released by Chitika, actually shows the iPad with a slight increase in April's web traffic over their competitors.


To determine the distribution of Web usage among leading tablet devices for the month of April 2013, Chitika Insights sampled tens of millions of U.S. and Canadian tablet ad impressions running through the Chitika Ad Network. The data used to compile current market share was drawn across the time range of April 15th to April 21st, 2013. The historical data in the charts below is drawn from the Chitika Insights February and March tablet market share reports. 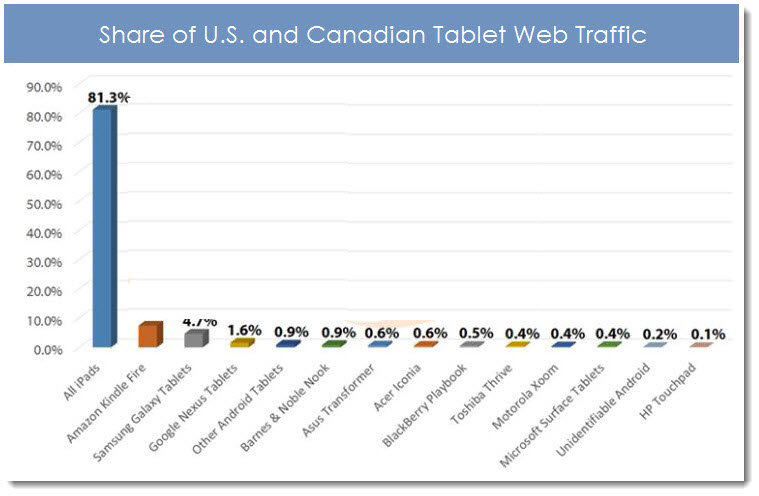 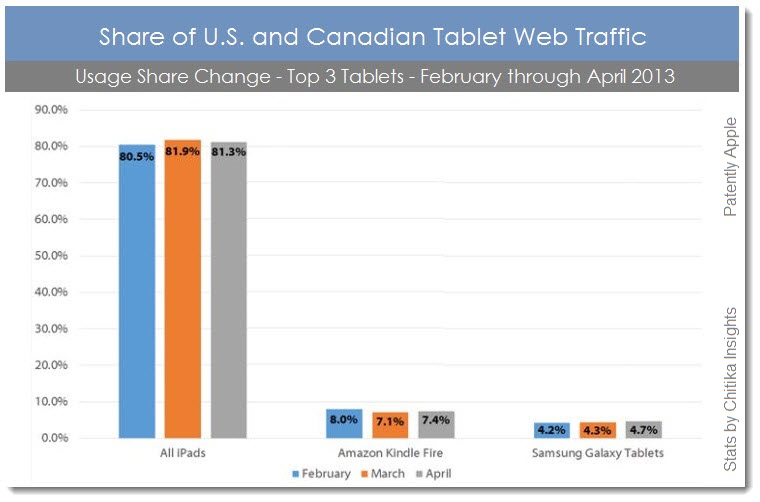 According to Chitika Insights stats, Apple's iPad has shown little fluctuation in web traffic volume so far this year, claiming 81.3% of tablet web traffic in April, up slightly from 81.0% in January. The stats show that Samsung's Galaxy grew from 3.9% to 4.7% even though they introduced new tablets. They just can't seem to gain any momentum against Apple's iPad. Chitika frames Samsung's anemic growth as "making strides." I call it pathetic, considering all the press that Samsung undeservingly garners.

New Stats on the SmartPhone between the iPhone's iOS vs. Android

The web traffic trend noted above would appear to continue through to smartphones to a certain degree.

Smartphone users may constantly debate which operating system is supreme, but Experian Marketing Services clearly sees differences between the ways consumers use their smartphone depending on the operating system that runs it. For starters, Apple's iPhone users spend an hour and fifteen minutes using their phones per day, a full 26 minutes more than the typical Android phone owner.

Additionally, iPhone and Android smartphone owners use their phones in markedly different ways. For instance, 28% of the time that Android users spend using their phones is dedicated to talking, whereas iPhone users spend only 22% of their smartphone time talking on the device. Android owners also devote a greater share of time visiting websites on their phone than iPhone owners. On the other hand, iPhone owners spend a disproportionately greater share of smartphone time than Android owner's texting, emailing, using the camera and social networking. 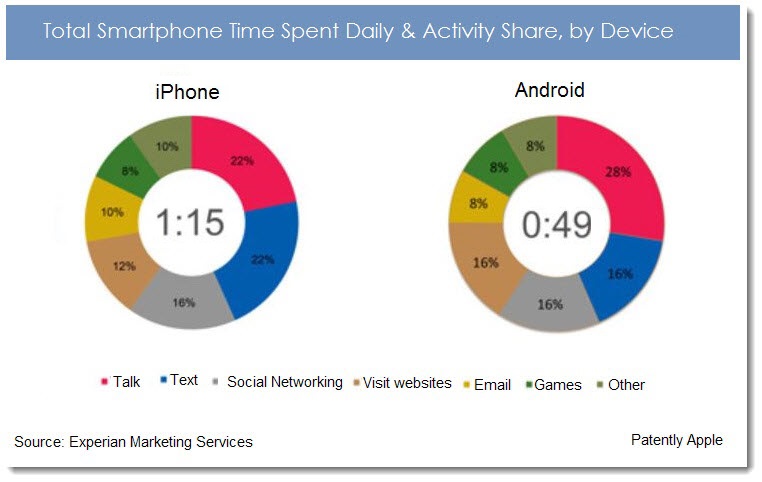 If you're interested in the iPhone stats, there are more to be found in the Experian Marketing Services report. At the end of the day, the average iDevice user is making better use of their iPads and iPhones than those with Android devices. This was a point that Apple's CEO Tim Cook made last night during his interview with Walt Mossberg and Kara Swisher at the AllThingsD D11 Conference.