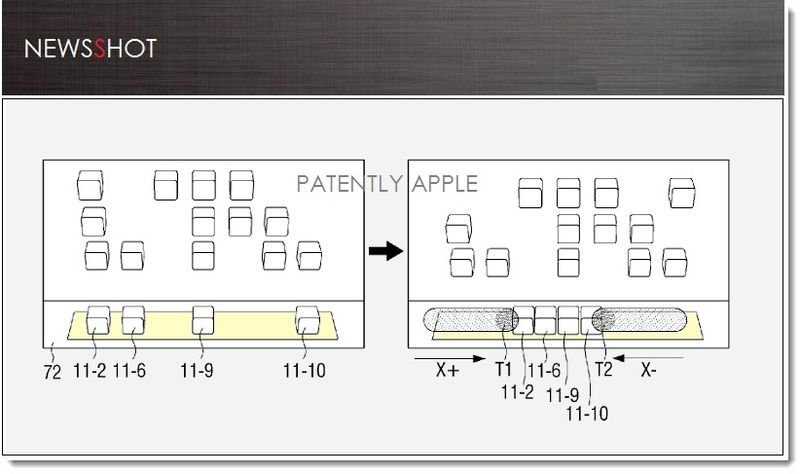 Samsung is at it again. Within a new patent application published by the US Patent Office today, Samsung is found presenting some new user interface ideas for their touch display devices covering page turning effects and a new screen-unlock feature. Yet one of their so-called new ideas is one "borrowed" from Apple. It's the iOS app-dock that's like a glass shelf reserved for your most used/favorite apps. Samsung's patent figure is illustrated in our cover graphic above. Samsung's oh-so creative engineers just couldn't resist borrowing yet another Apple user interface element. 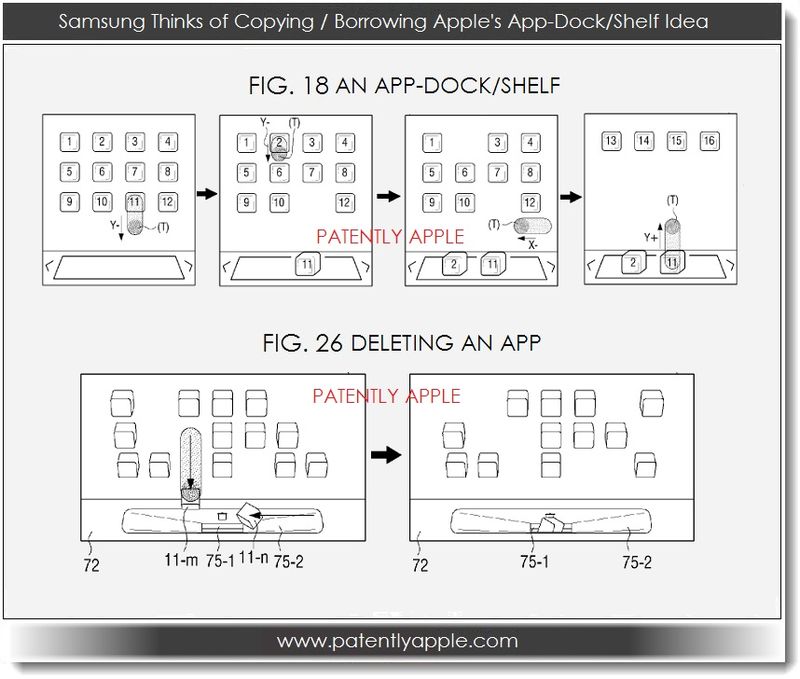 Of course in an effort to appear a little original, Samsung has added a twist to their app dock area noted above in patent FIG. 26. With just a press of a button, the "dock" area turns into a unique garbage disposal system which they boringly refer to as the "deleting area." This area may include a hole (shown as #75-1) to delete an icon. In delete mode, the icons on the display will slightly tilt forward. Then the user is able to flick the icons down to the garbage disposal area which will eventually get swallowed up.

Today, a user's favorite icons are presented in the Galaxy user interface simple as a row of apps amongst many rows with no distinction between them. You could see Apple's app-doc versus the Samsung Galaxy and HTC One user interfaces here to see the difference it makes using an app-doc.

However, in the end, it may not matter much, as Apple is supposedly getting away from using 2D/3D user interface elements. According to rumors, Apple's VP of Industrial Design Jony Ive is pushing for a complete revamp of the iOS interface to carry a much flatter user interface design.

For now, it's just fun to poke at another idea that Samsung is borrowing from Apple. It's just baffling why Samsung's engineers go out of their way to copy Apple, as if it's part of their DNA. They take monkey-see monkey-do to a whole new level.

Whether Samsung is thinking of adopting the app-dock user interface idea for their upcoming Tizen OS or for a modified version of Android is unknown at this time.

Samsung's patent was published today by the US Patent and Trademark Office. It was originally filed in the US under serial number 665598 in Q4 2012.

Samsung is like an AI bot: it is constantly learning from the (sluggish) US patent system what it can get away with as it identifies risk/reward scenarios between damages payouts versus profits + market share it can accrue as justice drags its heels. I would expect to see the other android operators to begin changing from a position of restraint to also becoming far more overt in their copying, as a result.

And then Samsung has the nerve to run this pathetic anti-Apple campaign in the media, comment sections, and their advertising. If it wasn't for Apple, what would these guys be? Sad thing is, Samsung ACTUALLY considers this sort of stuff "innovation," when they add just one simple tweak to Apples designs.

Samsung is the biggest wannabe I've ever seen. Idk, they definitely take the cake from MS in their heyday. I don't think MS was EVER as shameless as Samsung.