Home Archives Contact Us Subscribe Twitter MeWe Facebook Patently Mobile
High-End Gaming Coming to Firefox Browsers & the iPhone is as Addictive as Cocaine for some
The European Commission: Motorola/Google Misusing Patents against Apple to the Detriment of Innovation

Samsung doesn't like the trend that's putting Apple's iPhone back on top last quarter and so their marketing attack dogs thought it was time for another Galaxy vs. iPhone ad. The trouble with their ad is that it could be shooting themselves in the foot. Making executives look stupid for the sake of gaining jobless grads is a dumb idea. But hey, this is Samsung who thought that the ditsy housewife stereotype was their target market last quarter. The only ditsy ones here appear to be Samsung's own marketing team.

According to comScore, 136.7 million people in the U.S. owned smartphones (58 percent mobile market penetration) during the three months ending in March, up 9 percent since December. Apple ranked as the top OEM with 39 percent of U.S. smartphone subscribers (up 2.7 percentage points from December). Samsung ranked second with 21.7 percent market share (up 0.7 percentage points).

Apple's Success Triggers Samsung to Go on the Attack

The uptrend favoring Apple wasn't supposed to happen according to Samsung's game plan and so it was time to go on the offensive once again. They weren't out to sell the new Galaxy S4's gimmicky features on their own merits, but rather to try another ad about hip Samsung vs. old Apple. It's about pinning one generation against another. Yawn.

Samsung's ad shot for "feature bling" in the hope of capturing the market's imagination into believing that waving their hand over their smartphone instead of pressing a single button is the next great thing in smartphones.

Yet it's Samsung's continuing confusion over who their core market is that's the funniest. Is it the ditsy boozing 1960's styled housewife, the dumb executive or the recent grad? 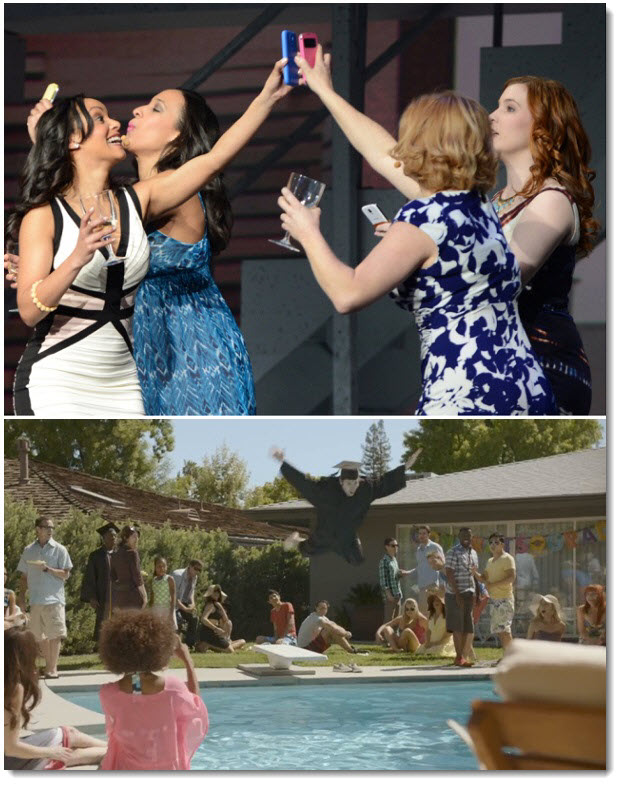 It's confusing because the "dumb parents" are usually those working in the enterprise market today. Are these parents who own a home with a pool really that stupid? When Samsung goes over the line and makes executives look like buffoons, is that really a smart marketing message?

To make it crystal clear that the adult executive is really dumb compared to their savvy child with no job yet, the new grad gets his Dad to smell a photo on his Samsung: "I'm taking a picture of these ribs with my New GS4. Have a smell" And the dumb trusting Dad who owns an iPhone actually falls for it. 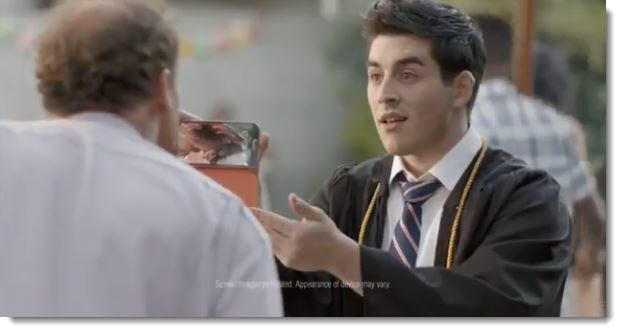 So remember the message here: if you're an executive working hard to put your kids through University you must be a dumb iPhone user who just can't smell Samsung's Smell-O-Rama Baloney for what it is. And lord, you better run out and chase the greatest new craze of swiping your hand in mid-air to answer your phone. I'm sure it's the next big thing that all execs must have to be productive.

I own 4 iPhones and use to own an android phone..
It was pretty shit cause it was a cheap $80 phone that had a crappy processor but yeah
You could say I'm an "apple fan boy" but really... I want a galaxy s even though I love iPhones.

Oh Yeah. Samsung think iPhone users are dumb and yet Apple cracked the top 10 Fortune 500 List. I guess we have more dumb people in this world than smart people. Samdung should be ashamed of themselves.

However your comments about "cool people" for the Galaxy and "older folks" for the iPhone. This is Samsung's opinion and not factual. Go to an Apple Store and just observe who's in the store. 80% are young people. This is just a Samsung pipe dream created by their marketing team. You're obviously gullible.

About the parents being associated with the enterprise. The parents own a house with a pool and just put their kids through University. I doubt that they're working for minimum wage. You're not very observant.

About the approval from the Pentagon, I guess you missed the news:

Thanks for your comments Andre, seriously, but I couldn't disagree with you more.

Hi Jack, I'm a huge fan of your blog and respect the work you've done over the years to promote Apple patents. However, I have to disagree with you here. I believe is this kind of attitude towards Samsung has gotten Apple in a spot of bother with declining stock price. I'm sure this would recover in time.

I agree with the comment from S above - this ad is actually very good from Samsung. It depicts cool people using the Galaxy S and older folks using the 'boring' iPhone.

I'm not sure why you are associating a bunch of older folks with enterprise.

And the last time I checked, Samsung's Galaxy phones got Pentagon's approval, while Apple is still waiting. This makes the Galaxy more enterprise ready at the moment.

Who would buy a crappy piece of plastic with a super crappy display that can't accurately present colors? Samdung fans, that's who. Thumbs up to the iPhone and Apple's iTunes and great App Store.

Iphone users are dumb because they have an inferior product.

Exactly. I own an iPhone 5 because I can afford to and because it always works. I'm also not stupid.

Why would I want to buy a phone from a company that thinks I am stupid?

I thought, Samsung ad was really good, this time...