Home Archives Contact Us Subscribe Twitter MeWe Facebook Patently Mobile
Apple Invents a Wild New Display that could conceal a Camera, Strobe Flash and/or Fingerprint Scanner until Needed
How will Samsung Win against the iPad? By Flooding the Market with Super Cheap Tablets over the Next Two Years

Smartflash has filed a patent infringement lawsuit against Apple. The patent infringement lawsuit basically concerns Apple's iTunes Store, the App Store, Apple TV, iOS and much more. A number of gaming developers are a part of this suit for using Apple's iTunes Store to sell their wares. Smartflash is claiming that Apple has allegedly infringed on their six standing patents which all relate to "Data Storage and Access Systems."

As part of Smartflash's infringement lawsuit filing before the court they present their "Factual Allegations" against Apple as follows:

The patents-in-suit generally cover a portable data carrier for storing data and managing access to the data via payment information and/or use status rules. The patents-in-suit also generally cover a computer network (i.e., a server network) that serves data and manages access to data by, for example, validating payment information.

iTunes is an Apple application that supports the purchase, download, organization and playback of digital audio and video files and is available for both Mac and Windows-based computers.

iTunes Store is an Apple service that allows customers to discover, purchase, rent, and download applications and other digital content.

iTunes is integrated with the iTunes Store.

Apple sells and delivers digital content and applications through the iTunes Store, which includes Apple's App Store and iBookstore.

The Mac App Store is an Apple service that allows Apple's customers to purchase, download and install Mac applications.

Apple's end-user customers can use the App Store app on their portable Apple devices, such as the iPhone, iPad, iPad Mini and iPad Touch, to purchase and download digital content and applications.

Apple's Store Kit connects to the App Store on behalf of an application to securely process payments from the user.

An application developer or publisher can use Apple's iAd advertising platform to deliver ads to users.

Apple sells the ads through its iAd advertising platform and serves such ads to iAd enabled apps.

Apple provides its iAd advertising platform through its iOS SDK. 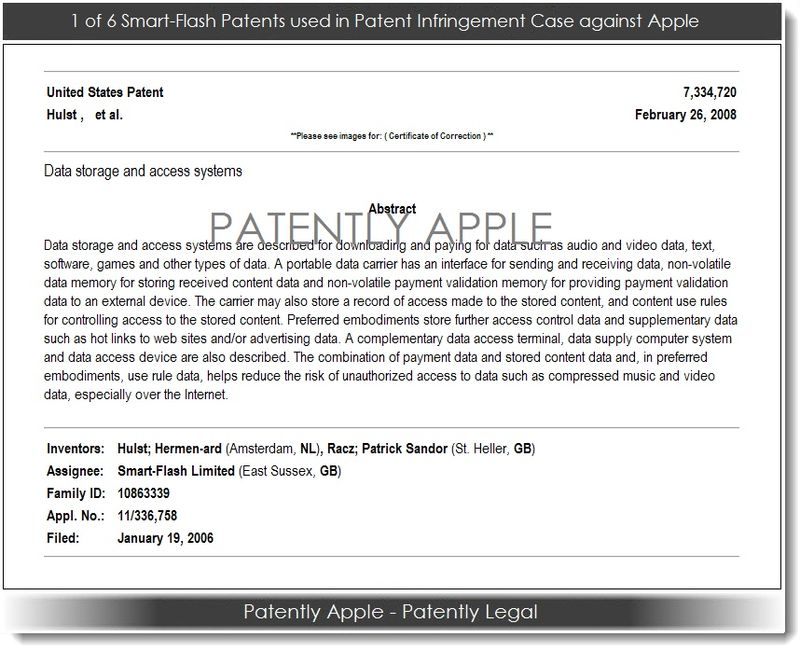 One of the remedies that Smartflash is asking the court for specifically states: "A judgment that Apple's infringement of the patents-in-suit has been willful." That's legalese for – we want Apple to pay us triple damages if they're found to be guilty.