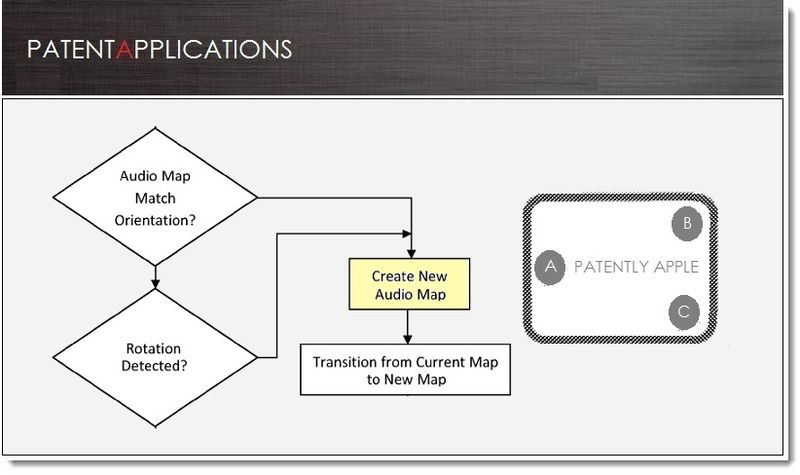 On May 23, 2013, the US Patent & Trademark Office published a patent application from Apple that reveals an all-new intelligent audio system that is coming to future iDevices that will be based on a device's orientation rather than depending on its fixed speakers. Depending on the way the user is holding their iDevice and which content they're enjoying, Apple's new audio processing router will ensure that the very best audio output configuration is chosen using its intelligent audio mapping system.

Apple states that many modern portable electronic devices may be turned by a user to re-orient information displayed on a screen of the device. As one example, some people prefer to read documents in a portrait mode while others prefer to read documents shown in a landscape format. As yet another example, many users will turn an electronic device on its side while watching widescreen video to increase the effective display size of the video.

Many current electronic devices, even when re-oriented in this fashion, continue to output audio as if the device is in a default orientation. That is, left channel audio may be omitted from the same speaker(s) regardless of whether or not the device is turned or otherwise re-oriented; the same is true for right channel audio and other audio channels.

Generally, the embodiments described in Apple's invention take the form of devices and methods for matching an audio output to an orientation of a device providing the audio output. For example, as a device is rotated, audio may be routed to device speakers in accordance with the video orientation. To elaborate, consider a portable device having two speakers, as shown in FIG. 1. When the device is in the position depicted in FIG. 1, left channel audio from an audiovisual source may be routed to speaker A 110. Likewise, right channel audio from the source may be routed to speaker B 120. "Left channel audio" and "right channel audio" generally refer to audio intended to be played from a left output or right output as encoded in an audiovisual or audio source, such as a movie, television show or song (all of which may be digitally encoded and stored on a digital storage medium, as discussed in more detail below). 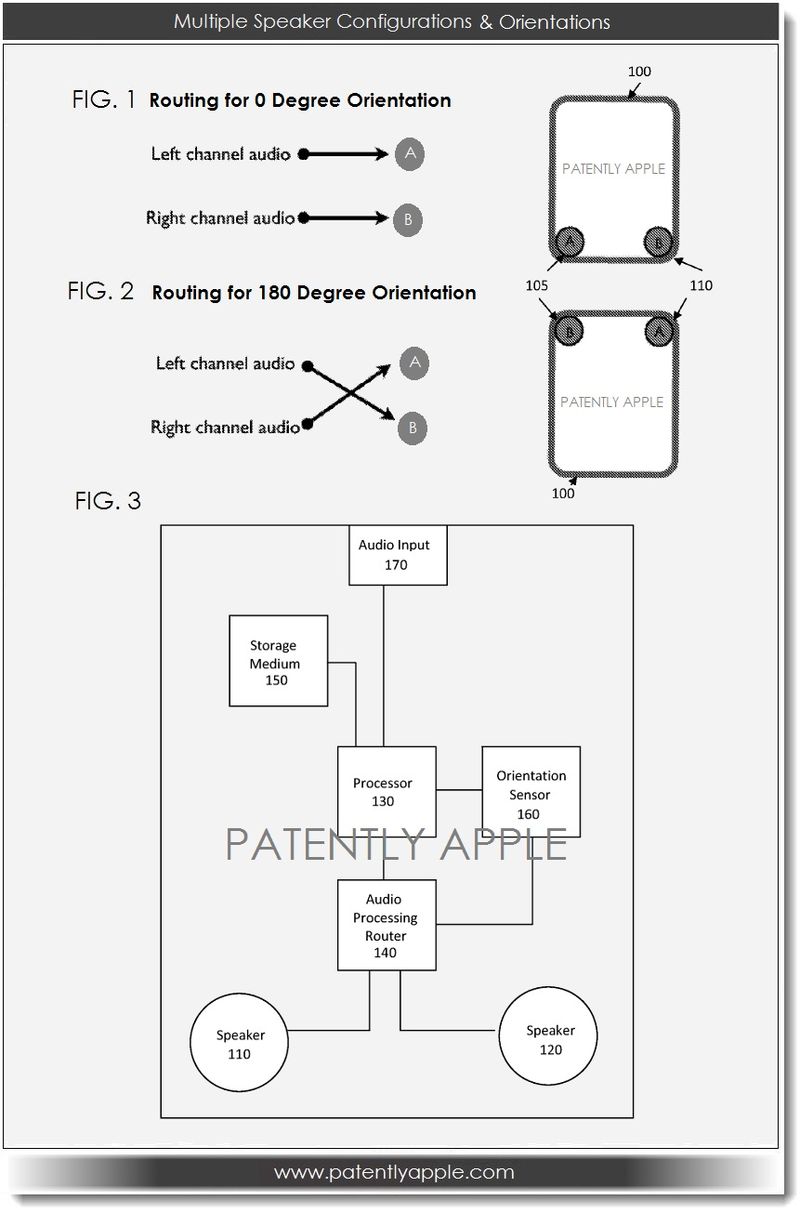 It should be appreciated that certain embodiments may have more than two speakers, or may have two speakers positioned in different locations than those shown in FIGS. 1 and 2. The general concepts and embodiments disclosed herein nonetheless may be applicable to devices having different speaker layouts and/or numbers.

Apple adds that audio may be inputted to the device through an audio input 170 or may be stored on the storage medium as a digital file. Audio may be inputted or stored alone, as part of audiovisual content (e.g., movies, television shows, presentations and the like), or as part of a data file or structure (such as a video game or other digital file incorporating audio). The audio may be formatted for any number of channels and/or subchannels, such as 5.1 audio, 7.1 audio, stereo and the like. Similarly, the audio may be encoded or processed in any industry-standard fashion, including any of the various processing techniques associated with DOLBY Laboratories, THX, and the like.

The audio processing router initially may receive audio and determine the audio format, including the number of channels. As part of its input signal processing operations, the audio processing router may map the various channels to a default speaker configuration, thereby producing a default audio map. For example, presume an audio source is a 5.1 source, as discussed above. If the electronic device 100 has two speakers 110, 120 as shown in patent FIG. 3, the audio processing router may determine that the left front and left rear audio channels will be outputted from speaker A 110, while the right front and right rear audio channels will be outputted from speaker B 120. The center channel may be played from both speakers, optionally with a gain applied to one or both speaker outputs. Mapping a number of audio channels to a smaller number of speakers may be referred to herein as "downmixing."

Apple states that as the electronic device is rotated or re-oriented, the sensor 160 may detect these motions and produce a sensed motion or sensed orientation signal. This signal may indicate to the audio processing router and/or the processor the current orientation of the electronic device, and thus the current position of the speakers 110, 120.

In Apple's patent FIGS. 5-8, the iPad (electronic device) may have multiple speakers, such as three speakers (shown in FIGS. 5-8) or more. 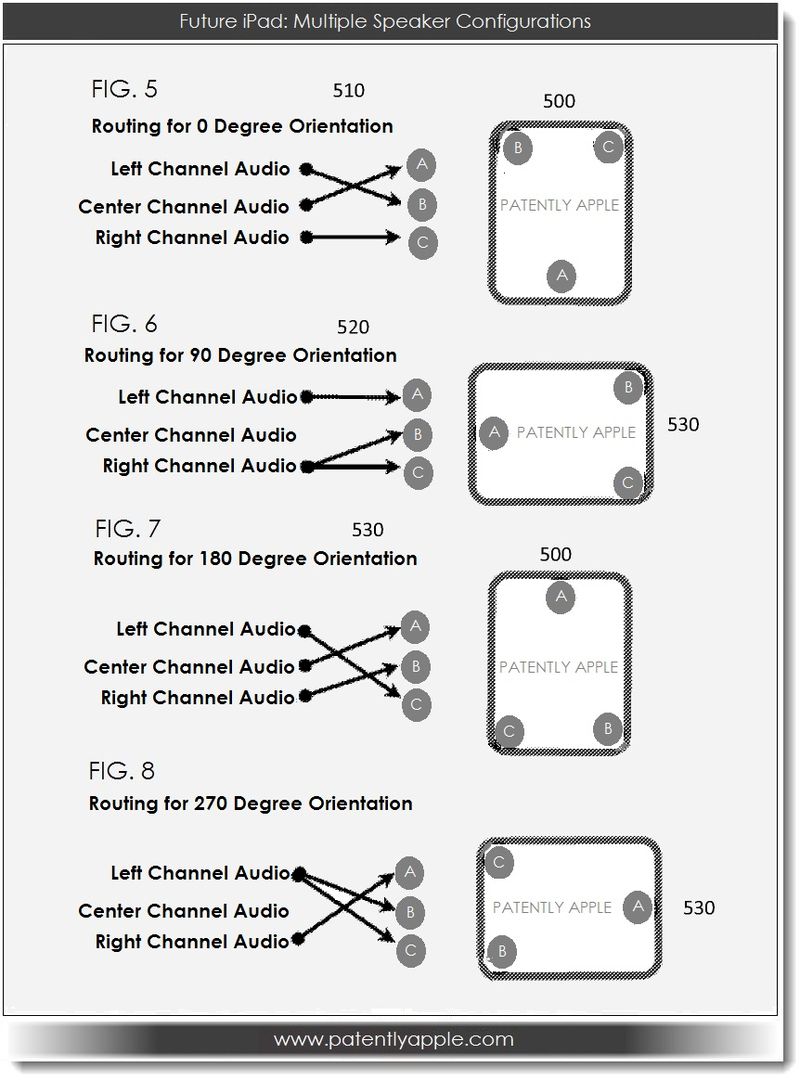 Apple credits Martin Johnston, Ruchi Goel and Darby Hadley as the inventors of patent application 20130129122, which was originally filed in Q4 2011. It should be noted that our patent report is based on Apple's "Detailed Description" segment of their patent application. See the patent application to review Apple's patent claims. Considering that this is a patent application, the timing to market of such an Apple product is unknown at this time.