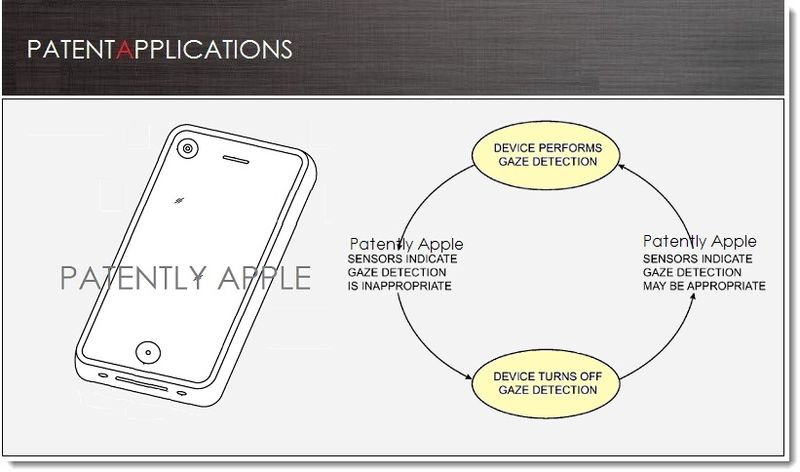 On May 30, 2013, the US Patent & Trademark Office published a patent application from Apple that reveals Apple's gaze detection technology. It should be noted that Apple's current patent is a divisional patent which means that Apple is breaking this aspect of their 2008 parent patent out as an individual patent. Technically, Apple had this technology in a patent prior to any other competitor including Samsung which actually implemented it first in their Galaxy S4 smartphone earlier this year. Apple also added gaze technologies to a January patent in context to an HDTV related patent and the likes of Sony and BlackBerry are working on similar features. Today, when you put your iPhone to your face the display is turned off. This is one of the technologies found in Apple's gaze detection patent. In the future, gaze technology will be able to stop a video when you look away or stop your tunes from playing based on this gaze detection feature. At the end of the day, Apple's gaze detection technology is really more about conserving power than it is about providing a flashy gimmick.

Unfortunately, conventional power conservation techniques may turn off display screens at inappropriate times, thereby interfering with a user's ability to interact with a device. Conventional techniques may also leave display screens on at inappropriate times, wasting valuable battery power. It would therefore be desirable to be able to provide improved ways in which to conserve power in electronic devices.

Apple's invention generally relates to computer devices that will have built-in gaze detection capabilities. The invention could apply to MacBooks, iDevices, Ultraportables and wearable computers pendants, a wrist and/or other miniature devices. 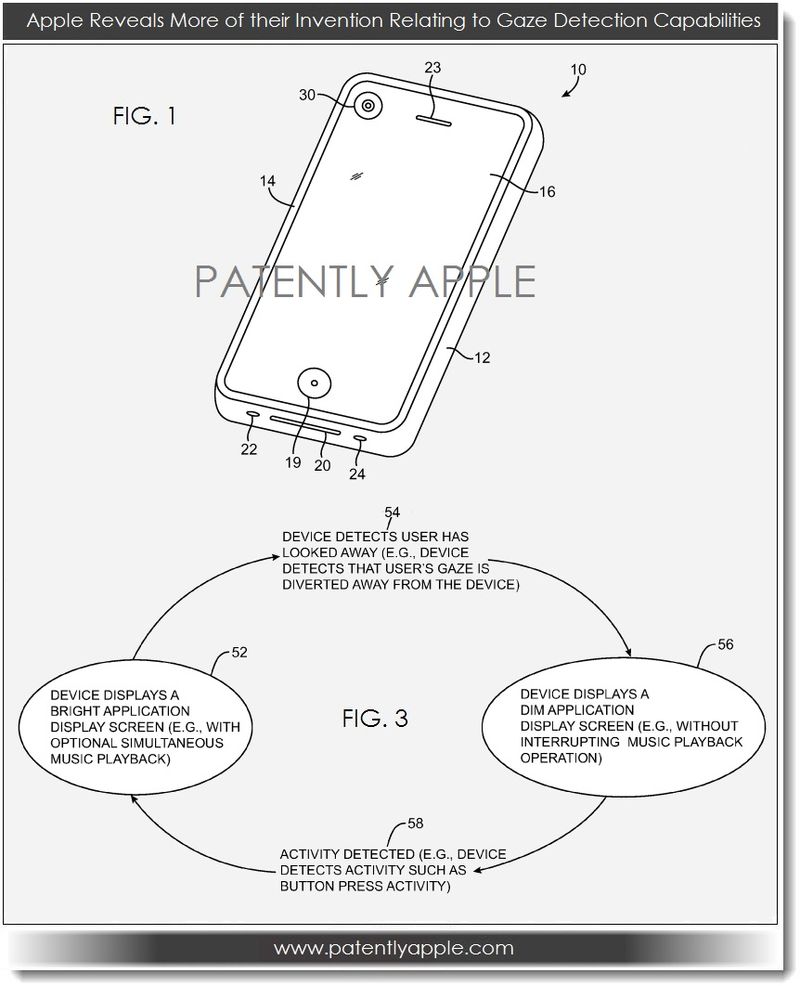 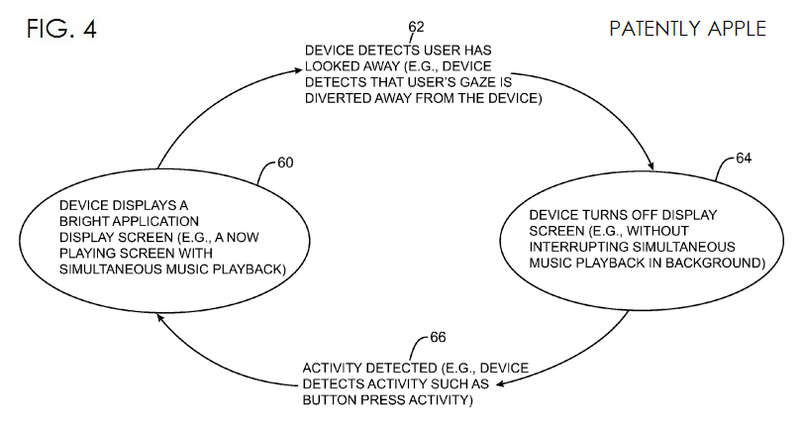 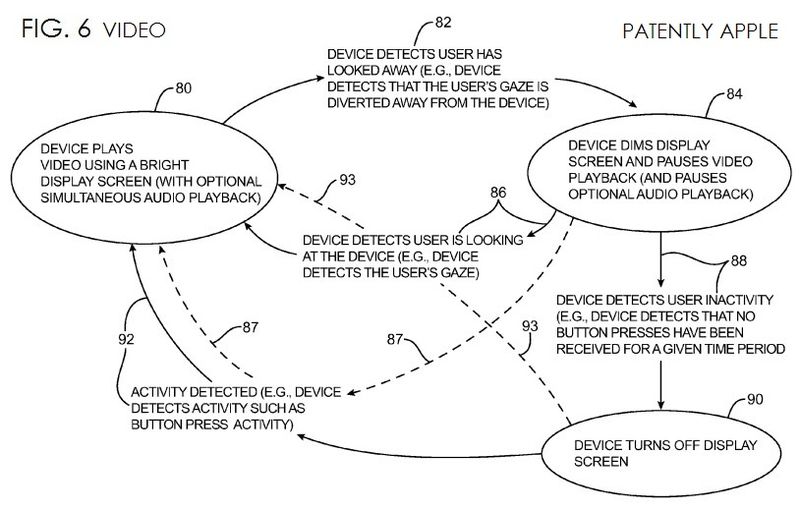 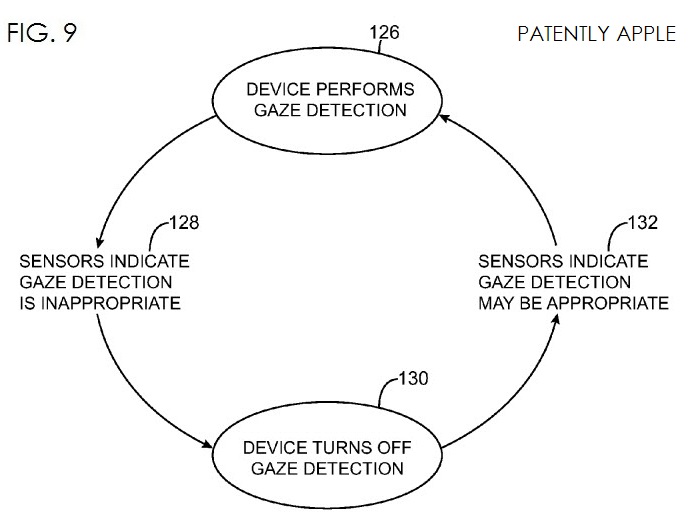 In that example, a device may switch to another mode when the accelerometer detects that the acceleration of the device exceeds a given threshold level. In another example, the device may be able to detect, using a proximity sensor, that gaze detection operations are inappropriate because an object is in close proximity to a device and is blocking the device's gaze detection sensors (e.g., such as when a user places a device against their ear and thereby blocks the camera. If desired, a device may suspend gaze detection operations when an ambient light sensor detects that there is insufficient light in the environment around a device for a camera to capture images in which a user's gaze could be detected.

Apple's patent FIG. 10 shows steps involved in processing a command to reduce the power consumption of the display. Power reduction commands may be processed by a device based on gaze detection data or any other suitable data. 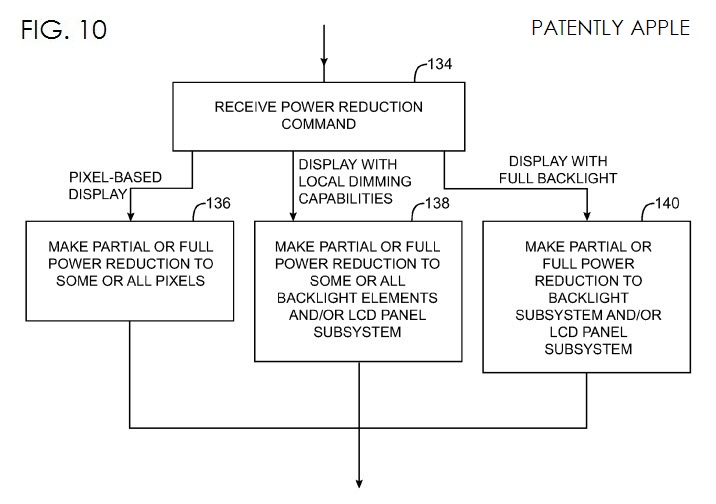