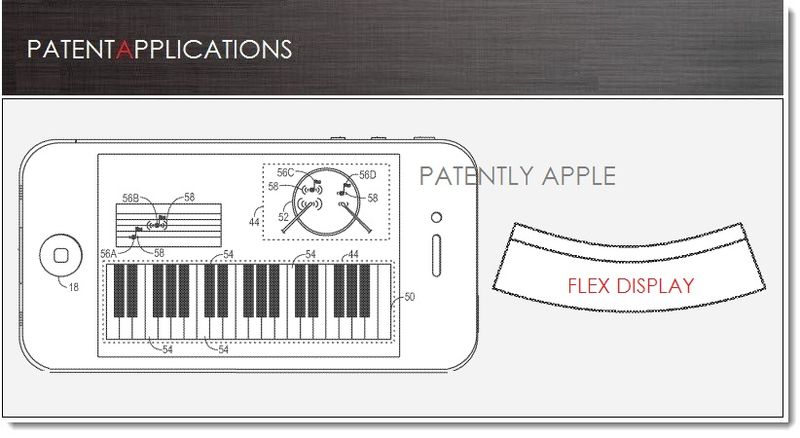 On May 30, 2013, the US Patent & Trademark Office published a patent application from Apple that reveals a new flexible display invention. Apple has filed a number of flex display based patents over the last year including one for advanced concepts and features, another relating to the a next generation Smart Cover and yet another relating to unique functionality beyond the gimmickry of flex screen designs. Today's patent extends on the latter patent in that it ties a flex screen directly to an application such as Apple's GarageBand. In the future, playing the piano will be more realistic allowing the user to press the keys harder or softer to get the right sound that they're seeking. I'm sure that Apple is working on other applications for this new functionality but we'll just have to wait until they roll it out to see just how cool this could be. 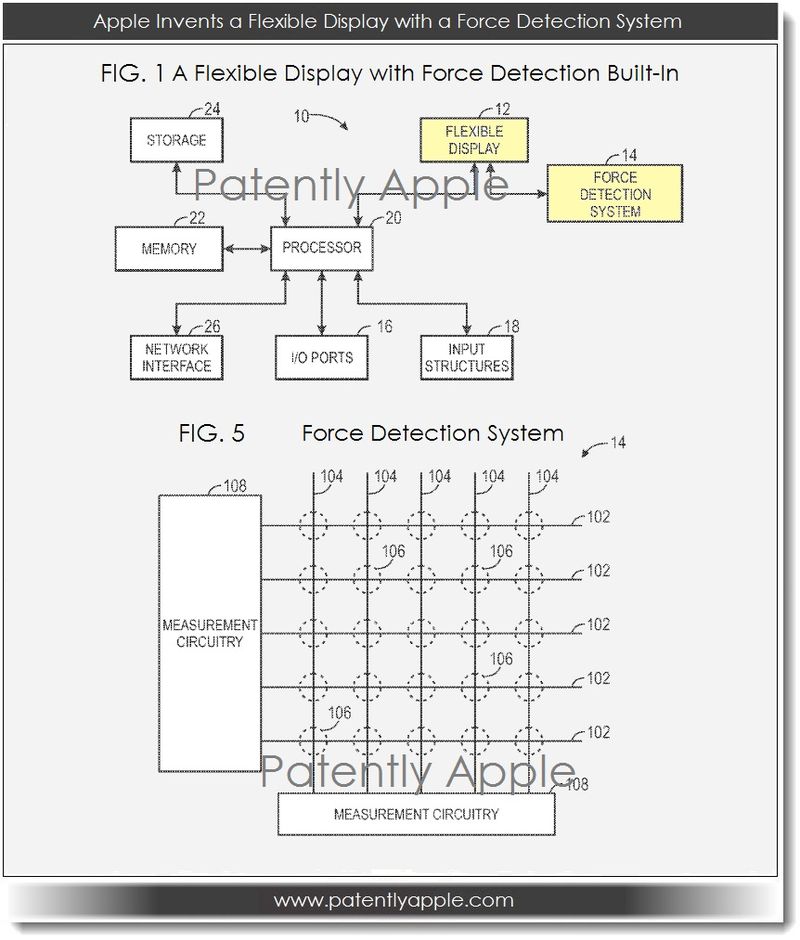 Adding Magnitude of Touch Inputs on a Flex Display

Apple's patent FIG. 3 illustrated below shows us an iPhone running GarageBand that uses a magnitude of touch inputs. The proposed flexible display will be able to provide flexible regions (# 44) that enable enhanced flexibility of the flexible display.

According to Apple, The flexible regions may be placed anywhere on the flexible display. As a user touches the keys of the piano or drumsticks and/or the drum the iPhone (or iPad) may provide a visual and/or audio indication of a note (e.g., 58A, 58B, 58C, and/or 58D) being played. It may be beneficial to interact with the GUI based upon magnitude of touch inputs. For example, when playing a piano, pressing keys with increased force may result in louder notes. Thus, by determining a magnitude of force input, the audible and visual indicators of the notes may provide variations in the loudness of notes. 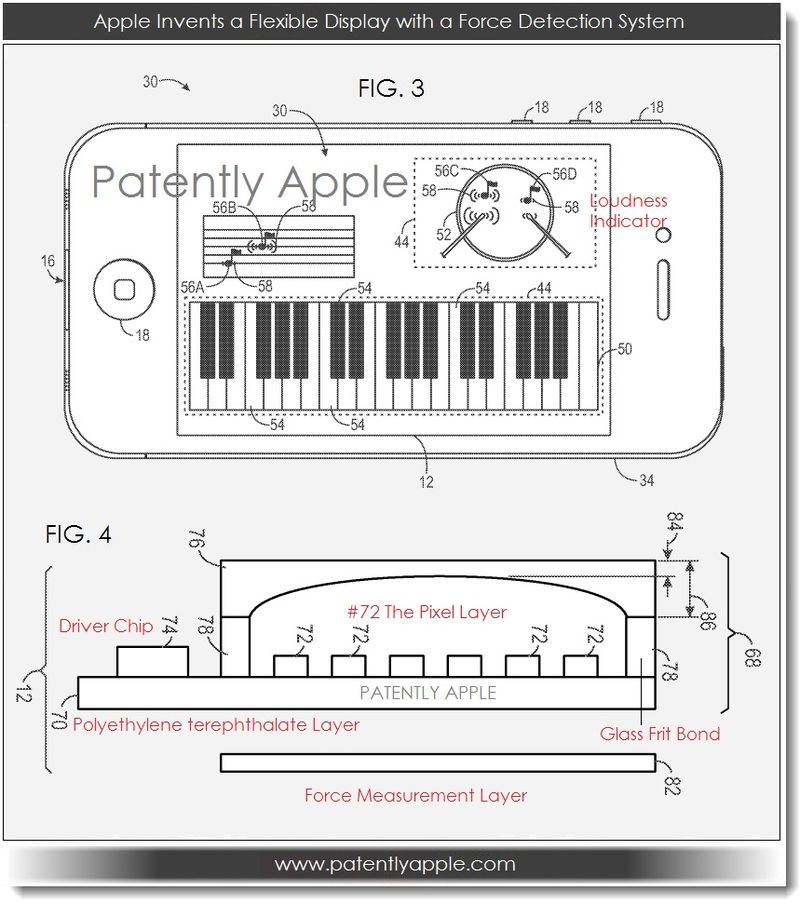 Apple's patent FIG. 4 noted above illustrates a cross-sectional view of the layers present in a particular embodiment of the flexible display. The operation of the TFT layer and the corresponding pixels of the display panel may be coordinated and/or controlled by one or more driver chips, such as a chip-on glass (COG), chip-on flex (COF), or gate-in-panel (GIP)) in communication with the TFT layer. 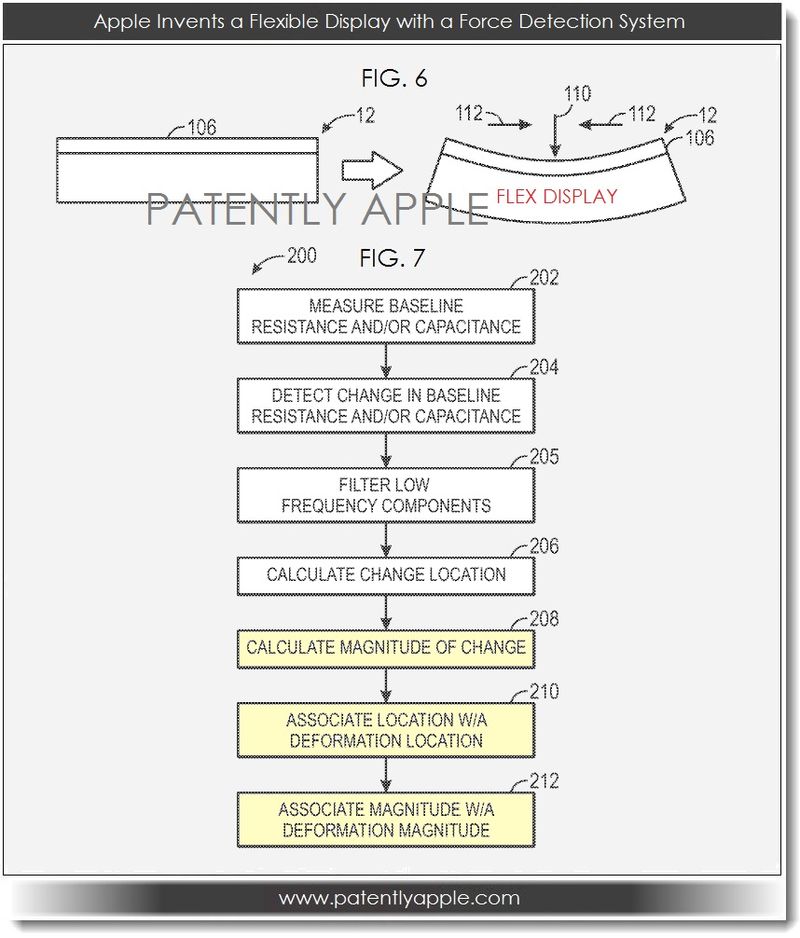 Resetting the Baseline of the Strain Gauges

Apple credits Stephen Lynch, Benjamin Rappoport, Fletcher Rothkopf, Paul Drzaic and Scot Myers as the inventors of patent application 20130135244 which was originally filed in Q4 2011. It should be noted that our patent report is based on Apple's "Detailed Description" segment of their patent application. To review Apple's patent claims, see Apple's patent filing. Considering that this is a patent application, the timing to market of such an Apple product is unknown at this time.