Apple Invents a Wild New Display that could conceal a Camera, Strobe Flash and/or Fingerprint Scanner until Needed 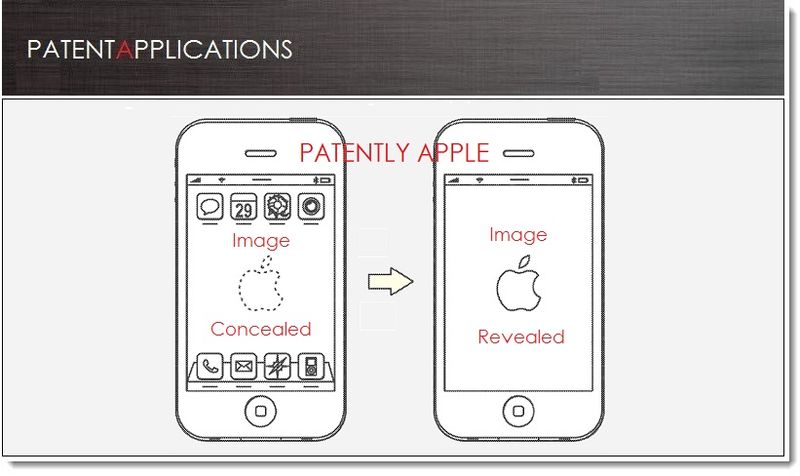 Every once and a while a very cool idea emerges in a patent that puts a smile on our faces just because we know that Jony Ive and his team (the Crazy Ones) have come up with yet another aesthetically minded industrial design. Today's little gem hits on a number of interesting things. Firstly, Apple has designed a display that could conceal or reveal hidden components behind a display such as a camera and strobe flash so that they could be eliminated as physical features on an iPhone, iPad or other computer. Apple states that "Placing components that would typically be found on the surface of an electronic device enclosure behind a transparent display may increase the surface real-estate of the enclosure for a larger display or additional components. Further, the aesthetics of the electronic device may be greatly enhanced by not cluttering the device enclosure with always-visible components, but instead creating a more seamless electronic device where the components are only visible when they are in use." Secondly, beyond the camera and strobe flash, there's an additional key component that Apple wants to conceal that's noteworthy, and that's a fingerprint scanner.

Hiding & Revealing Components behind a Display

Perhaps most noteworthy are components that, when functioning properly, have traditionally required external exposure to light or that emit light. For example, these "light-dependent components" may include an optical scanner (e.g., a biometric fingerprint scanner), a camera, a strobe, a light sensor, a proximity sensor, or a solar panel.

Furthermore, the size of the display may increase because as components are disposed under the display, more surface real-estate of the device enclosure may become available. 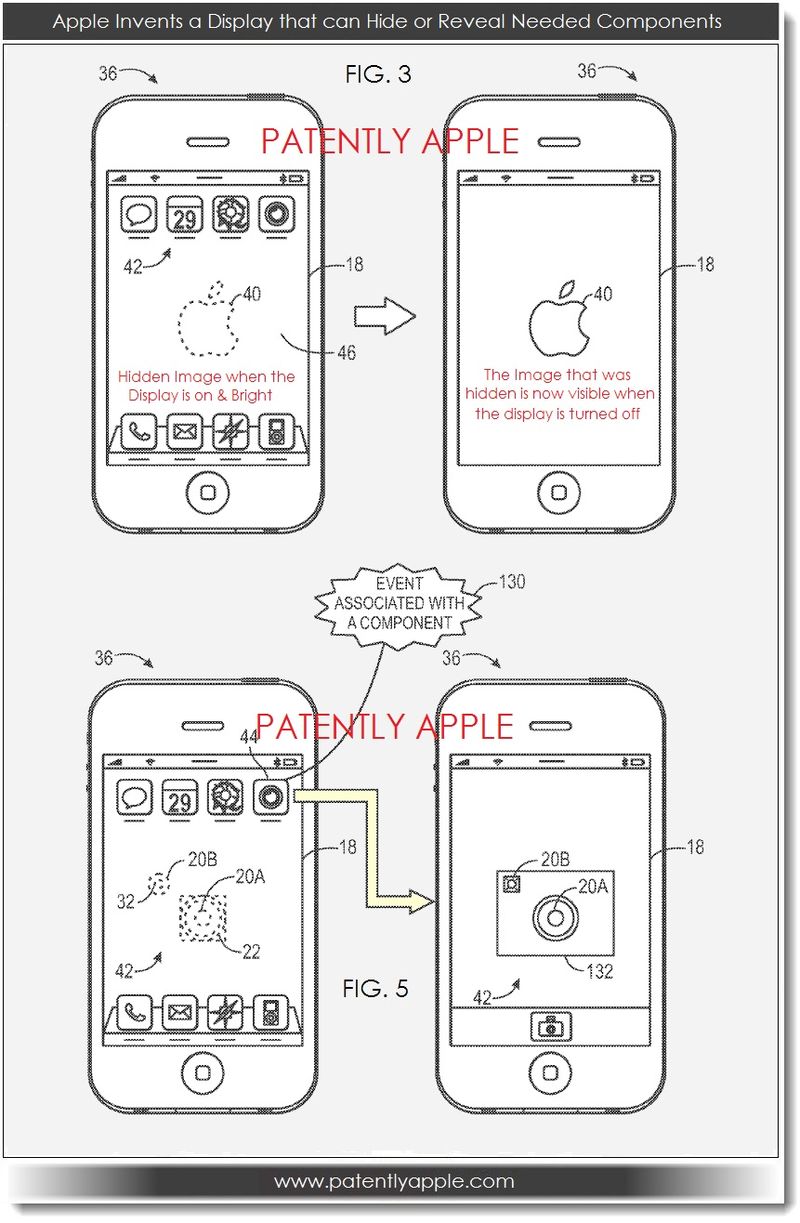 Overview of the New System

Apple's patent FIG. 1 illustrated below is an electronic device (iPhone) for performing the presently invented techniques that may include, among other things, one or more processors, memory, non-volatile storage, a display with one or more transparent regions, image capture device(s) (cameras), an I/O interface, a network interface, input structures, a strobe, and a biometric sensor 34 (e.g., a fingerprint reader). 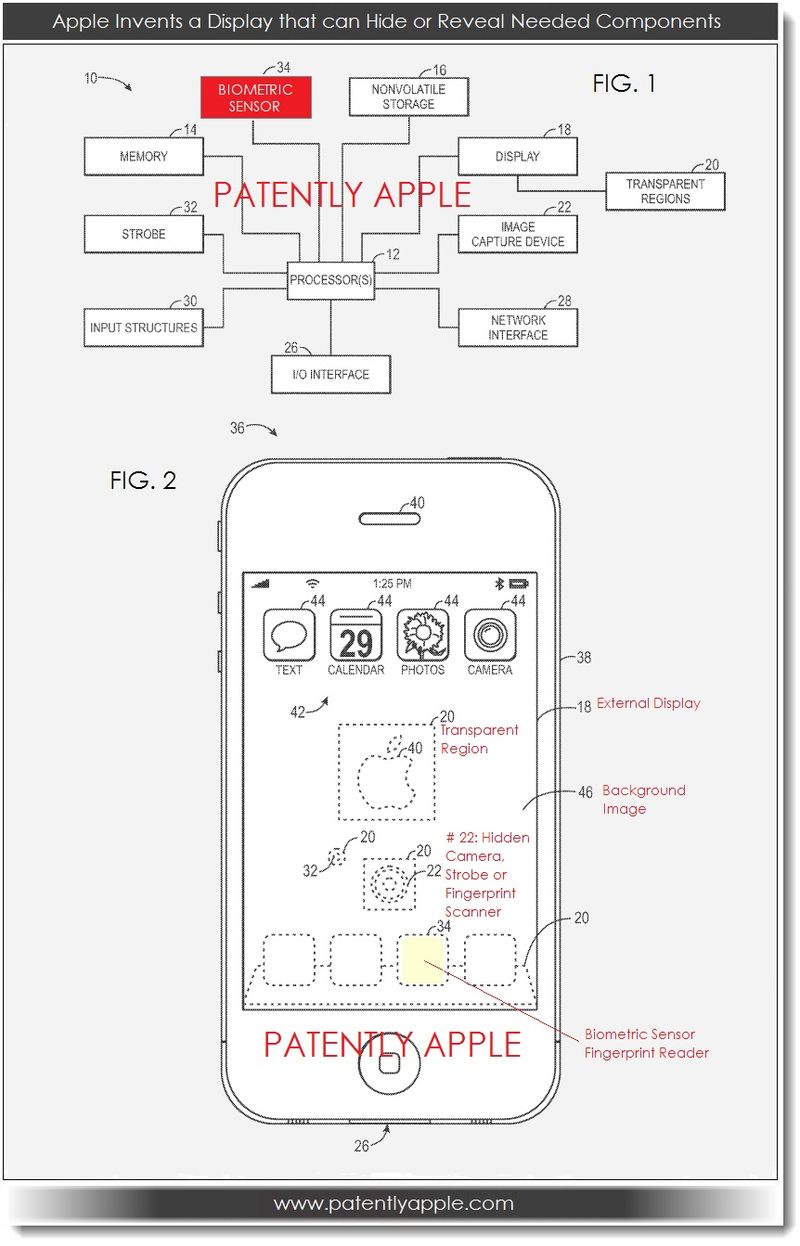 Apple's patent FIG. 2 represents one embodiment of the electronic device in the form of an iPhone, though the device in reality could be any device such as an iPod, an iPod touch, a handheld game platform, an iPad, a MacBook Pro/Air or any combination of such devices.

Apple states that in certain embodiments, one or more components may become visible when the iPhone is turned off or when a feature is called up. The transparent display may conceal a variety of components of the iPhone such as the camera, the strobe, and/or a biometric sensor such as a fingerprint reader.

Apple credits Benjamin Rappoport, Christopher Stringer, Fletcher Rothkopf, Jeremy Franklin, John Ternus, Julian Hoenig, Richard Howarth, Scott Myers and Stephen Lynch as the inventors of this patent application which was originally filed under serial number 308119 in Q4 2011. It should be noted that our patent report is based on Apple's "Detailed Description" segment of their patent application. To review Apple's patent claims, see Apple's patent filing. Considering that this is a patent application, the timing to market of such an Apple product is unknown at this time.

But keep in mind that Apple possesses other technology to hide tiny cameras in with pixels too. Check out Apple's older patent below. You might find it interesting.

At first glance, I thought it was a brilliant idea to have something like that. A camera hidden behind the center of a LCD display and doing FaceTime will be much better. However, the camera could not work with FaceTime since the camera needs to show up by hiding display pixels in front of it. Therefore, camera hidden at the center of the display is impossible to work with FaceTime. It could still work if it is hidden at the top center behind the display. Well, I guess it is still better than what we have right now and I love the idea that finger print scanner behind the display although I love the rumours about finger print scanner hidden behind the Home button.