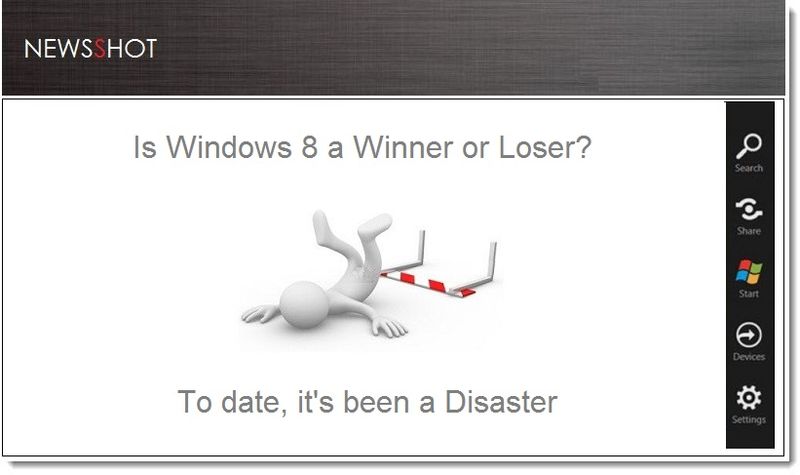 Wow, has the PC industry been KO'd by the mobile revolution that Apple began with their iPhone in 2007? It appears so. Microsoft didn't see it coming and they never thought it would ever come to this point in time so quickly. A new study out by IDC states that the PC industry is tanking faster than anyone could have ever imagined and Wintel just can't grasp how to stop their ship from sinking. They may have one last crack at turning this around later this year with new Ultrabook Convertibles or hybrid notebook-tablets. I think the concept is right, but the nagging doubt about Windows 8 may eventually kill the enthusiasm for this category. Wintel is down for the count with consumers, and with Google's Glass on the way this fall, it doesn't look hopeful.

According to IDC PC Tracker, Worldwide PC shipments totaled 76.3 million units in the first quarter of 2013 (1Q13), down -13.9% compared to the same quarter in 2012 and worse than the forecast decline of -7.7%. The extent of the year-on-year contraction marked the worst quarter since IDC began tracking the PC market quarterly in 1994. The results also marked the fourth consecutive quarter of year-on-year shipment declines. 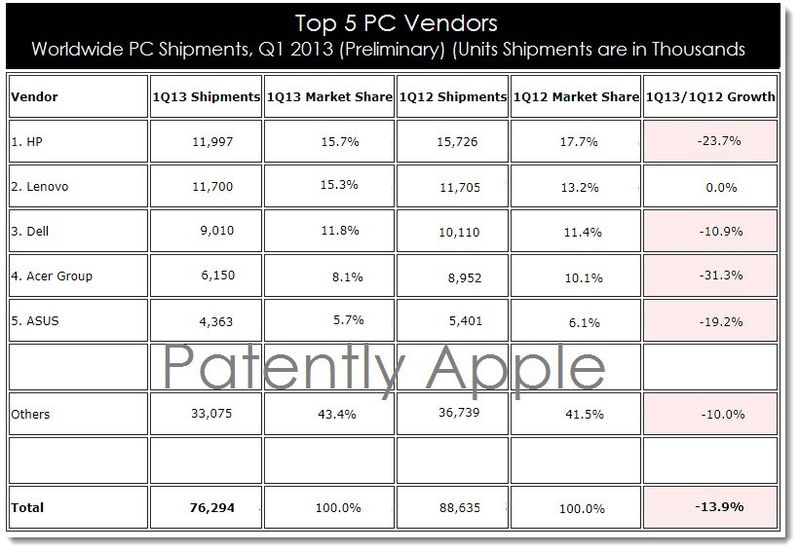 Despite some mild improvement in the economic environment and some new PC models offering Windows 8, PC shipments were down significantly across all regions compared to a year ago.

At the moment, most of the decline could be attributed to fading Mini Notebook shipments which took a big chunk out of the low-end market while tablets and smartphones continue to divert consumer spending.

PC industry efforts to offer touch capabilities and ultra slim systems have been hampered by traditional barriers of price and component supply, as well as a weak reception for Windows 8.

The PC industry is struggling to identify innovations that differentiate PCs from other products and inspire consumers to buy, and instead is meeting significant resistance to changes perceived as cumbersome or costly.

Mr. O`Donnell stated that "At this point, unfortunately, it seems clear that the Windows 8 launch not only failed to provide a positive boost to the PC market, but appears to have slowed the market. While some consumers appreciate the new form factors and touch capabilities of Windows 8, the radical changes to the UI, removal of the familiar Start button, and the costs associated with touch have made PCs a less attractive alternative to dedicated tablets and other competitive devices. Microsoft will have to make some very tough decisions moving forward if it wants to help reinvigorate the PC market."

The report also notes that the impact of slow demand has been magnified by the restructuring and reorganizing efforts impacting HP and Dell.

Windows 8 Adoption in Top Universities is a Disaster

Institutional contracts being a sizable portion of Microsoft's PC business as a whole, a quick study by Chitika Insights team that was published yesterday looked to examine how Windows 8 was faring on college campuses. The results show that it's a clear-cut disaster. A graphical summary of the top schools with the highest and lowest rates of Windows 8 adoption, along with the full list, are both presented below: 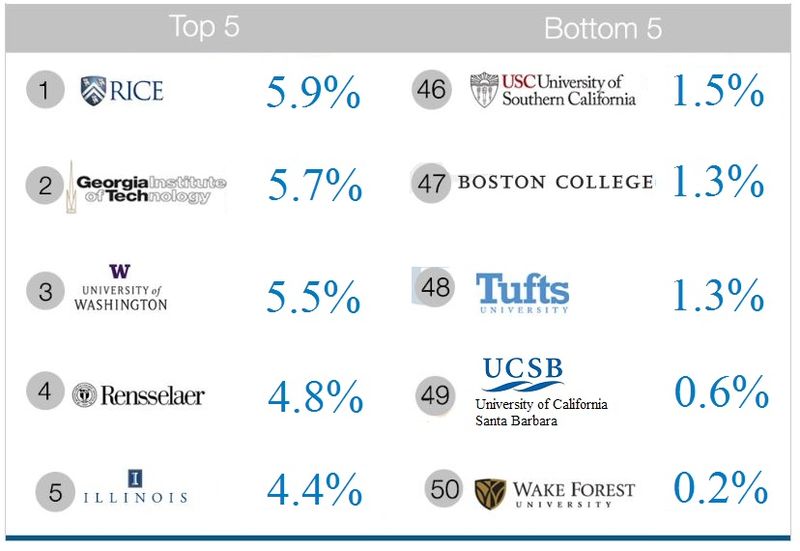 The so called top university list is constantly changing. From the time the study was taken until now it has dramatically changed. So the list of top schools listed in the study is a snapshot in time.

One Last Chance for Windows 8 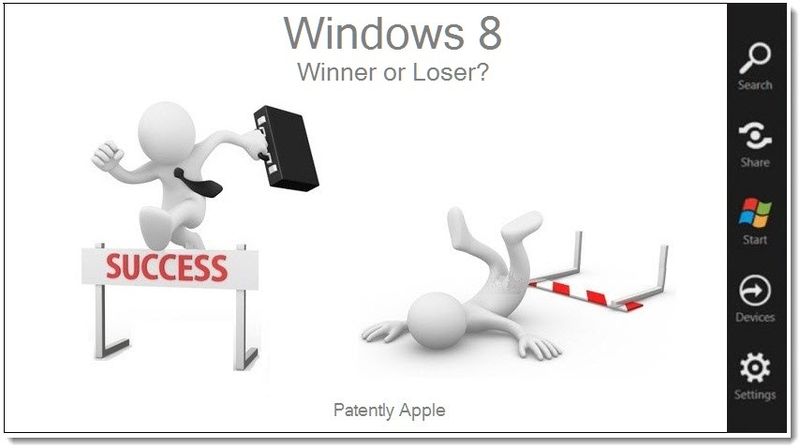 In October 2011 we posted a report about the debut of Windows 8 and asked the question: Will Windows 8 be a winner of loser? Microsoft's presentation at that time was very bold and it appeared that they had their vision in place. Their various teams were beaming with confidence.

But the timing to market of this operating system was a disaster as it was completely disorganized and blindly favoring the release of Microsoft's surprise "Surface" tablet. But as a "Windows" computer OS for notebooks and the desktop it quickly became a disaster. The PC industry's ecosystem just wasn't prepared for this shift and most notebooks and desktop displays weren't touch-enabled. Add to that, the media absolutely hammered Microsoft's shift to the Metro Interface for PC's. It was doomed right out of the gate.

The Surface tablet didn't get to most retailers outside the US during the most important season of the year. I didn't see one at Best Buy until the end of January. They truly blew it. Just last month Samsung slammed Windows 8 for the declining PC market. Earlier in the year HP announced a new slate tablet and lo and behold, they gave Google's Android the nod instead of Windows 8.

The last best chance for Windows 8 to make an impact is with their upcoming Ultrabook Convertibles that will essentially provide consumers with a fully functional Notebook with the convenience of a detachable display acting as an independent tablet. I've seen HP's Envy X2 and I really love the idea. The tablet segment is twice as light as an iPad and has better battery life. I think this segment can do well if it's marketed right, if the supply is there, if the prices are in check and Microsoft adds some hot features to get their OS into a competitive position.

Patent Bolt just reported on a new patent from Microsoft illustrating their hope of bringing Xbox gaming to their tablets and Convertibles. The question is when? But no matter how you slice it, they better get their act together before Google runs them over with Glass and Apple delivers their annual killer upgrades this fall.

The next generation Ultrabook Convertibles may be one of the last chances to help turn the traditional PC sector around and get it back to a stable growth trajectory. No one is saying that it will ever return to its glory days because the computer world has fundamentally forever. Tablets and smartphones have taken the spotlight with consumers and in the next few years, the wearable computer revolution will be upon us.

Who knows, perhaps Apple will be able to give the desktop market a badly needed jolt of new life this fall. But for now, the referee is giving Windows 8 the ten-count and who knows if Microsoft has it in them to get back off the mat. Time will tell.

You missed the fact that the US military is also trying to do away with Windows, focus more on open source like Linux and Open Office instead of Microsoft Office.
Vista tipped everyone off by being too multimedia focused, tons of errors, and many security holes thereby forcing DoD to say forget that nonsense and stick with XP, and some early systems started to run Linux at that time.

Linux GUIs are effective for what the military needs, their technicians can streamline the code to fit their needs and eliminate all superfluous code. It is not a big mystery, but work at that level and one can almost make an impregnable system.

Microsoft needs to quit releasing new versions every six minutes. Everyone knows that this is just greed. Windows 7 could have continued to be upgraded and they could slow down a bit with the MS Office product releases.

The bottom line, I hope that we can finally get away from these software crack drug dealers.

Apple is good for fun stuff but when it get's serious I always see apple user booting up their parallels or windows on the second partition... so Windows is the only operating system for serious stuff at the time.

If you haven't figured it out, you only buy every other Microsoft OS. Windows 98 was good, windows NT/2000 was crap, XP was great (IMO), Vista was crap, Windows 7 is good, because they made it similar to XP, so now Windows 8 is crap..... wait for the next one,, it should be another good one.

Pros:
- Windows 8 is honestly much faster than Windows 7 at processing (although truth is that I have a new customized Lenovo PC so it may be that too).
- Wifi is incredibly quick (I have top of the line(ish) Intel Centrino Ultimate-N 6300 AGN WIFI.
- Windows 8 starts and shuts down much more quickly
- Windows 8 never crashes.
- Feels like a step in the right direction and a more solid product.

Cons:
- the "metro" interface is a disaster. I have never spent more than 1 minute there and get out of it as quickly as possible and back to the traditional Windows 7 type of screen (minus the start button). It is slow and painful.
- takes a few minutes to get used to switching out of metro as quickly as possible.

That's pretty much it. For a PC buyer who doesn't want a Mac, Windows 8 is a no-brainer.

Windows 8 was released in beta version in order to get feedback; feedback was given by cutting edge power users (Who else uses beta versions?), and Microsoft in their usual arrogance, decided once again to treat their customer base with contempt, by ignoring their feedback, and proceeded with shoving an anti-pc user interface down the throats of the very customers who are Microsoft's life blood; after all Microsoft knows what's best for us, because we're too stupid to know what tools we need to get the job done! Microsoft is getting what they deserve!

Windows 8 is cool while the Mac stinks. You can't do anything with it.

Windows 8 follows Windows 7 and Vista as the latest in a series of dud operating systems. You would have thought that they would have noticed the trend and done something sensible for a change.

Windows 7 is the best Windows ever.. windows 8 is more for phones and tablets. I don't like the interface..

Microsoft ruins everything they touch, even their own products keep getting worse as they mess with them.

I went back to Windows 7 Ultimate 64bit after just two days of Windows 8. It's a total piece of crap!