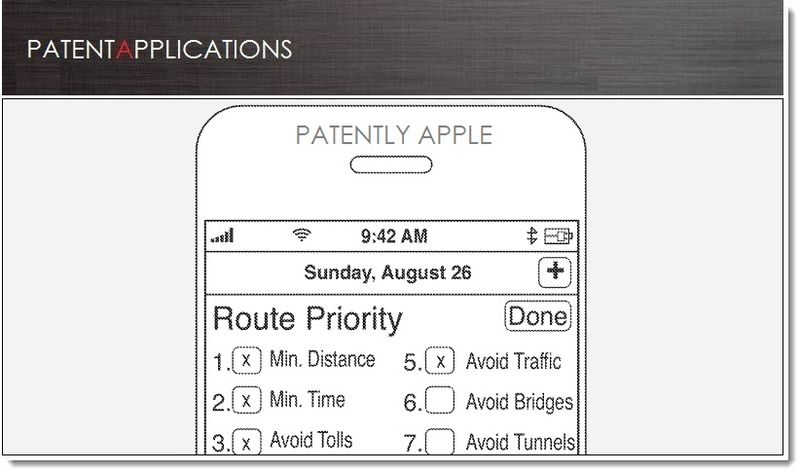 On April 25, 2013, the US Patent & Trademark Office published a round of eleven original patent applications from Apple today excluding 15 continuation patent filings. In this report we cover two patent applications relating to Apple's "Maps" App, a new buckling shock mounting system to better resist mechanical shock and a list of five others covering matters such as data transfers using the Low Energy Bluetooth standard and battery technologies.

Apple's invention generally relates to displaying a number of calculated navigation routes for their "Maps" App. Each route may be highlighted in a manner that allows each route to be easily differentiated. For example, each route may be identified with different color or highlighting schemes and/or may be identified by an unobtrusive callout. As disclosed herein, a callout refers to a marker that provides identifying information about a particular route.

For example, prior to a route being selected, all available calculated routes may be highlighted with bright colors. Once a particular route has been selected, the highlight colors for the unselected routes can change to more subdued tones. Furthermore, any callouts associated with unselected routes may be removed, faded, made smaller, or otherwise de-emphasized once a particular route has been chosen. Similarly, the selected route may be displayed more prominently than it was prior to being selected.

Apple's patent FIG. 7 noted below shows an illustrative screen shot of an iPhone that includes a screen route priority menu, callout display menu. The route priority menu contains options that can allow the iPhone to calculate navigational routes according to a user's preferences.

A user can rank options in the route priority list according to their relative importance to the user. For example, the menu shows Min. Distance as the number one ranked option and Min. Time as the second. However, a user may choose to reorder the list. To reorder the list, a user may, for instance, tap and hold an option and drag it to the desired position in the menu. A user may also choose to uncheck any of the options in order to remove that option from route calculations. 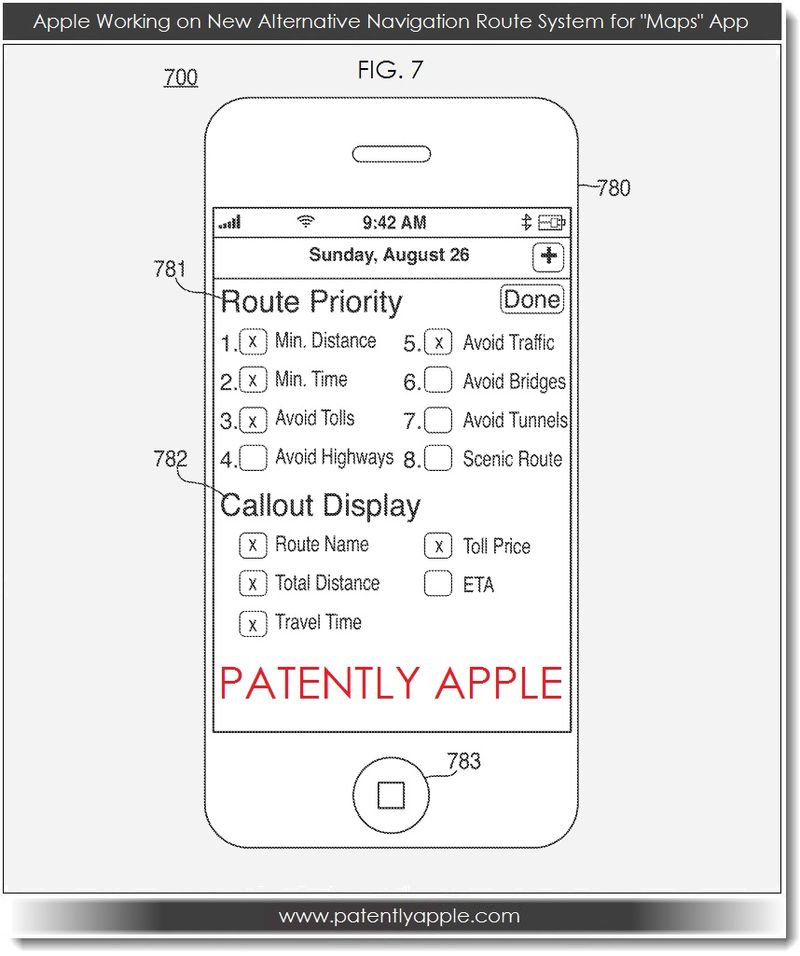 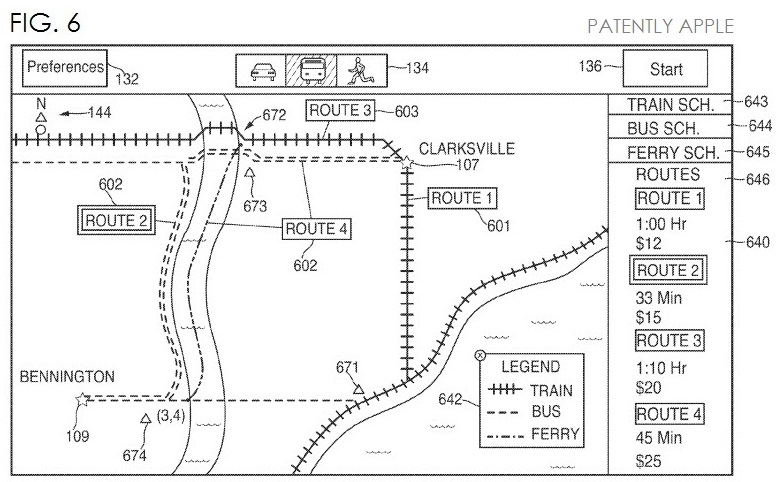 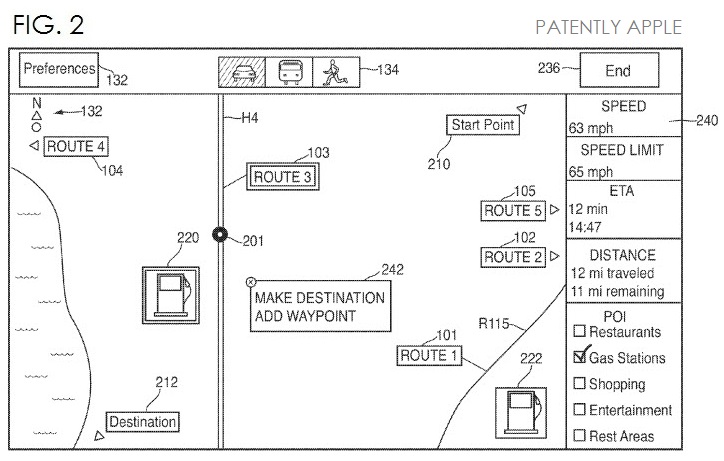 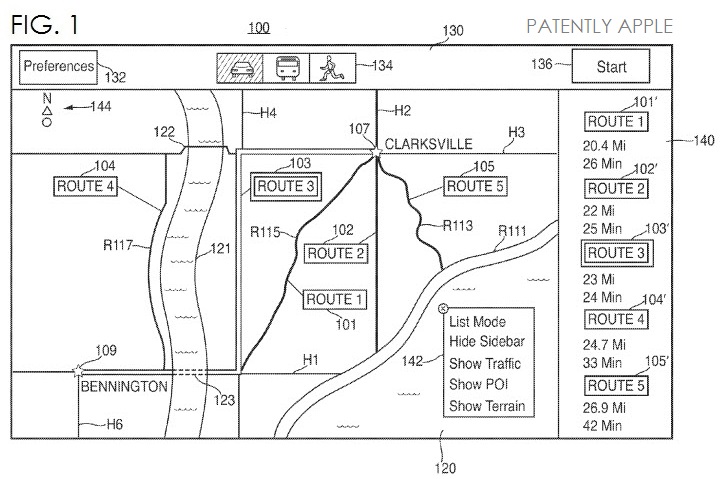 Unless you're an avid "Maps" user, it's difficult to tell what's already been added to the current "Maps" app and what's coming to the application in the future.

Systems and Methods for Printing Maps and Directions

A secondary patent application related to Apple's "Maps" app surfaced today that is titled "Systems and Methods for Printing Maps and Directions." 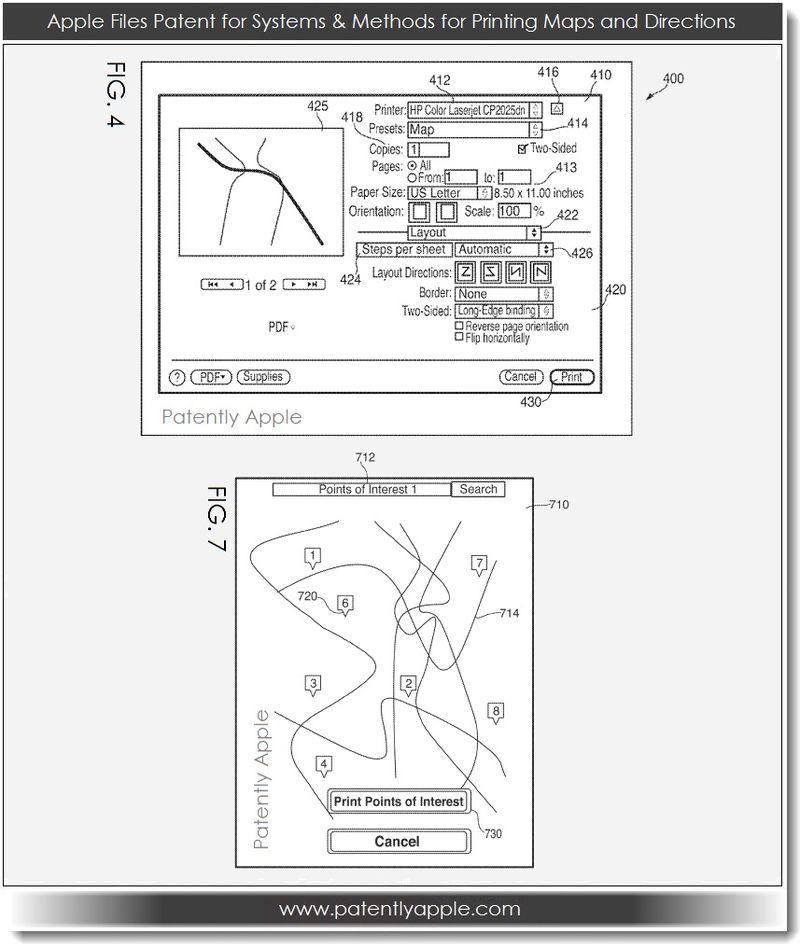 Apple has filed a new patent application relating to a buckling shock mounting.

As many of today's electronic devices are handheld or portable, the likelihood that a particular device gets dropped at some point during its useful life is relatively high. As such, shock absorbers have been implemented to help decrease the impact of mechanical shock experienced by certain components. Conventional shock absorbers, however, may be generally incapable of providing a desired amount of cushion against shock. Further, they may not provide adequate support to hold the component in a desired position within a housing of the devices.

Apple's invention relates to a buckling shock mounting system that may take the form of a plurality of panels oriented uprightly within a plane to form at least one geometric shape. The plurality of panels is made of a uniform material and each of the panels is configured to buckle when a threshold amount of force is applied perpendicularly to the plane. 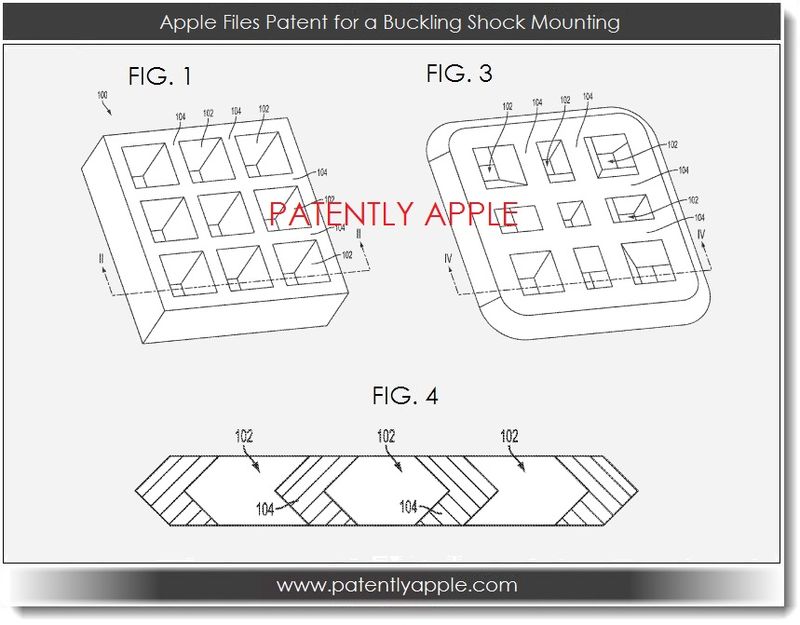 The invention could apply to a camera, a display, a hard disk drive, a speaker, a microphone, a printed circuit board, or other such component. For more on this see patent application 20130100591.

Patent Application 20130104239: System and Method for Obfuscating Data using Instructions as a Source of Pseudorandom Values