A pioneer in wireless communications, Mobile Telecommunications Technologies Corp. offers paging and messaging services to U.S. and international customers. Known to pager customers in the United States through its SkyTel subsidiary, Mobile Telecommunications (MTel) served customers in more than 19 countries during the mid-1990s through its SkyTel system, which transmitted messages to more than one million pagers in North America, Latin America, and the Pacific Rim. During the first half of the 1990s, the company recorded robust financial growth, more than doubling its annual revenue volume, and increasing the number of paging units in service nearly tenfold. On September 19, 1995, Mtel made wireless communications history by launching the world's first two-way narrowband wireless messaging service dubbed "SkyTel 2-Way," enabling customers to respond to messages from their two-way messaging units.

According to the formal complaint, Apple has directly infringed and will continue to directly infringe claims of the 5,809,428 Patent by making, using, selling, offering for sell, and/or importing in the United States mobile devices using iOS and networks that provide Apple's iMessage communication service and other messaging services, including MMS text messaging services, XMPP-based messaging services and email services such as Google Gmail, Yahoo mail, AOL, Microsoft Exchange, Hotmail and Apple's iCloud and other email and messaging solutions and apps provided by or through Apple or its App Store (collectively "Messaging Services"). The networks include one or more Messaging Service network operations centers provided by or through Apple.

According to the formal complaint, Apple has directly infringed and will continue to directly infringe by making, using, selling, offering for sell, and/or importing in the United States devices, namely the Apple AirPort Express, AirPort Extreme, and Time Capsule (collectively "Dual Transmission Devices"), that embody the claims or practice the methods of the 5,590,403 Patent, the '891 Patent and the 5,915,210 Patent. Apple's accused products implement and use the Wi-Fi standard IEEE802.11n. Apple has infringed and will continue to infringe the '403 Patent, the 5,659,891Patent and the '210 Patent because of the "simultaneous dual-band 802.11n" feature advertised as part of the accused Dual Transmission Devices, among others. 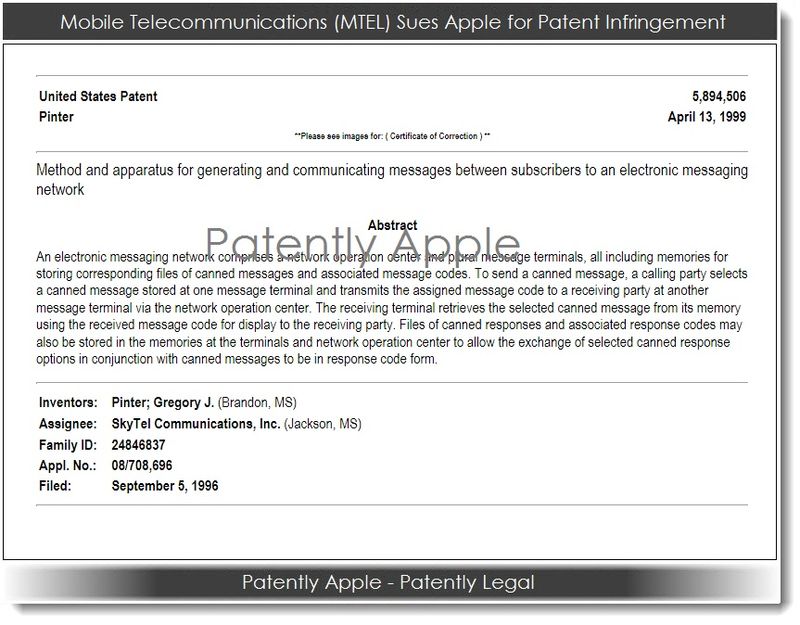 The patent infringement case presented in today's report was filed in the Texas Eastern District Court, Marshall Office, Harrison County. At present, no Judge has been assigned to the case.