In Q1 Samsung continued their Lead over Apple in Worldwide Smartphone Market Share, but not in Profits

According to DRAMeXchange, a division of global research firm TrendForce, in the first quarter of 2013 smartphone shipments increased steadily worldwide, with total shipments reaching 216.4 million units, 9.4% Quarter-over-Quarter growth. Since the beginning of 2012, smartphone shipment figures have been up every quarter despite seasonality. Apple announced yesterday that it shipped 37.5 million iPhones giving them a 17.3% market share. In contrast, Samsung is on target to ship 65 million units this quarter which will account for a 30% market share lead.


The report also states that with new products from Samsung, HTC and Sony coming to market this quarter and Apple standing still, Apple's position in market share will continue to erode. 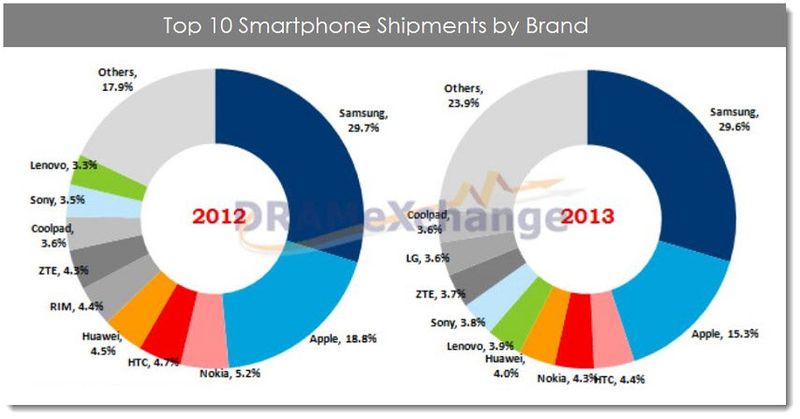 What the report failed to note is who made more money. On that point, it should be noted that in Q4 2012 Apple took 72% of the Industry's smartphone profits while Samsung only took in 29%. The report also blindly pits Apple's iPhone against a dozen or more smartphones from Samsung.