A San Diego company by the name of e.Digital has filed a patent infringement lawsuit against Apple. The company alleges that most of Apple's products infringe upon three of their patents regarding Flash-R technologies supposedly used in smartphones, tablets and other computers. According to the facts found at Wikipedia, the company actually makes more money suing companies than selling products.


The e.Digital Corporation has filed five separate lawsuits yesterday against Apple, Research in Motion/BlackBerry, Huawei Technologies, Futurewei and ZTE Corporation who allegedly infringe on their patents covering the use of flash memory technologies.

Anton Handal, counsel for e.Digital Corporation stated that "The Flash-R patent portfolio is rich in technologies and teachings that are central to the functionality of many current consumer electronics products. We are also seeing the use of file editing functionalities in these products that are embodied in the '170 patent. In addition, we are seeing many flash-based devices utilizing a memory integrity technology that was patented by e.Digital. Determining memory integrity is very important technology in today's highly-integrated consumer electronics." 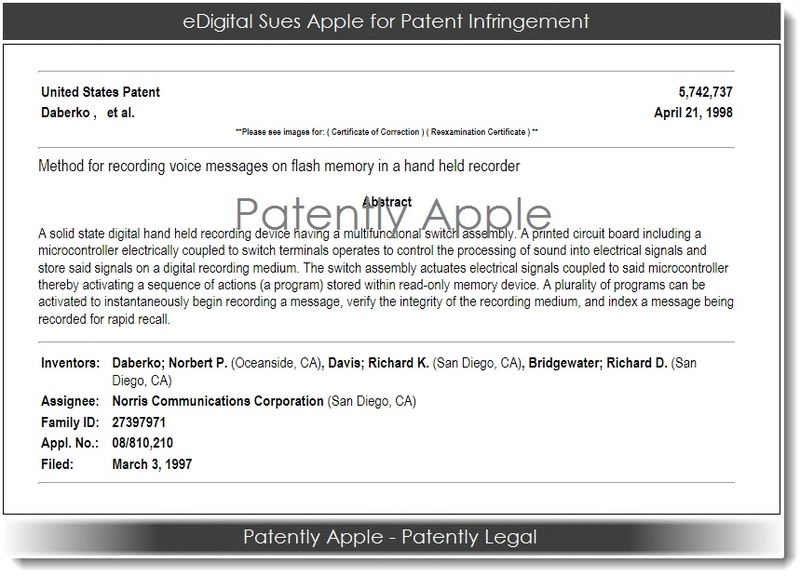 According to Wikipedia the company presented a "going concern warning" in their 2009 10-K annual report as follows:

According to Wikipedia, "Throughout its over 22-year history, e.Digital / Norris Communications continuously lost money. The accumulated deficit at March 31, 2010 was $80 million. Although the company reported its first annual profit for its fiscal year ending March 31, 2009 due to settlements with six of eight defendants of its patent infringement lawsuits which resulted in one-time licensing fees totaling $10.1 million, the company returned to an unprofitable status in fiscal year 2010, posting a net loss of $985,000. Revenue for products totaled $205,000 with service revenue totaling $749,000. Patent infringement settlement income totaled $1,600,000 for total revenue of $2,554,000." It's pretty clear that in order to survive, e.Digital must continue to sue other companies as the numbers presented above clearly indicate that this is their only real money maker.

The patent infringement case presented in today's report was filed in the California Southern District Court, San Diego office. The Presiding Judge in this case is noted as being Judge Michael M. Anello.

I Think Apple will benefits owning these Patents, they can BUY-OUT this one

I think they will get 10M bucks max from Apple.