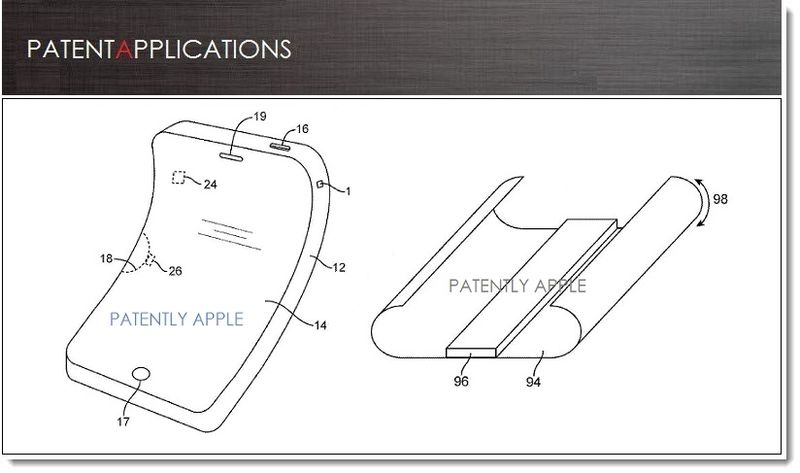 A new patent application from Apple was discovered in Europe this morning that reveals advanced iDevice flex display features. Apple's patent application covers a lot of ground including both flex screen designs and flexible components to make these designs work. One such component is a unique flex battery design. Apple's patent filing also enlightens us with the fact that bending a future flexible centric iDevice may also allow users to open a specific application, control a game function and so much more. In the end, the patent filing provides us with and overview of the the whole future flexible device concept that could eventually cover wearable computers, the iPhone, iPad and even aspects of a MacBook. Our report covers fourteen major patent figures. NOTE: The Entire Report was Updated at PM MST

Apple's patent application which was discovered in Europe this morning generally relates to electronic devices that may have portions that are capable of being flexed.

Future Flexible iDevices will be more Resistant to Impacts

Flexible electronic devices may be more resistant to damage during impact events such as drops because the flexible device may bend or deform while absorbing the impact. Deformation of this type may increase the duration of an impact thereby reducing the impulse received by other components of the flexible device. Further features of the invention, its nature and various advantages will be more apparent from the accompanying drawings and the following detailed description.

In the first group of Apple patent figures presented below we able to see that Apple's patent FIG. 1 is a perspective view of an illustrative flexible electronic device; FIG. 3 is a cross-sectional side view, while FIG. 4 s a cross-sectional side view of an illustrative flexible main logic board formed from a flexible printed circuit substrate with electrical components.

Apple's iPhone 7 will be incorporating a flexible circuit in 2014. FLEXium Interconnect has already secured the order. That may or may not translate immediately to a flex display based iPhone, but it means that Apple has chosen a flexible circuit board supplier that could fulfill designs like those shown below should Apple decide they have the right design in place that could make an impact on the market. 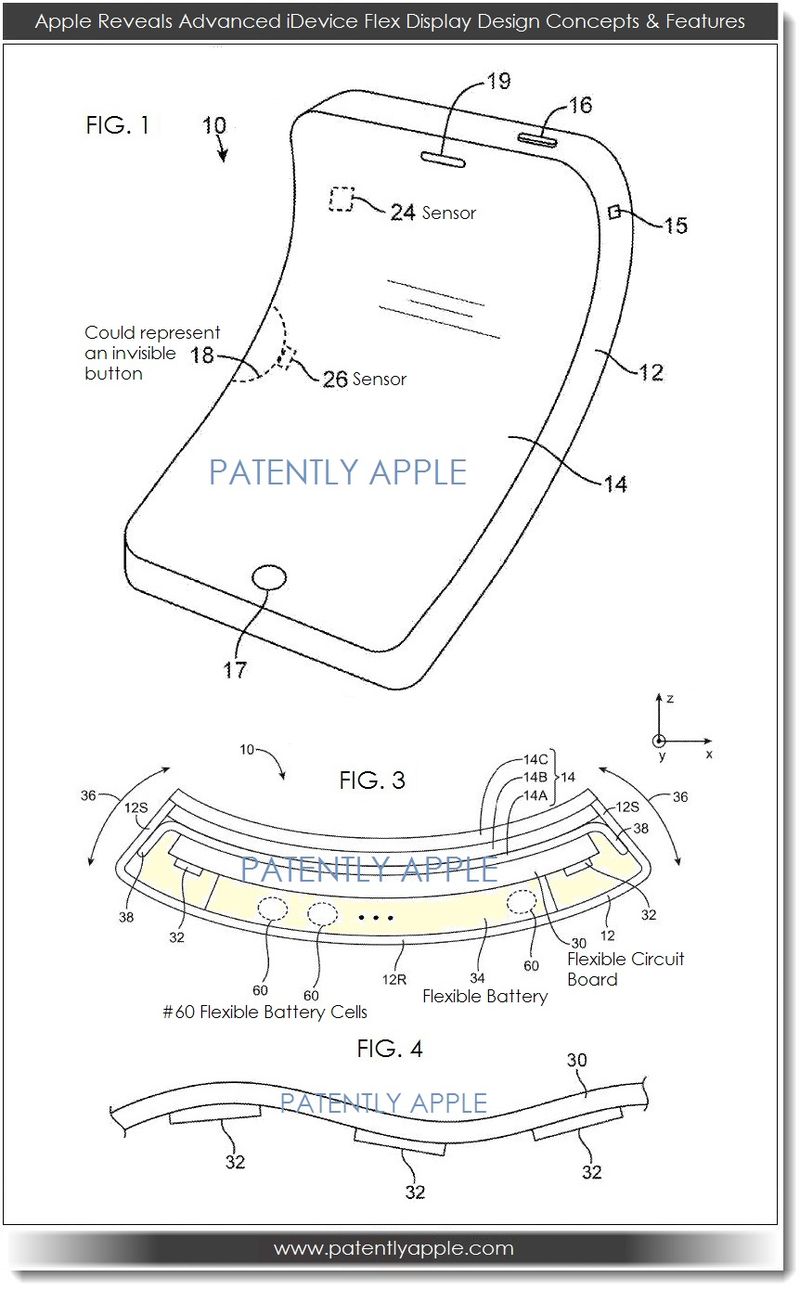 In Apple's patent FIG. 1, noted components 24 and 26 may be proximity sensors, pressure sensors, touch sensors (e.g., a portion of touch-sensitive display 14), light sensors, magnetic sensors, capacitive sensors, or other types of sensors configured to sense deformations of one or more portions of device. These deformations could be translated into input commands as noted earlier. In fact, the outlining shown in patent point number 18 above could represent an invisible button associated with a sensor to activate an action on the iDevice. 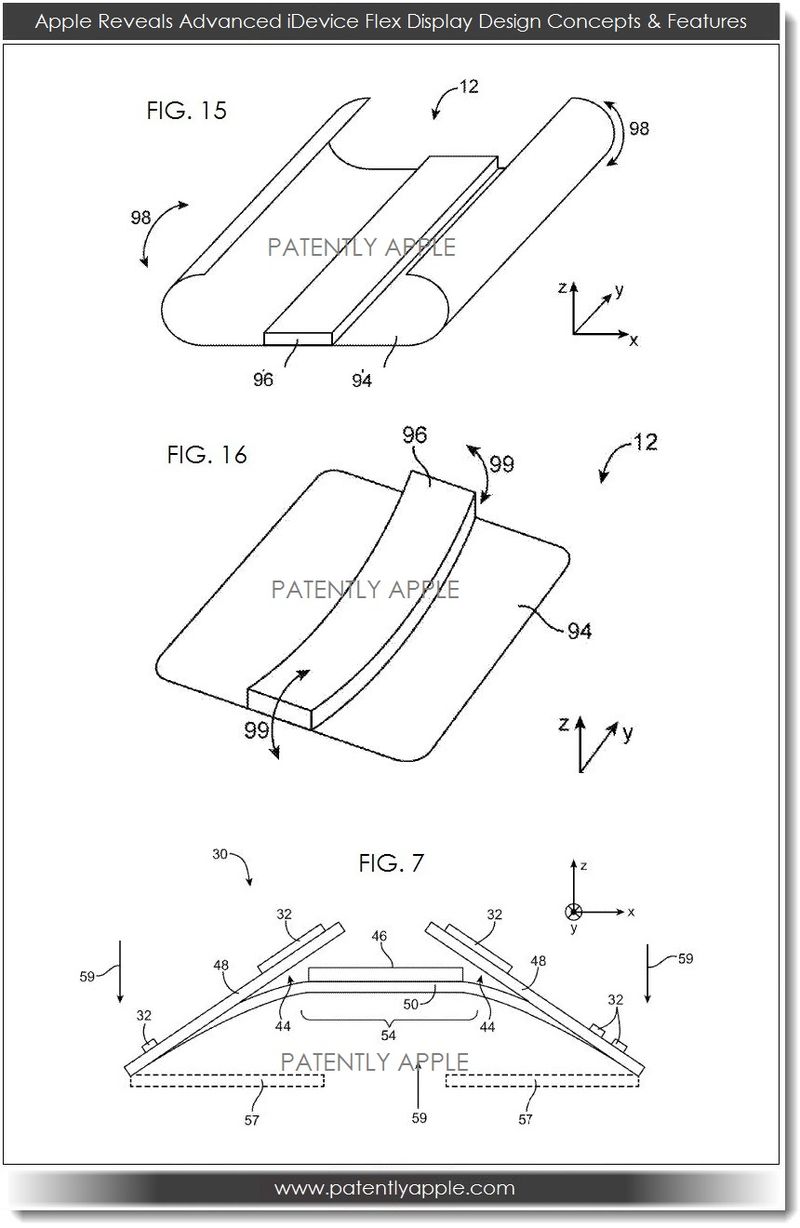 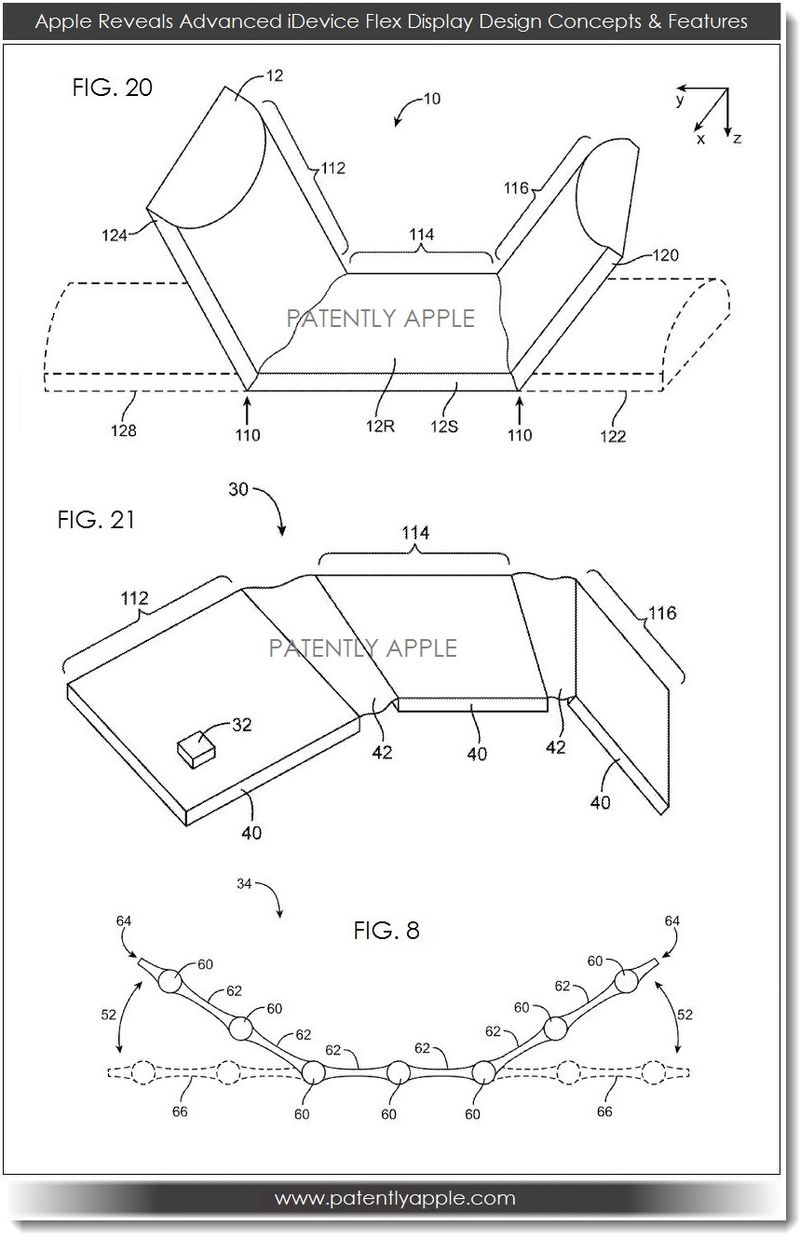 In the last group of Apple patent figures noted below we see that FIG. 26 is a perspective view of an illustrative configurable support member that includes locking spine system for providing flexible and rigid support for a flexible electronic device; and finally, patent FIG. 27 is a cross-sectional side view of an illustrative flexible housing having a configurable support member that includes a bladder system. 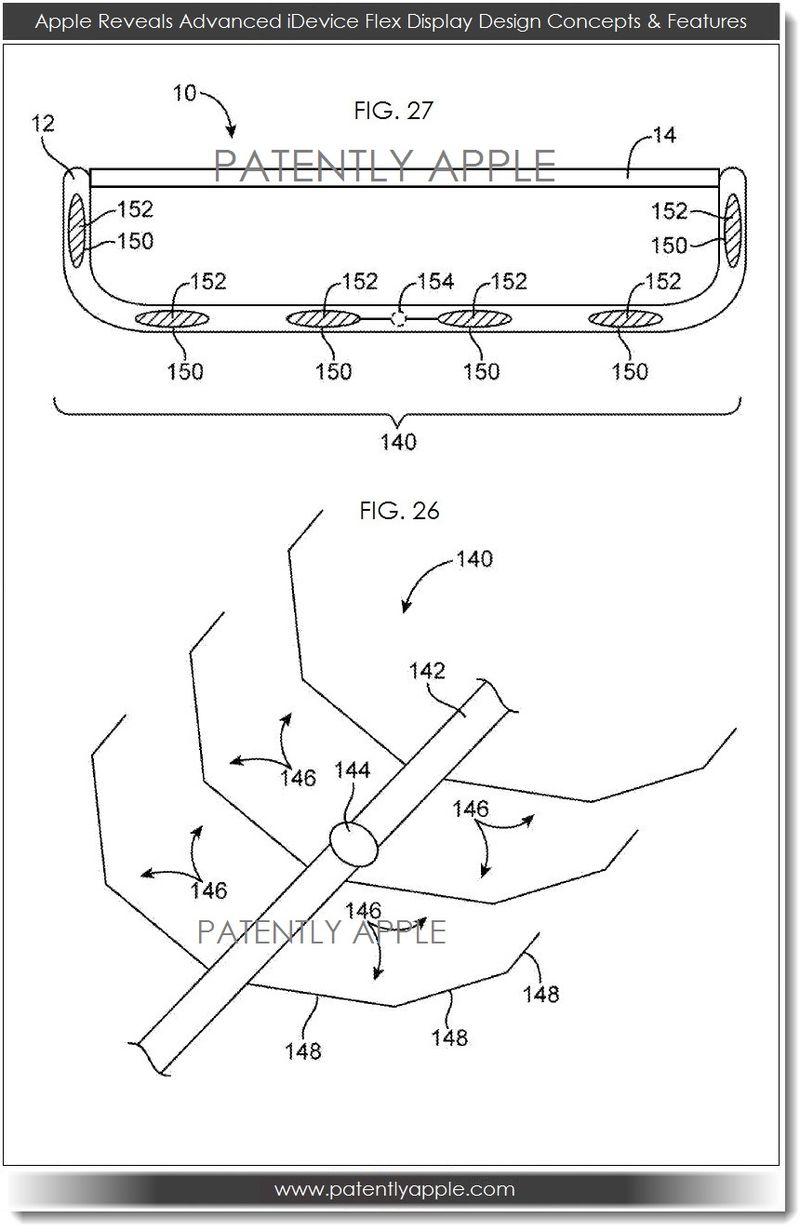 In the end, the patent is a generous basic overview of some of the concepts that will go into the making of a future flexible display based iPhone, iWatch or other device not listed here today, such a cool flexible display for a video headset that Apple has patented. Yes, that's one of the possibilities that such flexible displays could deliver. This is also where Jony Ive could take the iPhone into new and exciting directions that we can't even imagine today. And it all begins with flexible display technology that is discussed into today's patent application report. 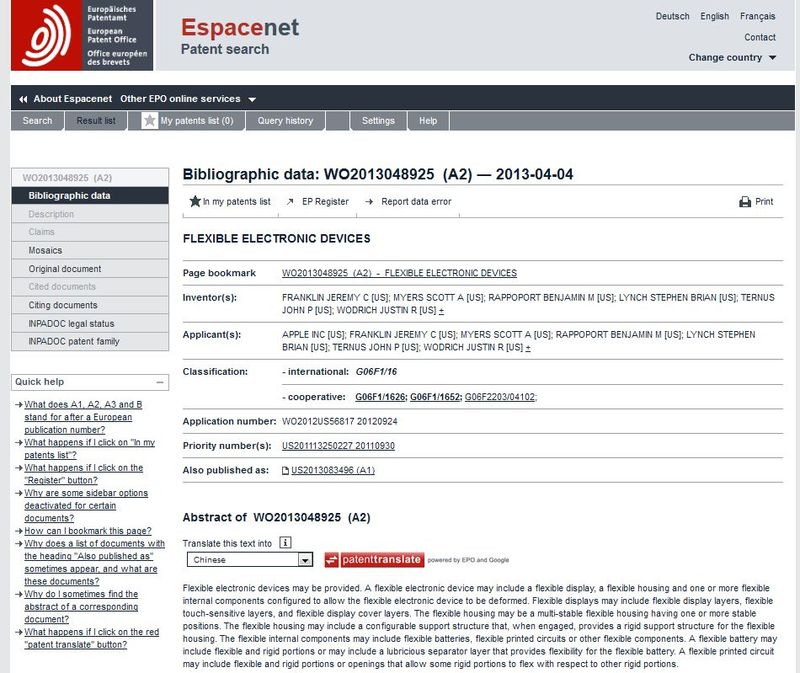 Apple's patent application was discovered in Europe this morning as we note the EU database entry above. The patent makes reference to a US patent but the number comes up blank when you search for it in the US Patent and Trademark Office. The main engineer on this project is Product Design Lead Jeremy Franklin. Further details may be provided over the coming days ahead.

looks like a watch band to me... just sayin'