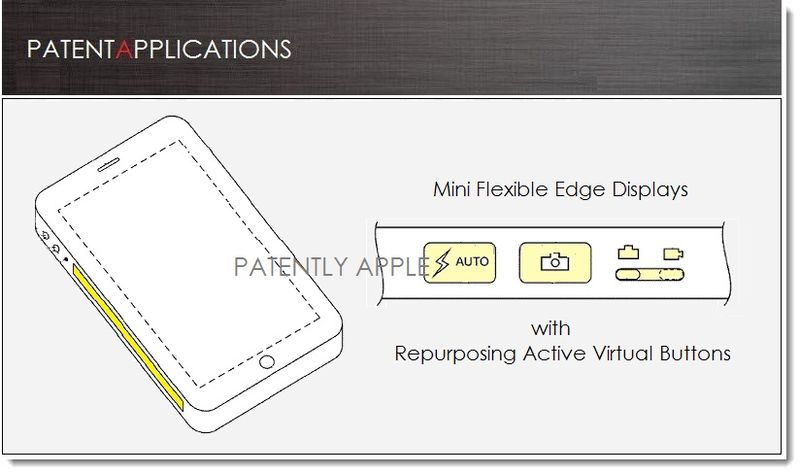 Yesterday we posted an in-depth patent report titled "Advanced iDevice Flex Display Features" which covered a grand overview of flexible display constructions and features that Apple may implement in future iDevices. Today's patent report covers a second distinct invention regarding flexible displays that may be a little more realistic in the medium term. In this invention, Apple is focused on introducing flexible edge displays that will be able to use active virtual repurposing controls depending on the needs of individual users. Apple also illustrates simple Gaming controls that could be activated on these new displays when needed. Apple indicates that these next generation flex displays could be used in future iDevices, wearable computers (like an iWatch) and even MacBooks. We close out our report with a list of 10 other minor patent applications that were published by the US Patent and Trademark Office today.

Electronic devices such as portable computers and cellular telephones are often provided with rigid displays made from rigid display structures. For example, a liquid crystal display (LCD) may be formed from a stack of rigid display structures such as a thin-film transistor glass layer with display pixels for providing visual feedback to a user, a color filter glass layer for providing the display pixels with color, a touch screen panel for gathering touch input from a user, and a cover glass layer for protecting the display and internal components. 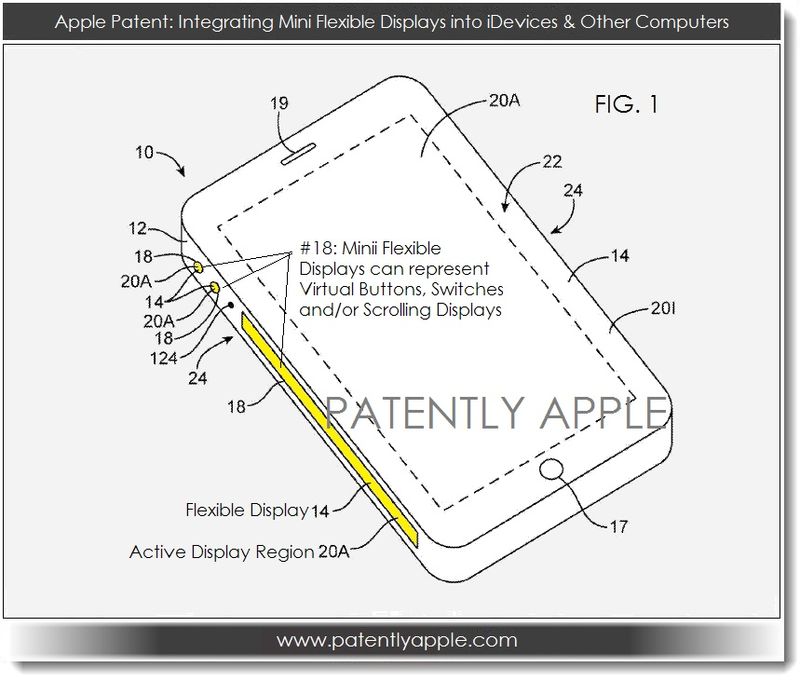 Apple states that flexible displays may be used for displaying information and visual feedback to a user and for accepting input from a user. Active portions of the display configured for user input and output functions may be separated from inactive portions of the display using an opaque masking layer. The opaque masking layer may be formed on an inner surface of the cover layer.

Although a device may come with predetermined images displayed on the flexible display that indicate to a user which function is currently being performed by the virtual button, the buttons and functions could be later changed. 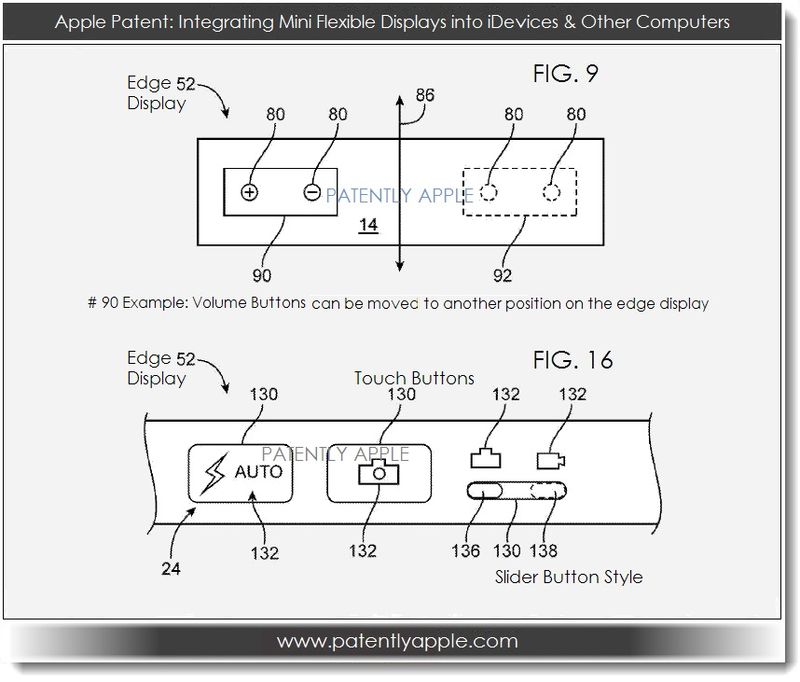 Apple's patent FIG. 14 is an interesting one being that it's noted as being a perspective view of a device showing how virtual buttons that may form a portion of a gaming controller when the device 10 operated in a landscape position. 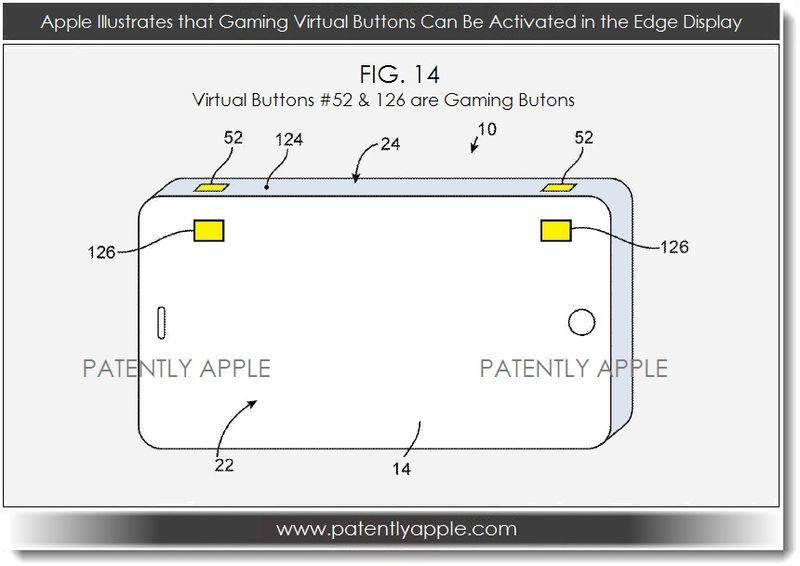 Other Virtual Controls that could be Made Available 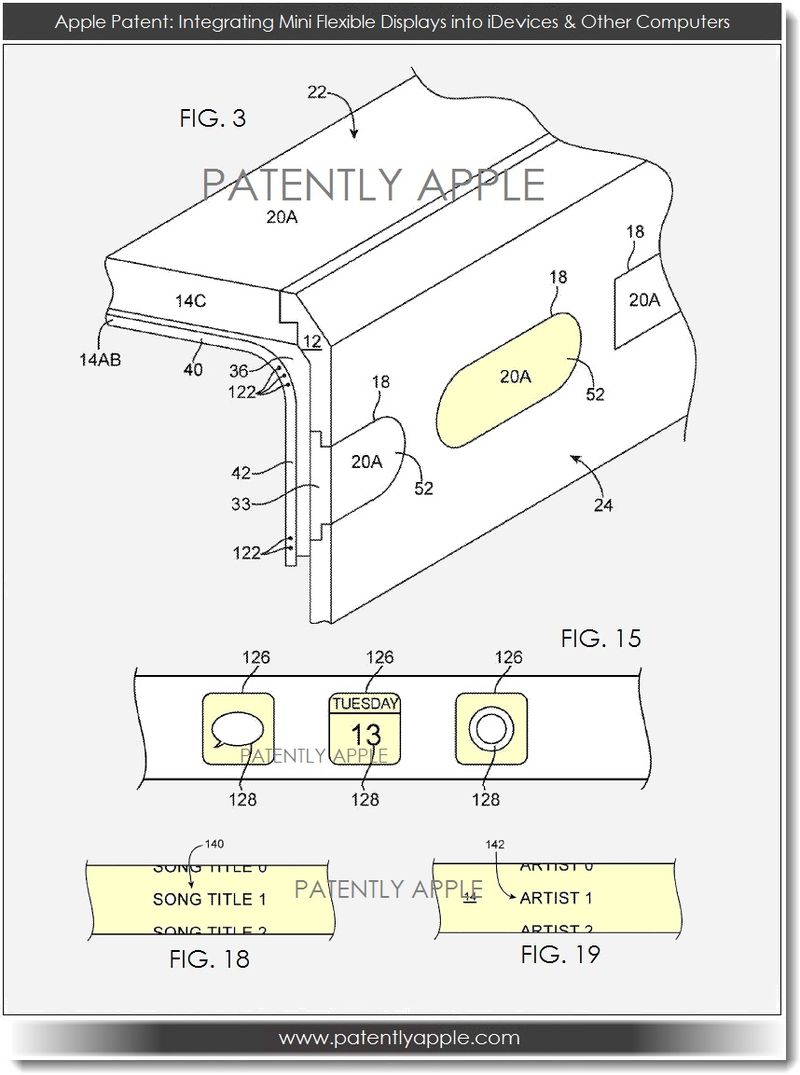 Apple's patent application was discovered in an April 2013 European Filing as noted below.

A List of Patent Applications Published by the US Patent OfficeToday

The US Patent and Trademark Office only published 12 patent applications from Apple today and the ten that are listed below could only be truly appreciated by super-geeks and the curious amongst us: Happy hunting.

Lastly, we list a 2006 continuation patent that Apple acquired from Nortel regarding 3D RF Signatures. Patent FIG. 3 of that patent is presented below. 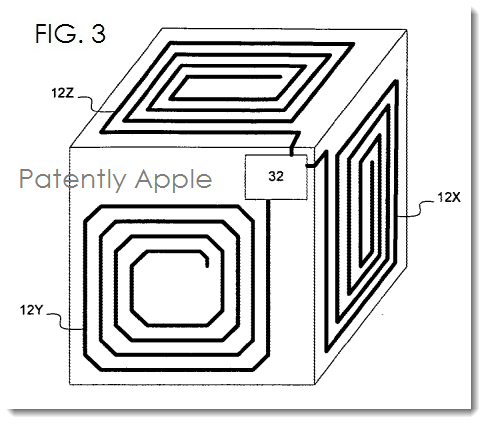