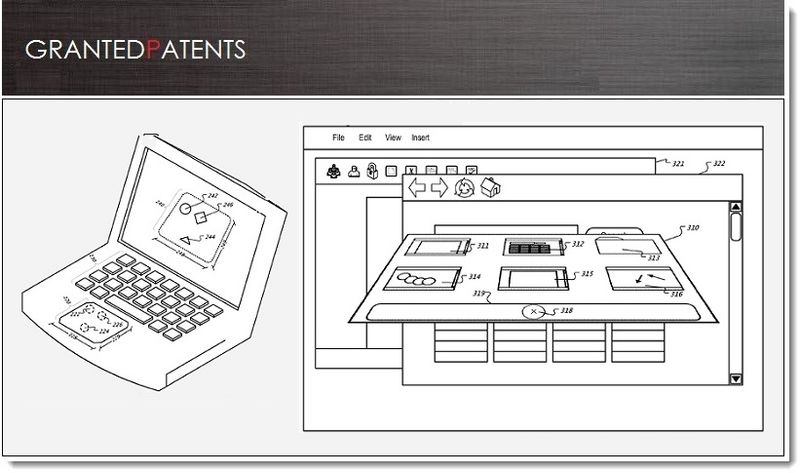 The US Patent and Trademark Office officially published a series of 54 newly granted patents for Apple Inc. today. In this particular report we briefly cover two of Apple's granted patents. The first relates to Virtual Input Tools and the second covers a cool idea called a "virtual expander" for the iPad which has yet to come to market. 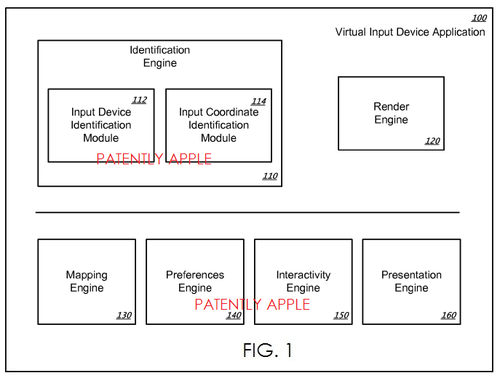 In July 2010 Apple listed a job posting that stated that they were working on a new revolutionary Mac OS X feature. Today the U.S. Patent and Trademark Office granted Apple a patent for new OS X feature that could very well be a part of Apple's noted revolutionary OS X feature. It's a cool virtual input device application that works in both 2D and 3D.

Apple credits John Louch as the sole inventor of this granted patent 8,427,438 which was originally filed in Q1 2009 and published today by the US Patent and Trademark Office. Apple's patent presents 32 detailed patent claims. Our 2010 report provides you with extensive coverage of this patent with multiple graphics to help you visualize aspects of this invention. Our report's cover graphics are from Apple's Virtual input Tools patent.

Another of Apple's granted patents published today covers their invention relating to methods and systems associated with touch screen displays. More particularly, the present invention relates to expanding graphical and sensitive portions of a touchscreen display.

Apple states that "While touchscreens generally work well, they are difficult to use when features such as buttons, web page links, or UI controls presented on the touch screen display are too small for finger activation, i.e., the finger is too large relative to the button, link or UI controls. Furthermore, the features typically don't provide the user with any feedback indicating that a finger is located on the feature. This may make it difficult to determine what feature is being selected. As a result, the user may incorrectly select a feature. For example, in web browsing, users have no control over the size of the link or button presented by a website." This is what the visual expander is to remedy.

Apple credits Peter Kennedy as the sole inventor of this granted patent which was originally filed in Q2 2010 and published today by the US Patent and Trademark Office.

To review today's 10 detailed granted patent claims and details, see granted patent 8,427,445. Click here to review our original coverage of this patent which provides you with full details and array of patent figure graphics.