The US Patent and Trademark Office officially published a whopping 54 newly granted patents for Apple Inc. today. In our last granted patent report of the day we briefly cover Apple's granted patents relating to smart instruments, smart business cards, and magnetic connector ports. To top off our report we provide you with a list of the remaining patents that were granted to Apple today which number over forty.

Apple has been granted a patent today for their invention relating to GarageBand for iDevices and more specifically to its feature relating to Smart Piano Keyboards.

Technically speaking, Apple's granted patent provides systems, methods, and devices for musical performance and/or musical input that solve or mitigate many of the problems of prior art systems. A user interface presents a number of chord touch regions, each corresponding to a chord of a diatonic key, such as a major or minor key. The chord touch regions are arranged in a predetermined sequence, such as by fifths within a particular key. Within each chord region a number of touch zones are provided, including treble clef zones and bass clef zones. Each treble clef touch zone within a region will sound a different chord voicing (e.g., root position, first inversion, second inversion, etc.) when selected by a user. Each bass clef touch zone will sound a bass note of the chord.

Other user interactions can modify or mute the chords, and vary the bass notes being played together with the chords. A set of related chords and/or a set of rhythmic patterns can be generated based on a selected instrument and a selected style of music. Such a user interface allows a non-musician user to instantly play varying chords and chord voicings within a particular musical key, such that a pleasing musical sound can be obtained even without knowledge of music theory. 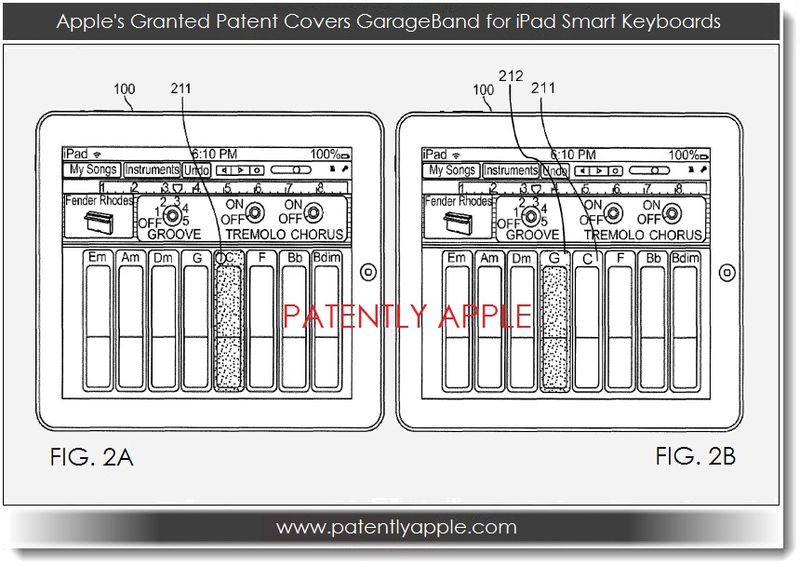 Apple credits Alexander Little and Eli Manjarrez as the inventors of this granted patent which was originally filed in Q1 2011 and published today by the US Patent and Trademark Office. To review today's granted patent claims and details, see US Number 8,426,716.

Apple has been granted a patent today for their invention relating to a combined business card and gift card that is a physical object that can be shared with others at business and social functions. The calling card can include a gift code that can be used to redeem a gift online (e.g., songs, ringtones, coupons, physical merchandise) using an electronic communications device (e.g., a personal computer, mobile phone, electronic tablet).

When a user attempts to redeem the gift online, the user can be provided with a web page, email, text message or other electronic document that provides the user with information about the card provider and allows the user to perform certain actions for the benefit of the card provider or a third party. In some implementations, the information can be presented in a window or other display area generated locally by an operating system or application running on the electronic communications device. 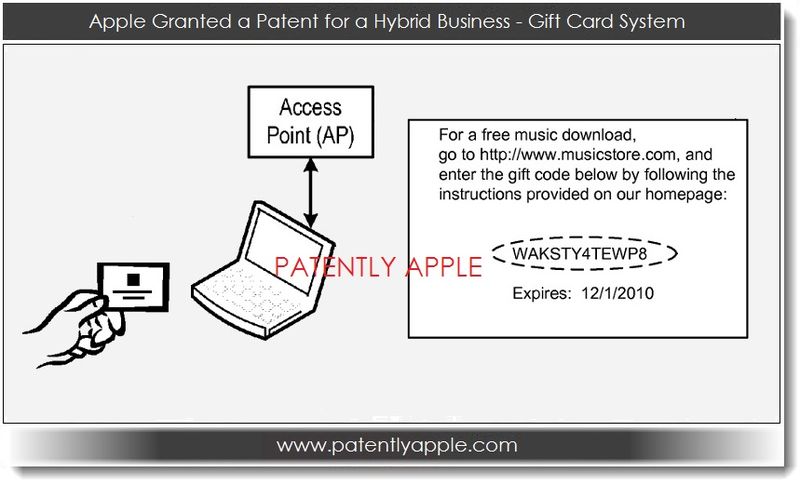 Apple credits Andy Belk as the sole inventor of this granted patent which was originally filed in Q4 2010 and published today by the US Patent and Trademark Office. To review today's 20 granted patent claims and details, see US Number 8,424,756.

For an easier review of the key points and graphics of this invention covering smart business cards, see our May 2012 report titled "Apple Invents a Hybrid Business & Gift Card System. 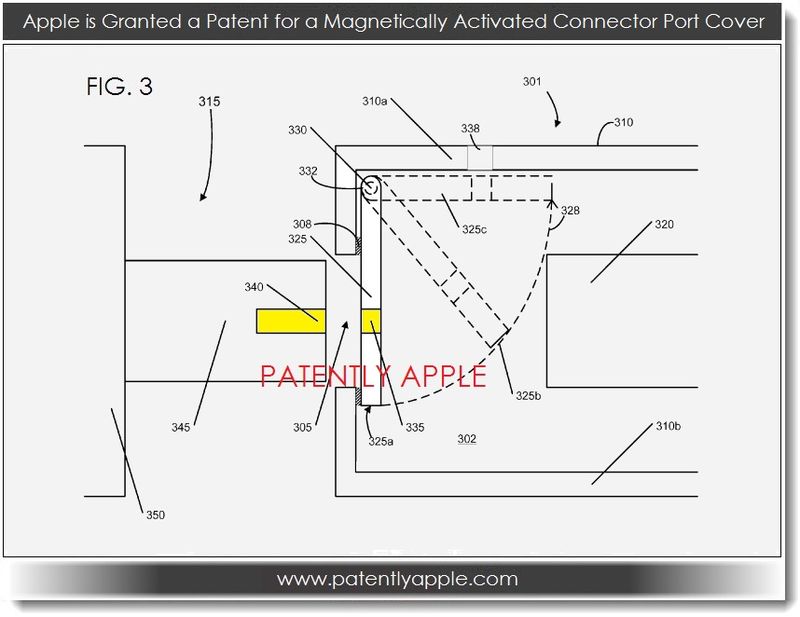 Apple's patent FIG. 3 noted above presents us with a connector port cover 325 that is moveable between an open and a closed position, pivoting at pivot point 330. In one embodiment, the pivot point is part of an actuator (e.g., a spring loaded hinge 332), that is biased to set the port cover in a closed, sealed position represented in FIG. 3 as position 325a and the solid outline of the port cover. The port cover may further include a magnet 335 while connector 315 may include a magnet. The poles of the respective magnets are aligned such that the magnet repels magnet 335 when connector 315 is moved proximate to opening 305.

According to Apple, the magnets can be made from any appropriate magnetic material, such as ferromagnetic or ferrous materials, diamagnetic, paramagnetic or other materials or any combination thereof.

Apple credits Felix Alvarez Rivera as the sole inventor of this granted patent which was originally filed in Q3 2011 and published today by the US Patent and Trademark Office. To review today's granted patent claims and details, see US Number 8,425,243.

Whether Apple will advance their new lighting connector to include this feature in future iDevices is unknown at this time. 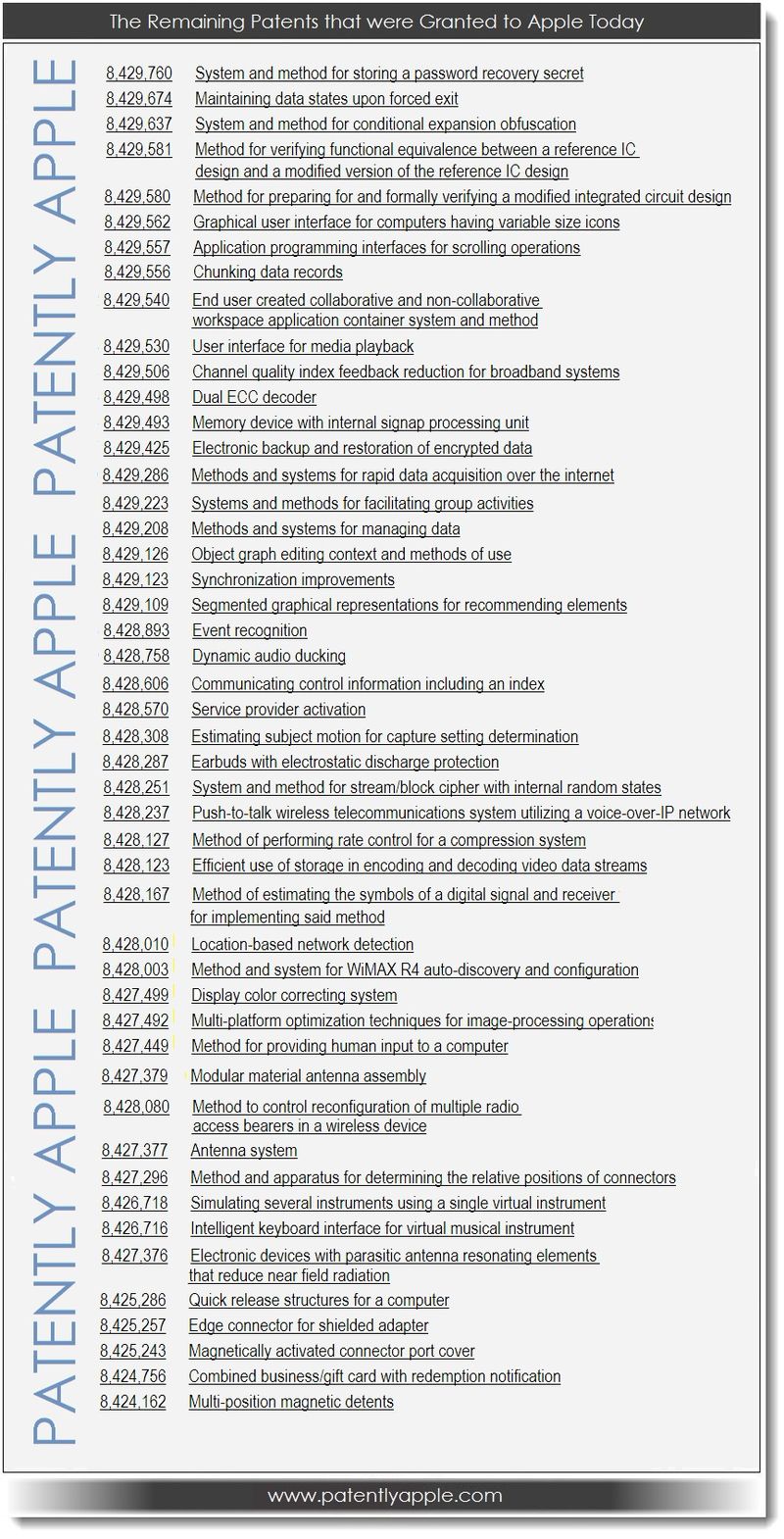