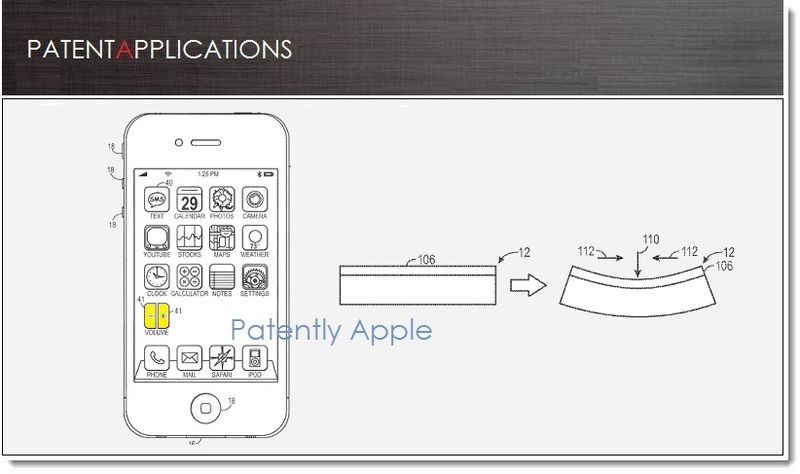 Last week the US Patent & Trademark Office published a series of patent applications from Apple covering some of their manufacturing processes, minor tweaks and more. Our patent report covers more than eight patent applications covering such things as Apple's pressure sensors that may be found in a next generation of their EarPods, display fracture and deformation systems regarding iDevices, a tampering detection system, an iDevice laser texturizing process and much more.


Detecting Tampering of an Electronic Device

One of Apple's inventions published last week generally relates to techniques for detecting the occurrence of consumer abuse in electronic devices.

One of Apple's examples of tampering detection is found in Apple's patent FIG. 1 where we see an elevation view of the inside of the housing of an electronic device, showing an opened chassis with a tamper sensor mechanism. The electronic device may be a desktop computer, a notebook/laptop computer, a personal digital assistant, a tablet computer, a smart phone, or any other consumer electronics device that is likely to be tampered with by an end user or consumer.

System for the Detection of Display Fractures 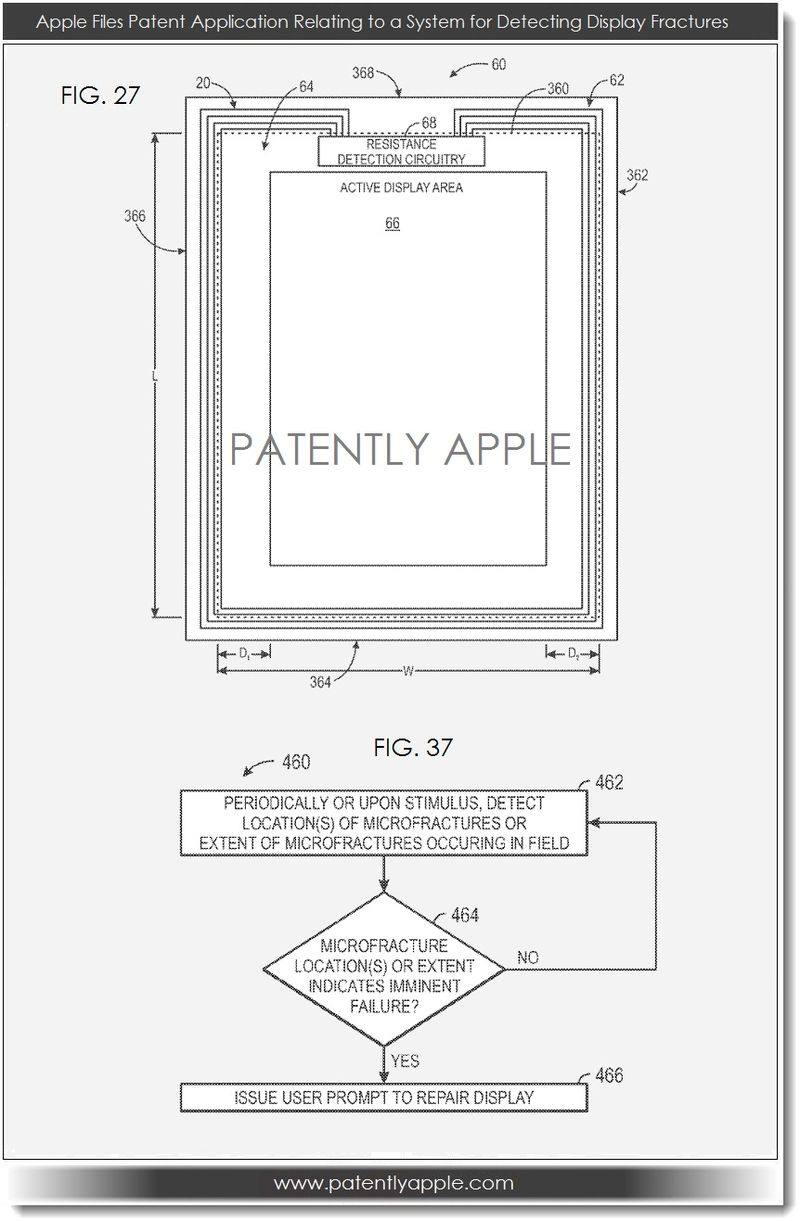 Apple's patent FIG. 37 is a flowchart describing a method for warning an electronic device user when a microfracture of a display panel indicates eminent display failure.

A Process Patent for Accurately Removing Material from a Curved, Cosmetic Surface Such as an iPad 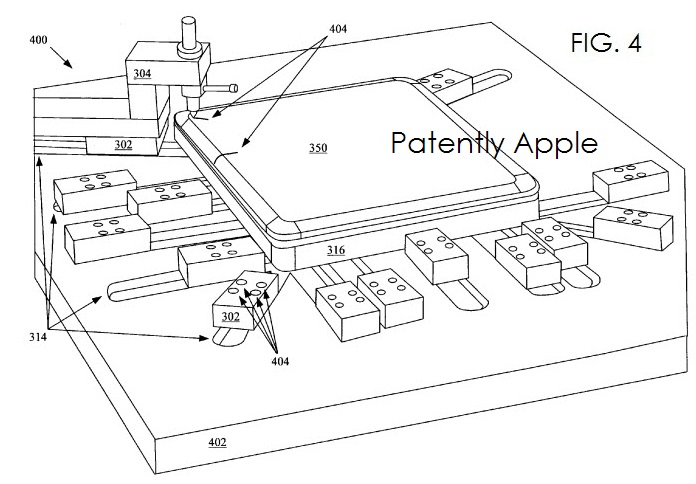 One of Apple's new process centric patent applications relates to refining polishing operations for cosmetic surfaces of a three dimensional object having cosmetic curved surfaces. More particularly, a method and an apparatus are described for accurately removing material from a curved, cosmetic surface of a housing during a polishing operation. In another embodiment an apparatus for scribing optically readable scribe marks into a curved surface of a housing is disclosed.

Another patent application about a similar manufacturing process is noted in a patent titled Laser Texturizing and Anodization Surface Treatment. 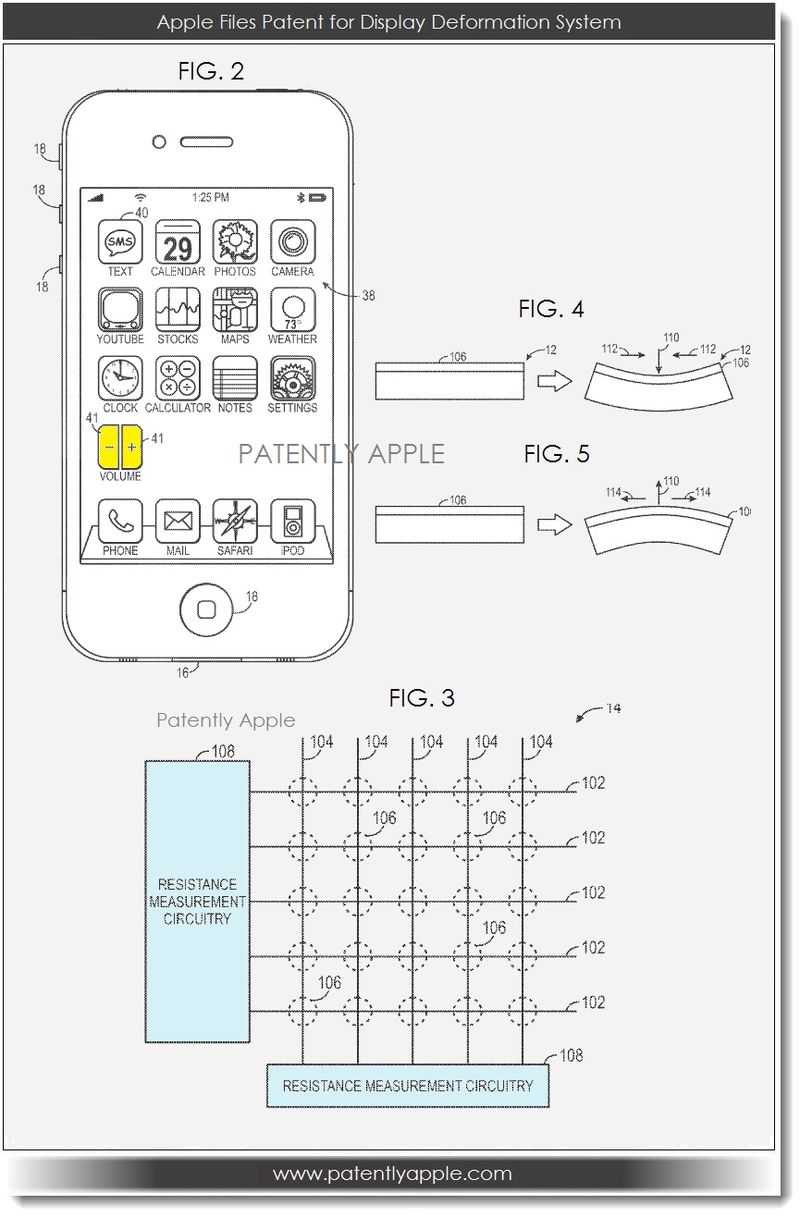 As a side note, Apple's patent FIG. 1 presents a new "Volume" icon that's interesting. That may be hinting that Apple is considering dropping the iPhone's physical volume buttons in favor of virtual controls. Another form of this idea was presented in last week's patent report revealing a possible future iPhone with wraparound display. 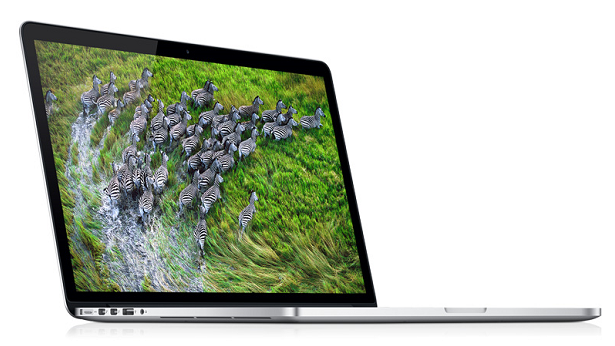 The process behind Apple's cool edge-to-edge display appearance that is found on all MacBooks and iDevices is revealed in this latest patent filing.

Technically, the invention is about a system and methods to extending the overall display area for a device. At or near the borders of a device, pixel pitch between adjacent pixels may be increased such that overall pixel placement may be provided closer to a border of a display of a device.

In one embodiment, pixel drive circuitry may be located in the spacing between adjacent pixels. Additionally, various optical systems and techniques may be utilized to provide an appearance of a lack of a border around the display such as decreasing the size of border pixels, overdriving the border pixels, or utilizing a light pipe on a surface above the border pixels.

The impression that is given with mention of "zero border display" is that the minor black border around current displays may be even thinner in the future. To review this patent's details and 20 patent claims, see patent application 20130083080.

A new Apple patent application surfaced this week covering another aspect of Apple's EarPods. In September five EarPod related patents surfaced and in January of this year another one surfaced. This may be a patent concerning a future system or it could be another patent covering the original product. We point out the feature that is in question.

The headset also includes a processor electrically coupled to the headset and is operative to receive signals from the plurality of pressure sensors and determine a size of a user's ear. The headset can adjust a volume profile of audio signals being provided to the at least one earbud based on the determined size. As used herein, a volume profile can refer to the amount by which volume levels are adjusted over a frequency range to optimize sound playback for a particular frequency response. 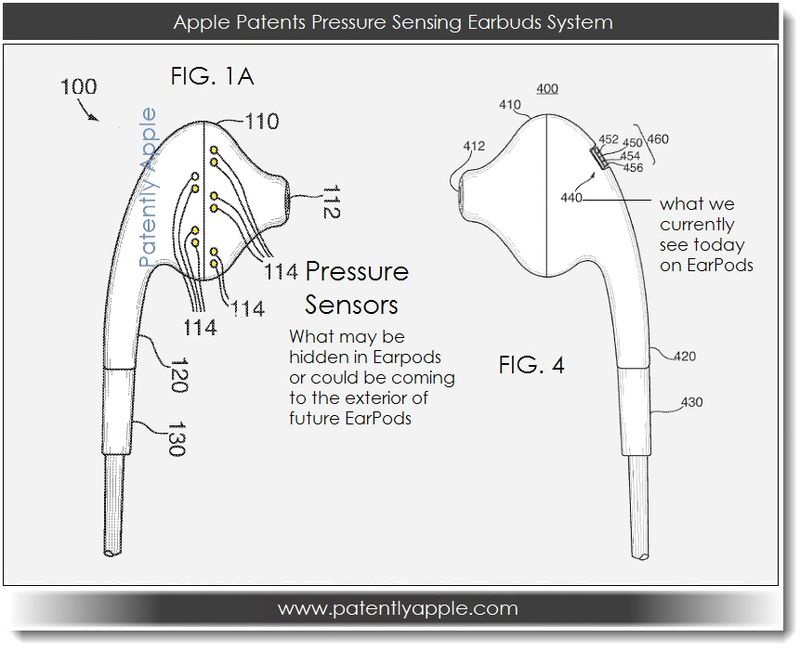 According to Apple's patent filing, "Pressure Sensors" noted above in patent FIG. 1 as #114, "can be arranged on or in earbud where earbud is likely to come in contact with the user's ear."

Because Apple claims that the pressure sensors could be arranged either as a visible or invisible system, it difficult to ascertain if the current EarPods have incorporated under its shell or if this is technology aimed at a future version of EarPods. Apple's literature doesn't promote this feature using this same terminology, so it further complicates the call as to whether this is currently employed or yet to come.

Other obscure aspects behind the manufacturing process or features integrate into iDevices are presented in patents 20130082908 and 20130083928 which respectively cover Integrated Thermal Spreading and Speaker Temperature Control. And lastly, Apple has filed a minor patent regarding the tweaking of their pedometer feature that's a part of their Nike + iPod application. Patent application 20130085711 discusses improving the accuracy of their pedometer. It's difficult to say if this tweak has been already presented in a software upgrade or whether this will be quietly introduced with Apple's next iPhone and iOS upgrade.